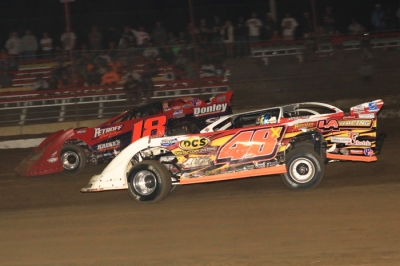 QUINCY, Ill. (July 2) — Shannon Babb of Moweaqua, Ill., topped a back-and-forth battle with Brian Shirley of Chatham, Ill., midway through the Tuesday’s UMP DIRTcar Summernationals main event at Quincy Speedway and led the second half of the 40-lap race for his second victory on the month-long series.

The fourth-starting Babb took the lead for good from Shirley on lap 22 and pulled away through traffic over the remaining distance on his way to claiming $5,000 in the 13th leg of the 31-race tour. Shirley settled for second, holding off a late charge from Bobby Pierce of Oakwood, Ill. | Complete Summernationals coverage

Polesitter Brian Diveley of Springfield, Ill., slid back to fourth at the finish, while series points leader Brandon Sheppard of New Berlin, Ill., advanced from the 12th starting spot to finish fifth in a race slowed by one caution.

While Shirley got out front on the start of the race, Babb also showed his speed early with a high-side charge to move around by Pierce and Diveley into second by lap seven.

Continuing to run the track’s high groove, Babb quickly erased Shirley’s half-straightaway lead and began looking under the leader on lap 10. Babb made multiple low-side attempts to get by Shirley but came up empty each time.

A move back to the high side just before the leaders caught lapped traffic gave Babb the run he needed as he charged around Shirley though turns one and two on lap 15 and pulled ahead down the back straightaway.

Shirley battled back after losing the lead, keeping pace with Babb before pulling back ahead on lap 21. The two leaders were side by side as they caught the slower car of Jerry Lierly on the next lap and contact between Lierly and Shirley allowed Babb to pull ahead for good.

Babb pulled away as the second half of the race ran caution free, cruising to the 78th Summernationals victory of his career.

Tuesday’s race was the first in a stretch of six races in six nights for the tour. Action moves to Jacksonville (Ill.) Speedway Wednesday for another $5,000-to-win event.

Shannon Babb dominated the fourth and final heat, leaving Ryan Unzicker and Brandon Sheppard to battle for second. Sheppard pressured Unzicker the entire distance, with the two cars running side by side through the final two laps. But the low-running Sheppard couldn’t get a run strong enough to take the spot, settling for third with Denny Woodworth a distant fourth to also make the feature lineup.

Polesitter Brian Diveley got the jump on Terry English on the start of the third heat and held of challenges from Scott Schmitt and Tyler Reddick in leading the caution-free race all the way. Schmitt and Reddick both moved by English early and chased down Diveley by halfway. Schmitt took multiple looks under Diveley, but a push exiting turn four with two laps to go cost him the second spot. Diveley topped Reddick at the finish with Schmitt third. Jerry Lierly moved by Terry English midway through to earn the final transfer spot.

Bobby Pierce dominated the second heat, winning the caution-free race by nearly a straightaway. Rickey Frankel used a strong move to jump from fourth to second early, topping Kevin Weaver at the finish, while Clint Kirkham outdueled Michael Long for the fourth and final transfer position. Outside polesitter Dustin Griffin pushed hard through the first corner and dropped to sixth on the opening lap. He struggled the rest of the way, finishing eighth.

Polesitter Brian Shirley cruised in the first of four heat races, leading every lap of the caution-free 10-lapper. Jason Perry kept Shirley in his sights but couldn’t get close enough to mount a series challenge. Frank Heckenast Jr. was farther back in third with Randy Korte grabbing the fourth and final transfer spot.

Looking to keep the momentum of his first series victory rolling, Bobby Pierce of Oakwood, Ill., topped 37 qualifiers for Tuesday’s UMP DIRTcar Summernationals event at Quincy Raceway with a lap of 14.025 seconds around the 3/8-mile track.

Pierce, who won the month-long tour’s most recent event Sunday at Lincoln (Ill.) Speedway, will start from the pole of one of four heat races coming up. Other heat race polesitters after group qualifying: Brian Shirley of Chatham, Ill.; Brian Diveley of Springfield, Ill.; and Shannon Babb of Moweaqua, Ill.

Each 10-lap heat will transfer the top four finishers into the main event with the heat winners all redrawing for their starting spots. Two more drivers will make the feature through consolation races with four provisional starters rounding out the 22-car starting field.

Brandon Sheppard of New Berlin, Ill., leads the series standings with 807 points. Fresh off his first series victory Sunday at Lincoln (Ill.) Speedway, Bobby Pierce of Oakwood, Ill., is tied with Ryan Unzicker of El Paso, Ill., for second at 713 points. Three-time series champion Shannon Babb (679) of Moweaqua, Ill., is fourth with Randy Korte (571) of Highland, Ill., fifth. ... Quincy is hosting it’s sixth Summernationals event. All the tour’s visits to the track have come since 2006. ... Brian Shirley, who is competing tonight in Tim Lance's backup car, won last year’s race at Quincy with Shannon Babb (’07 and ’09) and Randy Korte (’06) among the other former winners competing tonight. ... Two former Summernationals race-winning drivers are at tonight’s event as crew members for other drivers. Scott James of Lawrenceburg, Ind., is assisting Todd Frank while Jon Henry of Ada, Ohio, is crewing for Frank Heckenast Jr. Henry plans to travel with Heckenast as he makes sporadic Summernationals appearances over the next 10 days before entering the tour’s final two events at Attica (Ohio) Raceway Park and Oakshade Raceway in Wauseon, Ohio. James plans to spend the next week working with Frank, while his Warrior house car team takes some time off. ... The father-son due of Terry and Tanner English of Benton, Ky., are still with the tour. They started with the series last week at Clarksville and plan to run through Sunday’s race at Tri-State Speedway in Haubstadt, Ind. Tanner is making his first appearance at Quincy, while Terry visited the track once a few years ago. ... Former series regular Jerry Lierly of Camp Point, Ill., is making his second appearance on this year’s tour at his home track.