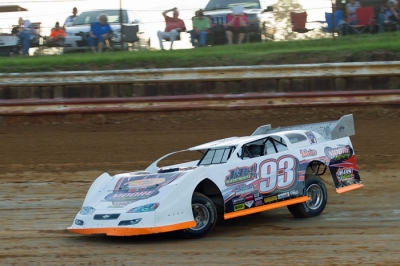 CHATHAM, La. (June 29) — For the second straight week, Ray Moore picked up a home-state victory as the Haughton, La., driver finds his groove with weekly tuneups. Moore earned $1,000 at the newly reopened Chatham Raceway on Saturday, outrunning Robbie Stuart of DeRidder, La., by nearly three-seconds in a 25-lap feature.

Moore led flag-to-flag in the 14-car race that marked the return of Late Models to the quarter-mile oval that’s now under the guidance of Jerry Hobson. The Chatham victory followed his victorious $1,200 payday a week earlier at Boothill Speedway near Shreveport, La., as a Moore continues to shake off struggles and get his racing program back into form.

"It been real good these last couple of weeks. I think we have finally found the few things that wasn't to my liking on this white car,” Moore said. “Everybody has been telling me to put it down, put this car to the side and to get back into my primary cars, but I knew this car had potential — it's serial No. 28.

“I could tell it had the potential from driving it, I just had to work the bugs out and it has taken several months to get to this point. It has been a lot of hours and a lot of hard work, but the last two weeks we have been talking to Jimmy (Mars), Chris (Mars) and Brian (Birkhofer), trying to get this white car going and it looks like we have stumbled onto something now. It is working really good.”

At the outset, polesitter Jay Brunson and fellow front-row starting Moore went door-to-door into turn two, drag racing down the back straightaway for the lead.

Moore led lap one, followed by Brunson, Robbie Stuart, Lee Patton and Chris Huckabay. Moore continued at the point, but after a back-and-forth battle, Stuart moved into second over Brunson.

On the seventh lap, Troy Berdan charged into the top five, getting by Chris Patton. Moore reached lapped traffic two circuits later, easing out to almost a three-second advantage on Stuart.

At halfway, Moore managed to keep a lapped car between his No. 93 and Stuart, giving him a little cushion. Brunson pressured Stuart for second, but the strong run for Lee Patton’s No. 510 came to an end when he pulled out on lap 18, giving up the fourth spot.

The lone caution would fly with just five laps remaining when Bubba Mullins spun in turn two. On the restart, Moore responded by pulling away once again from the side-by-side battle of Stuart and Brunson.

Brunson emerged with the position, but Stuart answered with a pass of his own. A four-way free-for-all for the runner-up spot ensued, with Jeff Chanler and Troy Berdan entering into the picture. Stuart edged ahead for second, but Moore was out of reach.

On the white flag lap, Berdan pushed Brunson to fourth, as Chanler trailed close by in fifth. Moore would grabbed the checkered flags over Stuart, with a blanket draped over third through fifth in the final running order.

Notes: Moore's MB Customs Race Car is powered by a Jay Dickens Racing Engine and sponsored by Moore Wireline, J&J Motorsports, Mars Race Cars, Hoosier Racing Tires, X-Treme Graphics by J-Rod, Smith's Towing and Tools International. ... Moore has six top-five finishes in 12 starts in 2013. ... He plans to return to the Mars Race Cars shop in Menomonie, Wis., to pick up a new MB Customs machine later this season. “I am looking forward to that, getting into a newer chassis and try to see if we can go forward and take advantage of some of this momentum we are having,” he said. ... The 10-minute feature was slowed by one caution and ended at 11:14 pm. ... Jeff Chanler of Minden, La., was the event's biggest mover, going from 11th-to-fifth. ... Bubba Mullins of West Monroe, La., piloted the No. 58 normally driven by Heath Culp of Shreveport. ... Mullins, who finished 13th, was among three former Chatham track champions on hand along with Nicholas Brown of Hodge, La., (sixth) and Raymond Taylor of Ball, La. (11th). ... Trey Beene of Bossier City, La., scratched from the feature because his car sustained nosepiece damage in prelims. ... Taking over in late May, Jerry Hobson of Sterlington, La., has become the third different leasee at Chatham in the last year, following Ricky Henderson and Jerry Jones. Hobson opened USA Speedway in Sterlington in early 2010, before having to shut the speedway down because of court injunctions citing noise and reduction of health concerns of nearby residents. ... Hobson’s staff widened turns three and four to 80 feet from 55 feet and graded turns one and two, removing multiple sandy spots. The straightaways were widened to 65 feet and the flagstand moved back to the original grandstand side of the facility. ... Despite the changes, Moore said “as far as the way it raced, it really raced like the same ol' Chatham.” Some ruts plagued drivers, but Moore survived it. “If this staff can work those holes out and keep the track clean and dusted off, then it is going to be a lot more two-wide racing throughout the feature, a lot more than what it was tonight,” he said. ... The track plans more Late Model dates. ... The track owned by Billy Bagwell has had many names, including Jones Motor Speedway, Fast Trax Speedway, Fast Trax Motorplex, Louisiana Motor Speedway and Super Bee Speedway.