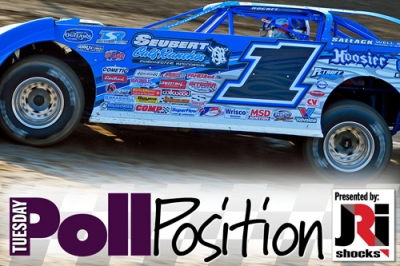 After scoring an unprecedented sweep of Firecracker 100 action at Lernerville Speedway in Sarver, Pa., Josh Richards of Shinston, W.Va., was voted a unanimous No. 1 in DirtonDirt.com’s Top 25 power rankings presented by JRi Shocks.

Richards, who has held the top spot for ten consecutive weeks, left no doubt in claiming all three World of Outlaws Late Model Series events at held at 4/10-mile, Pennsylvania oval and pocketing more than $42,000.

Brandon Sheppard of New Berlin, Ill, is the biggest mover of the week. The Summernationals points leader roared up seven spots after notching back-to-back victories for the second time on tour and clicking off more consistent finishes up front.

Bobby Pierce, 16, is the lone newcomer in this week's poll. The Oakwood, Ill., driver makes his first appearance since June 4's polling, after becoming the youngest winner in Summernationals history on Sunday at Lincoln (Ill.) Speedway.

Comment: Solid all weekend, but another bittersweet podium finish in the Firecracker finale leaves him at a loss for words. Series points: 3rd (World of Outlaws). Last week's ranking: 2nd (nc)

Comment: Former Firecracker champ is out of his element all weekend on Lernerville's rain-soaked surface. Series points: None. Last week's ranking: 10th (nc)