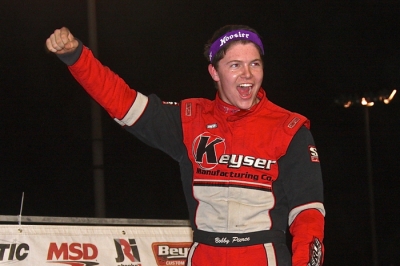 LINCOLN, Ill. (June 30) — Bobby Pierce made sure his first-ever UMP DIRTcar Summernationals victory was a convincing one.

Winning for the first time on the popular month-long Midwestern tour, Pierce, 16, of Oakwood, Ill., dominated Sunday’s Brandt 60 at Lincoln Speedway, building a nearly half-track lead on his way to earning $10,000 at the quarter-mile fairgrounds oval. | Complete Summernationals coverage

“We’ve been trying so hard to do this, getting top fives and coming close,” said Pierce, the teenage some of legendary Illinois racer and chassis builder Bob Pierce. “It’s so hard to win these things; you’ve got the best of the best. I’m so glad to finally get one. It’s amazing.”

Starting from the outside pole, Pierce took the lead from Shannon Babb of Moweaqua, Ill., on lap nine of the 60-lap race and cruised through the remaining distance. He topped former series champion Don O’Neal of Martinsville, Ind., at the finish, becoming the youngest driver to ever win a Summernationals event.

Advancing from the 12th starting spot, O’Neal settled for second with series points leader Brandon Sheppard of New Berlin, Ill., finishing third after starting from the pole and leading the first four laps of the race. Provisional starter Ryan Unzicker of El Paso, Ill., came from 19th to finish fourth with Brian Shirley of Chatham, Ill., rounding out the top five in a race slowed by just one caution.

While Pierce dominated the majority of the race, it was Babb who looked to have the best car during the early going. The three-time series champion roared from his sixth starting spot, rallying around Sheppard and Pierce for the lead on lap five.

But the low-running Pierce challenged back, moving by Sheppard for second on lap six and pulling alongside Babb the next circuit. The two drivers raced side by side for the next two laps with Pierce pulling ahead at the flag stand on lap nine.

Pierce cruised from there, opening a half-straightaway lead by the time he reached lapped traffic just before lap 15, then stretching it to a straightaway by lap 20 as he deftly worked his way through the slower cars.

Pierce had a close call on lap 24 when he got into the back of the slower car of Jason McBride in turn four, sending McBride spinning directly in front of him. But Pierce was able to sneak around McBride and maintained the lead.

After a brief challenge from Babb on the restart, Pierce once again flexed his muscle, building more than a straightaway advantage by the time O’Neal got by Babb for second on lap 38.

Pierce only increased his lead through the rest of the way, lapping all the way to the ninth spot as the second half of the race rain caution free.

Sunday’s race, the 12th on this year’s planned 31-race schedule, was the first in a stretch of six straight races in Illinois. After an off day on Monday, the tour moves to Quincy (Ill.) Raceway for a $5,000-to-win race on Tuesday.

Looking to return to victory lane at the location of his first-ever Summernationals victory, Brandon Sheppard will lead the 60-lap main event to green. Sheppard, the series points leader drew the pole in a redraw among heat race winners. Bobby Pierce will join Sheppard on the front row with Dustin Griffin and Tyler Reddick sharing the second row. ... Ryan Unzicker will use a series provisional to start the main event from the 19th spot with track provisional Rich Bell starting 20th. Daren Friedman will use then UMP points provisional to start 21st with Jason McBride using the second series provisional to round out the 22-car starting field.

Scott Schmitt claimed the 12-lap B-main, earning the 17th starting spot for tonight's main event. Schmitt and Terry English pulled away from the rest of the field in claiming the race's two transfer spots.

Earning a starting spot in the B-main, Todd Bennett led every lap of the first C-main with second-finishing Joseph Joiner also transferring to the next consy. Bob Geiger won the second C-main with Jason McBride second.

Bobby Pierce shot from third to first when polesitter Brian Diveley bobbled exiting turn two on the second lap and held off second-starting Brian Shirley in leading the remainder of the caution-free race. Shirley settled for a close second-place finish with Don O'Neal third. Diveley fell back early, but held on to fourth at the finish. He'll join the top three in transferring to the main event.

Benefitting from a complete restart that negated his terrible start, polesitter Dustin Griffin turned back Tanner English's mid-race challenge on his way to claiming the third heat race. The third-starting English rallied on the low side to pass Griffin on lap five, but Griffin charged back and retook the lead on the next lap. English chased Griffin the remaining distance, but couldn't mount another strong challenge. Bobby Dauderman was third with Steve Sheppard Jr. rallying to climb the fourth and final transfer spot. Sheppard Jr. stopped on the back straightaway on the first lap to cause a complete restart. Ryan Unzicker spun from the fourth spot to bring out the second caution with two laps complete.

Second-starting Brandon Sheppard outdueled fellow front-row starter Shannon Babb in the opening laps and again on a midrace restart in leading every lap of the second 10-lapper. Babb chased Sheppard early, but faded a half straightaway back in settling for second. Kevin Weaver was just behind Babb in third with Rusty Schlenk also transferring to the main event. Michael Kloos's solid run ended badly when he jumped the cushion and climbed the wall in turn four, giving up the fourth spot.

Polesitter Tyler Reddick cruised in the first 10-lap heat race, leading as he built more than a straightaway advantage in a race slowed by two cautions. Jack Sullivan finished second, holding off third-finishing Randy Korte. Eric Smith grabbed the fourth and final transfer spot. The first caution waved with just one lap complete when Billy Drake spun. Greg Kimmons brought out the red flag when he jumped the cushion and climbed the wall in turn four, leaving his No. 27 machine perched on top of the concrete.

Babb, the three-time series champion and former series winner at Lincoln, will start from the pole of one of four heat races coming up. Other heat polesitters after group qualifying: Tyler Reddick of Corning, Calif.; Dustin Griffin of Camp Point, Ill.; and Brian Diveley of Springfield, Ill.

Qualifying action was slowed during the second of the four groups when Dennis Erb Jr. got into the tour-four wall on his warm-up lap, causing heavy cosmetic damage to the nose of his race car. He pulled off with out recording a time.

Todd Frank jumped the cushion and spun in the third group, causing another stoppage. Rick Standridge ran into trouble in the fourth group when he jumped the turn-four cushion and climbed the wall. He continued running, but the incident left his car with rear damage.

Brandon Sheppard of New Berlin, Ill., leads the series into the event. But with his runner-up finish in the tour’s race Saturday in Paducah, Ky., second-place Ryan Unzicker of El Paso, Ill., has cut Sheppard’s lead to 89 points. Bobby Pierce of Oakwood, Ill., is third, 104 points out of the lead, followed by Shannon Babb (-111) of Moweaqua, Ill., and Randy Korte (-209) of Highland, Ill. ... Tonight’s event was originally scheduled as a $5,000-to-win race, but sponoship from Pleasant Plains-Ill.-based Brandt Agriculture Products boosted the purse money and laps. In honor of Brandt's 60th anniversary, both Late Models and UMP Modifieds will run 60-lap features. The modified feature pays $2,000 to the winner. ... Don O’Neal of Martinsville, Ind., has stuck with the series for another night, switching to an older car from the Moring Motorsports stable. O’Neal, who has struggled of late, is confident in the car. “Every time we unload it, it’s usually fast,” said O’Neal, who drove the team’s other car to a disappointing 11th-place finish Saturday night at Paducah. “It should be better. We can’t be much worse than we were the other night.” ... IMCA Late Model veteran Ray Guss Jr. of Milan, Ill., is making the first of a handful of his planned Summernationals appearances. The three-time reigning IMCA weekly points champion plans to also enter the tour’s event at La Salle (Ill.) Speedway this week. ... Current UMP national points leader Rusty Schlenk of Weston, Ohio, is back with the tour for the first time since a week ago at I-96 Speedway in Lake Odessa, Mich. ... Joining Dillon Wood as the only Florida driver's to compete on this year's series, Joseph Joiner of Milton, Fla., is making his Summernationals debut. ... NASCAR Nationwide Series driver Justin Allgaier of nearby Riverton, Ill., and his Brandt-sponsored No. 31 car are at the event with Allgaier, who plans to race a modified tonight, is hosting an autograph session before the start of the night’s program. ... Lincoln is hosting its sixth Summernationals race. The tour first visited the track in 2005 and every year from 2006-11. Last year’s race was cancelled due to extreme heat. ... Brandon Sheppard won the most-recent series race here in 2011 for his first-ever tour victory. ... Other former winners in attendance tonight include Randy Korte (’09), Brian Shirley (’08), Don O’Neal (07) and Shannon Babb (’05). ... No driver has won the event multiple times.