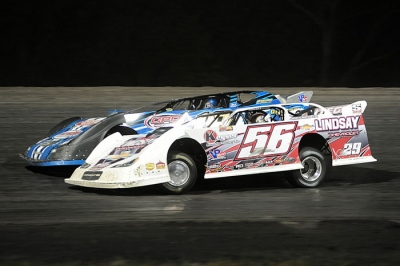 On a night when 46 Late Models crowded the pits from the Corn Belt Clash, Lucas Oil Midwest LateModel Racing Association and MARS DIRTcar Series, Jackson overtook Ryan Gustin of Marshalltown, Iowa, on the 15th lap and led the rest of the way at the half-mile oval. | Video | Slideshow

"This race car has been awesome ever since we got it from (two-time World of Outlaws champion) Darrell (Lanigan),” Jackson said. “I tried to get Gustin there on the start, and he got by me. He messed up that one time and got off the bottom, and I got him. I just knew that if I could drive my race and stay on the bottom, I'd have to mess up for Chris to get me.”

Gustin, a tri-sanctioned winner the previous night at I-80 Speedway in Greenwood, Neb., led from the outset, but Jackson repeatedly worked the low groove and moved under Gustin to take command.

Chris Simpson of Oxford, Iowa, provided a challenge with four laps remaining, but Jackson turned him back. Simpson settled for second while six-time MARS champion Terry Phillips of Springfield, Mo., and three-time Corn Belt Clash champion Chad Simpson of Mount Vernon, Iowa, were third and fourth. Gustin slipped back to on the final restart.

Jackson has clicked off five victories with four regional tours since a Memorial Day weekend victory in Monett, Mo.

“This race car is awesome,” Jackson said. I’ve got a brand new one at the shop and I don’t even want to race it. I can’t think Darrell enough. He tells me everything that he knows and it’s made a huge difference in my racing program. When I get to the racetrack, I know I’ve got a chance to win, and it’s just awesome.”