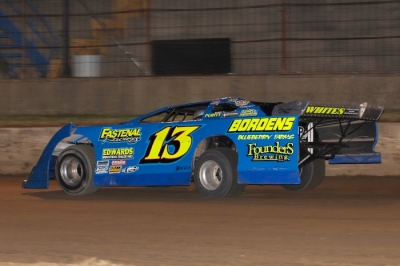 In trying to catch Hotovy, Thirlby climbed the turn-one wall and rolled his No. m14; he wasn’t injured but his race was over.

Notes: Hotovy’s No. 13 is sponsored by S&S Agriculture, Borden’s Blueberry Farms, Founders Brewing and Allstar Performance. ... Hartford, now open only for special events under the promotership of the Hotovys, was formerly owned by the winner’s father-in-law Jim Borden, who died May 24 after a long battle with cancer. He was 63. ... In tribute to Borden, Rick Beebe pointed skyward while waving the checkered flag and all the cars stopped on the track following the feature. ... Hotovy’s wife Becky and mother-in-law Patti Borden were among those in victory lane. ... Hotovy was also leading the modified feature when a broken radiator hose forced him out. ... The Michigan Dirt Cup takes a break before returning to action with a two-race weekend July 12-13 at Mount Pleasant (Mich.) Speedway and I-96 Speedway in Lake Odessa.