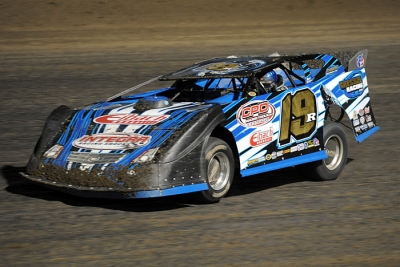 Ryan Gustin heads for victory at I-80 Speedway. (Todd Boyd)

GREENWOOD, Neb. (June 28) — Modified ace Ryan Gustin of Marshalltown, Iowa, has been running more and more Late Model events in 2013, and the 23-year-old is enjoying the step up to the full-fender machines.

“It’s a blast man, I love these things,” Gustin said Friday night at I-80 Speedway. “They’re night and day difference between the modified. It’s definitely a game-changer.” | Video | Slideshow

It’s Gustin whose been changing the game lately with recent Late Model victories, including Friday’s $3,700 payday in an Alphabet Soup Classic event that drew an impressive 49 entrants to a tri-sanctioned race.

Starting on the pole and briefly slipping back to third in the 35-lap feature, Gustin caught fellow front row starter Tommy Weder Jr. of Woodward, Okla., in lapped traffic and stayed in control the rest of the way at the 4/10-mile oval for a victory on the MARS DIRTcar Series, Lucas Oil Midwest LateModel Racing Association and Corn Belt Clash circuits.

“I knew we had a good car right off the bat,” said Gustin, who notched his third career Late Model victory, all in the last five weeks. “I was down there circling around the bottom trying to catch some of the moisture off the corners. I’m used to have to catching that little bit with the small mod tires.”

Gustin led the first lap before Weder went out front and built a half-straightaway lead early, but as the frontrunners approached a pack of slower cars on lap 15, Gustin didn’t hesitate, driving hard inside turn three to emerge in turn four with the lead.

“Once we got going, I kind of ran him down and got him in lapped traffic, and used that to our advantage — and tried not to look back,” Gustin said. “I was really good there on the bottom down there in (turns) three and four. I could drive it in hard and all that moisture would catch you. (Weder) was going to drive in there and diamond back off, I think, and I just drove 'er in there wide open.”

Home-state drivers Travis Dickes of Madison (sixth) and Kyle Berck of Marquette (eighth) were among the front runners early before slipping back, while six-time MARS champion Terry Phillips of Springfield, Mo., stormed from deep in the field to finish seventh.

After Gustin overtook Weder, he was solidly in control the rest of the way, but he did have a scare. With less than two laps remaining, Gustin was exiting turn two when the slower car of Brunson Behring spun nearly in front of him. He was able to slip past underneath unscathed, then won the two-lap shootout to the checkers.

The tri-sanctioned weekend continues Saturday with a $5,000-to-win event at Adams County Speedwy in Corning, Iowa.