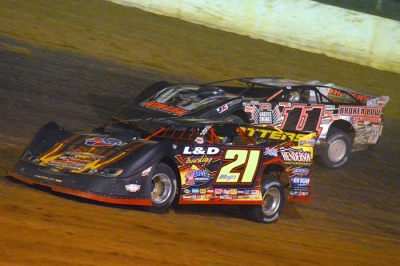 Billy Moyer (21) moves by Tyler Reddick on his way to victory. (dt52photos.com)

Moyer, the tour’s all-time winningest driver and six-time champion, overtook polesitter Tyler Reddick of Corning, Calif., on lap 19 of the 40-lap event and held off Ryan Unzicker of El Paso, Ill., through the remaining distance of the caution-free race in claiming his first victory in three appearances on the this year’s version of the month-long series.

“It’s been a long time coming,” said Moyer, who earned his fourth overall victory of the season and his first since March 6. “We’ve had a horrible year, but we haven’t given up. We just keep working hard. My guys work their tales off. We keep trying things and sometimes you go backward before you go forward.”

Unzicker chased Moyer through the second half of the race and looked to make a late challenge as the leaders approached heavy traffic in the closing laps. But he came up short in settling for the runner-up finish.

Reddick led the race’s opening laps, but he began to fade just after the 10-lap mark. Second-running Unzicker was the first to catch Reddick and began to look under him by lap 16. With Moyer just behind the two leaders, Unzicker pulled alongside Reddick in turns three and four on lap 17, but Unzicker backed off exiting the corner instead of pushing the issue.

That gave Moyer all the opportunity he needed. Unzicker’s lost momentum allowed the low-running Moyer to pull even with him down the front straightaway, and he complete the pass in turns one and two.

A lap later, Moyer used a turn-three slidejob to overtake Reddick for the lead and never looked back.

“Everybody got bunched up there and it was hard to pass,” said Moyer, who recorded the 82nd Summernationals victory of his career. “We just kinda had to tip-toe there at first, but then it got better a little bit and we stayed at it. I ran a little lower than they did and got it to stick.”

Unzicker felt he had a car capable of beating of Moyer, but felt he may have cost himself the race when he didn’t try harder to by Reddick on lap 17.

“I feel like if we’d been a little bit more aggressive going into three down there we could’ve won the race,” said Unzicker, who was looking for his second victory on this year’s tour. “I probably could’ve raced (Reddick) a little harder, but I was trying to give him room. Once I slowed down to try to go underneath him, we let (Moyer) sneak by us.”

Looking for his first Summernationals victory, Tyler Reddick will lead the field to green for the start of the 50-lap main event. Reddick drew the pole in a redraw among heat winners with Tim Brown drawing the outside pole. Billy Moyer and Ryan Unzicker will share the second row. ... Tyler Reddick is feeling good about his chances in tonight’s main event. Racing at a track he typically struggles at, Reddick believes he can turn around his recent string of bad luck with a strong run tonight. “It’s unexpected, but we’ve got a really good car tonight,” he said. “It’s crazy because we usually struggle just to make the show here.” ... An electrical problem was to blame for Scott James’ departure while leading his heat race. Loaded up for the night, James leaves Paducah extremely disappointed. “I really think we had the car to beat tonight,” said James. “But that’s usually when this kind of stuff happens — when you’re really good.” ... Brian Shirley said there was no contact between he and Reddick when a close encounter between the two drivers ended with Shirley getting into the tour-four wall during his heat race. “He just switched grooves and came up in front of me,” said Shirley. “It must’ve disrupted the air or something because it just sucked me right into the wall.” ... After finishing fourth in his heat race, Don O’Neal knows he’s got some work to do. “We just gotta get faster,” he said. “We’re gonna through some stuff at it and see what happens.” ... Provisional starters are Dustin Griffin, Brian Shirley, Kevin Weaver, and Jason Riggs.

Jason McBride cruised in the 12-lap B-main, leading every lap to earn the 17th starting spot for the main event. While McBride pulled away, Kevin Cole topped a tight battle between Jason Riggs, Kevin Weaver and Timothy Culp to finish second and grab the race's other feature transfer.

Second-starting Tim Brown outdueled polesitter Bobby Pierce in a back-and-forth battle to claim the fourth and final 10-lap heat race. After getting the jump on the race's initial start, Brown pulled away through the opening laps before Pierce mounted a high-side run to reel him in just after halfway. Pierce pulled alongside Brown on the back straightaway on lap nine and muscled his way into the lead when both drivers ran low in turns three and four. But Brown battled back, powering around turns one and two on the final lap to pull alongside Pierce before pulling ahead in the final corner. Pierce settled for second with Wendell Wallace and Dillon Wood grabbing the other feature transfers.

Regaining the lead when Scott James broke on lap five, polesitter Tyler Reddick led the remainder of the third 10-lap heat in topping Shannon Babb at the finish. Riley Hickman and Don O'Neal grabbed the other two transfer spots in a race with only four finishers. The race's early laps produced a four-car battle for the lead with Reddick out front and Brian Shirley, James and Babb all side by side just behind him. They ran that way for two laps, but Reddick's switch to the high groove caught Shirley off guard and resulted in Shirley getting into the wall in turns three and four. He pulled off the track under the ensuing caution. The second-running James powered around Reddick in turn one on the restart, but his run came to an end when he slowed on the front straightaway on the next lap. Reddick pulled away from Babb from there. The first attempt to start the race was waved off when Reddick got a great jump and Hickman was shuffled back to fourth by the end of the front straightaway. The race slowed again when Chris Shelton and Todd Frank got together in turn one on the second lap.

Polesitter Billy Moyer cruised in the second 10-lap prelim, building nearly a straightaway advantage in leading every lap of the caution-free race. Terry English used a slidejob through the final corner to get by Kent Robinson for second while Randy Korte topped Kevin Weaver and Timothy Culp for the fourth and final transfer spot.

Ryan Unzicker came out on top of a three-wide battle for the lead on the opening lap, pulling ahead of Jack Sullivan and Brandon Sheppard at the flag stand on his way to leading every lap of the caution-free 10-lapper. Unzicker built a half-straightaway advantage by the finish, while Sullivan turned back Sheppard's repeated challenges to finish second. Sheppard settled for third with Tanner English claiming the fourth and final transfer spot.

Billy Moyer of Batesville, Ark., was the only driver to break the 16-second mark during Friday’s UMP DIRTcar Summernationals qualifying at Paducah International Raceway, giving the Hall of Famer fast time honors for the 3/8-mile oval’s $10,000-to-win Chris Smith Memorial.

Moyer, who mastered the high-banked track’s slick conditions with a lap of 15.766 seconds, will start from the pole of one of four 10-lap heat races coming up. Other heat race polesitters after group qualifying: Jack Sullivan of Greenbrier, Ark.; Tyler Reddick of Corning, Calif.; and Bobby Pierce of Oakwood, Ill.

Following a sweep of the tour’s Tennessee doubleheader at Clarksville Speedway and Clayhill Motorsports, Brandon Sheppard of New Berlin, Ill., leads the series standings by 122 points. Bobby Pierce of Oakwood, Ill., and Ryan Unzicker of El Paso, Ill., are tied for second with Shannon Babb (-139) of Moweaqua, Ill., and Randy Korte (-210) of Highland, Ill., rounding out the top five. ... Former series champion Don O’Neal of Martinsville, Ind., is making his first appearance on this year’s tour, driving he No. 1 Moring Motorsports MasterSbilt. ... Scott James of Lawrenceburg, Ind., is entered in the Warrior Race Cars house car, making his second appearance on this year’s tour. James had a disappointing outing in the tour opener at Brownstown (Ind.) Speedway. ... Paducah has hosted a Summernationals event every year since 1996. Billy Moyer of Batesville, Ark., leads all drivers with three victories in the event, while Shannon Babb and Don O’Neal are among the two-time race winners. ... Three No. 81 machines from Riggs Motorsports cars will compete in tonight’s event with Kevin Cole of Christopher, Ill., joining Randy Korte and Jason Riggs in the team’s lineup. ... Dillon Wood, the New Smyrna Beach, Fla., driver who made his Summernationals debut Wednesday at Clarksville, is back with the series after skipping Thursday's race at Clayhill. ... Bobby Pierce has switched cars for tonight's race, choosing to run to run his car with the bigger engine.