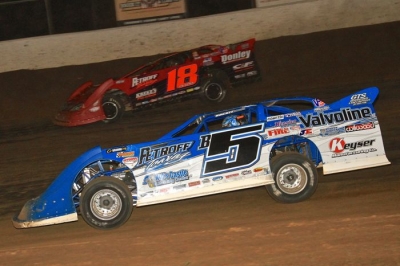 Sheppard held off Dennis Erb Jr. of Carpentersville, Ill., in the final run to the finish to earn $5,000 in winning the 3/8-mile oval’s Summernationals event for the second straight year.

“I owe this to (Babb). If it wasn’t for him braking I would’ve ran second," said Sheppard, who earned his second series victory in as many nights after also winning Wednesday’s event at Clarksville (Tenn.) Speedway. "I hate it for Shannon because he’s have some bad luck here lately. But we’ll take them however we can get it.”

Erb settled for second at the finish, followed by Ryan Unzicker of El Paso, Ill. Bobby Pierce of Oakwood, Ill., was fourth with Jack Sullivan of Greenbrier, Ark., rounding out the top five in a race slowed by two cautions. Babb was 15th in the final rundown after leading 20 laps.

Taking the lead on the race’s initial start, the pole-starting Sheppard cruised through the race’s opening laps, building a half-straightaway advantage by the time he reached the tail of the field just before the 10-lap mark. But the gap was quickly erased when slower cars battling side by side blocked Sheppard’s path.

Second-running Erb was the first to catch Sheppard, but his bid to take the lead was hampered when a lapped car slid in front of him entering turn one on lap 13. That let Babb and Unzicker race by as they set their sights on Sheppard.

Babb caught the high-running Sheppard in just a couple of laps, and was looking low for the lead when Sheppard was forced high by a lapped car exiting turn four on lap 18. Babb took advantage, edging ahead at the flag stand and completing the pass entering turn one.

“That lapped traffic was really holding me up," said Sheppad. "I think our cars were pretty even, but I just messed around with the lapped traffic a little too long.”

The race’s first caution on lap 20 cleared the track ahead of the leaders, and the seemingly equal machines of the two leaders kept things calm at the front. With Sheppard unable to mount a challenge, Babb appeared to be headed for his second victory on this year’s tour until he pulled up lame in turn four on lap 38.

Sheppard inherited the lead for the restart and had no troubles in the dash to the finish. He won by nearly a half-straightaway in earning the seventh Summernationals victory of his career.

With its two-race Tennessee swing wrapped up, the Summernationals tour moves to Paducah (Ky.) International Raceway on Friday for the first of three straight $10,000-to-win events. Federated Raceway at I-55 in Pevely, Mo., hosts Saturday's race with Sunday's visit to Lincoln (Ill.) Speedway wrapping up a stretch of five races in five days for the series.

Notes: Sheppard’s Rocket Chassis is powered by a Mullins Racing Engine with sponsorship from Valvoline, Petroff Towing, Kid’s Castle, Midwest Demolition and Keyser Manufacturing. ... The race's first caution appeared when Chris Shelton spun with 20 laps complete, and Babb caused the second caution when he slowed with 37 laps down. ... Sheppard’s other victories on the tour came at Spoon River Speedway, Belle-Clair Speedway and Clarksville. ... Clayhill is the first track where Sheppard has two-career Summernationals victories. ... Third-starting Jason Riggs was never a factor in the main event after winning his heat race. ... Wendell Wallace and Walker Arthur were among the notable drivers missing the main event lineup.

Looking to win Clayhill's Summernationals event for the second straight year, series points leader Brandon Sheppard will lead the field to green in tonight's 40-lap main event. Sheppard drew the pole in a redraw among heat race winners. Dennis Erb Jr. will join Sheppard on the front row with Jason Riggs starting third. ... Tim Lance will use a Summernationals series provisional to start tonight's main event from the 19th spot, while Chris Shelton will use a UMP provisional to start 20th thanks to the UMP points provisional. Thomas Dacus will start 21st with the track provisional while Todd Frank will round out the 22-car starting field with the second series provisional. ... The modified feature finished just after 10 p.m. The Super Late Model feature is coming up after a brief break for track maintenance.

Polesitter Randy Korte cruised in the 12-lap C-main, leading every lap on his way to winning by nearly a straightaway. Dustin Griffin was second at the finish, while Jason McBride held off Caleb Ashby to claim the final transfer spot. Wendell Wallace challenged McBride early for the third spot, but he spun midway through to bring out the race's only caution.

Polesitter Brandon Sheppard cruised in the third and final heat, winning the caution-free race by more than a straightaway over fellow front-row starter Jack Sullivan. Terry English challenged Sullivan for second early in the race but faded late in settling for third while Kent Robinson and Billy Moyer finished fourth and fifth respectively to also earn transfer finishes.

Second-starting Dennis Erb Jr. got the lead on the start of the second 10-lap heat race and turned back a late challenge from polesitter Ryan Unzicker in leading every lap of the caution-free race. Erb got sideways through turns three and four on lap eight, but corrected in time to maintain the lead and hold off Unzicker, who settled for a close second. Tyler Reddick was third with Eric Cooley and Kevin Weaver also transferring into the main event.

Jason Riggs got the jump on polesitter Shannon Babb and survived Babb's constant pressure in leading every lap of the caution-free 10-lapper. Babb looked under Riggs multiple times throughout the race, but couldn't complete the pass. He faded a bit in the closing laps in holding off Bobby Pierce for the runner-up finish. Pierce settled for third with Tanner English and Timothy Culp rounding out the top five in race that transferred five drivers to the main event.

Looking for his second victory on this year’s tour, Babb will start from the pole of one of three heat races coming up. Ryan Unzicker of El Paso, Ill., and series points leader Brandon Sheppard of New Berlin, Ill., will lead the other two heats two green.

After claiming his third victory on this year’s tour Wednesday night at Clarksville (Tenn.) Speedway, Brandon Sheppard of New Berlin, Ill., has stretched his points lead to 100 points over three-time champ Shannon Babb of Moweaqua, Ill. Bobby Pierce (-107) of Oakwood, Ill., is third followed by Ryan Unzicker (-112) of El Paso, Ill., and Randy Korte (-179) of Highland, Ill. ... Tonight’s race and Wednesday’s race at Clarksville are the tour’s only events in Tennessee. ... The two races were the first two events in a stretch of five races in five nights for the tour. The stretch concludes with three consecutive $10,000-to-win races at Paducah (Ky.) International Raceway, Federated Speedway at I-55 in Pevely, Mo., and Lincoln (Ill.) Speedway. ... Brandon Sheppard is the defending race winner. ... Winningest tour driver Billy Moyer of Batesville, Ark., is back on the tour tonight with plans to also run at Paducah and I-55. Moyer, who won Clayhill’s Summernationals event in 2009 and 2010, entered the tour’s event at Tri-City Speedway on June 21 but scratched from his fifth-starting spot after before the main event asthma attack. ... Scott Riggs of Harrisburg, Ill., is competing for the first time in two years in a third No. 81 entry for Riggs Motorsports. ... Eric Cooley of Fulton, Miss., is making his first Summernationals appearance. ... Kent Robinson of Bloomington, Ind., is making first appearance on this year’s tour with plans to also race at Paducah and I-55. ... Clayhill is hosting the Summernationals for the fifth time; it’s hosted the tour every year since 2009.