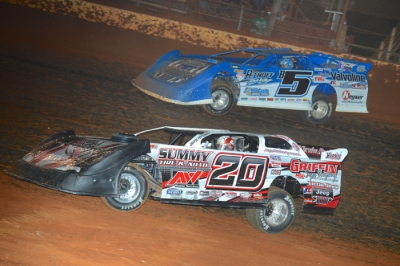 Brandon Sheppard (5) uses the high side to get by Dustin Griffin at Clarksville. (d52photos.com)

CLARKSVILLE, Tenn. (June 26) — If there was one track were Brandon Sheppard would be expected to misstep in his quest for his first UMP DIRTcar Summernationals championship, it would most likely be Clarksville Speedway.

But Sheppard not only avoided any trouble at the quarter-mile Tennessee oval during Wednesday night’s Summernationals feature; he also padded his points lead in the chase for the tour’s $25,000 title. | Complete Summernationals coverage

Winning at a track where he has traditionally struggled, Sheppard of New Berlin, Ill., drove around Dustin Griffin of Camp Point, Ill., on lap 27 of Wednesday’s Summernationals feature at Clarksville and led the remainder of the 40-lap race for his third victory on the month-long tour.

“This is probably my favorite Summernationals win yet,” said Sheppard, who claimed the sixth Summernationals victory of his career and his first at Clarksville. "We’ve been coming here for a lot of years and struggled here. This Rocket Chassis has been good to us for the whole tour and it was again tonight.”

Sheppard pulled away as the leaders raced through heavy traffic during the closing laps of the caution-free race and won by nearly a straightaway in earning $5,000 in the ninth leg of the 31-race tour.

Griffin led the first 26 laps of the race, but had to settle for second at the finish. He was followed by Ryan Unzicker of El Paso, Ill., who topped Wendell Wallace of Batesville, Ark., in a back-and-forth battle for third while Bobby Pierce of Oakwood, Ill., rounded out the race’s top five finishers.

In his previous two victories on this year’s tour, Sheppard led every lap of both race in mostly cruising to both wins. Griffin made him work a bit harder to get to victory lane at Clarksville.

Getting the jump over Sheppard on the race’s initial start, Griffin opened up a slight lead through the race’s opening laps as he and Sheppard pulled away from the field. Sheppard began to close the gap just after the 10-lap mark and was looking under the leader by lap 15.

Sheppard made multiple bids to get under Griffin in the next 10 laps, nearly taking the lead one lap 22. But each of Sheppard’s low-side bids came up short as Griffin kept his car glued to the bottom of the red-clay racing surface.

Sheppard moved to the high side on lap 25, and was nearly even with Griffin when the two leaders completed lap 26. He completed the pass going into turn three on the next lap and never looked back as he pulled away through the final race’s 13 laps.

“The bottom was working for me, and I thought he was gonna slip up. He just started hugging that bottom better and better and I knew that I had to try something. I just went for it. I kinda rolled up alongside him and it kept working and kept working, so I just stuck with it and got it done.”

Griffin, a first-year competitor on the grueling month-long series, was denied his first series victory, but notched his first top-five finish in claiming the runner-up finish.

“Early on, that middle grove had just a little bit of moisture in it. While that was there we were really good,” said Griffin, whose previous best Summernationals finish was a sixth-place effort June 23 at I-96 Speedway. “It started to go away and Brandon showed me his nose. I got to the bottom and he could just roll that thing better once it slicked off in the middle.”

The tour stays in the Volunteer State for one more day with another $5,000-to-win event at Clayhill Motorsports Park in Atwood, Tenn., on Thursday.

Notes: Sheppard’s Rocket Chassis is powered by a Mullins Racing Engine with sponsorship from Valvoline, Petroff Towing, Kid’s Castle, Midwest Demolition and Keyser Manufacturing. ... Sheppard’s sixth-career Summernationals victory moves him into a tie with Jimmy Mars of Menomonie, Wis., for 20th on the tour’s all-time wins list. ... In nine Summernationals races, Sheppard has finished among the top five in seven races and among the top 10 in eight races. ... Fast qualifier Kevin Weaver of Gibson City, Ill., dropped out from the third spot on lap 19. ... Both the Late Model and UMP Modified features ran caution free, allowing the program to finish just before storms moved over the speedway. ... Jeff Walston won the UMP Crate Speedweek event.

Points leader Brandon Sheppard will start from the pole of the 40-lap main event after a redraw among heat race winners. Dustin Griffin, a series rookie looking for his first top-five finish, will start from the outside pole with Charles Zimmerman and Randy Korte sharing the second row. ... Shannon Babb, Jason McBride, Caleb Ashby and Tim Lance are the race's provisional starters. ... The program is being rushed along in hopes of beating approaching weather — although the Super Late Model feature remains last on the program's schedule. ... Korte has been in a backup car since his primary car suffered engines woes in hot laps.

Riley Hickman outdueled Carnell Parker in a side-by-side battle through the first two laps of the B-main and pulled away through the remaining distance of the 12-lapper. Parker held off Jason McBride to finish second and claim the race's other feature transfer.

Brandon Sheppard powered to the lead on the start and led every lap of the fourth and final heat. After opening a comfortable lead early in the race, Sheppard had to hold off heavy pressure from Bobby Pierce to claim the victory. Pierce, advancing to second when Terry English and Dennis Erb Jr. tangled midway through the race, looked under Sheppard multiple times in the closing laps, but couldn't find a way around in settling for second. Clayton Miller was third, while Erb rallied back from the tail of the field to finish fourth. The was a bit of a delay under the lap-seven caution when English, apparently unhappy with having to go to the rear of the field, parked his car directly in front of the flagstand in the center of the front straightaway. After five caution laps, both English and Erb were put to the back for the restart. Shannon Babb retired from the race early.

Polesitter Randy Korte got the jump on Jack Sullivan on the start and led every lap of the caution-free 10-lapper. Ryan Unzicker turned back early pressure from Tyler Reddick in claiming the runner-up spot with Reddick third and Sullivan fourth. The first attempt to start the race was waved off. That cost Sullivan, who filed into to second on the first start but dropped to fourth on the restart.

Charles Zimmer grabbed the lead on the start of the second 10-lapper and led every lap in winning with a comfortable margin. Timothy Culp took advantage of a first-lap scramble to move from fourth to second and held off constant pressure from Wendell Wallace to claim the runner-up spot. Wallace was third, while polesitter Dillon Wood got the final transfer spot after quickly fading to fourth on the opening lap. The only caution waved with one lap complete when Chris Shelton slowed in turn three.

Second-starting Dustin Griffin got the jump on polesitter Kevin Weaver and led every lap of the first 10-lap heat race. Weaver challenged Griffin through the race's early laps, but faded late and had to hold off Justin Rattliff for the runner-up spot. Behind Rattliff, Walker Arthur grabbed the fourth and final transfer spot. The race was slowed with two laps complete when Carnell Parker and Mitchell Lingauer tangled in turn four.

Weaver will start from the pole of one of four heat races coming up at the quarter-mile oval as he looks for his second victory on this year’s 31-race tour. Other heat race polesitters unofficially after group qualifying: Dillon Wood of New Smyrna Beach, Fla.; Randy Korte of Highland, Ill.; and Terry English of Benton, Ky.

With two victories on the tour Brandon Sheppard of New Berlin, Ill., leads the series standings with 535 points. Three-time series champion Shannon Babb of Moweaqua, Ill., closed the gap a bit after claiming his first win on this year’s tour in Sunday’s race at I-96 Speedway in Lake Odessa, Mich. Bobby Pierce (448) of Oakwood, Ill., is third followed by Ryan Unzicker (433) of El Paso, Ill., and Jason McBride (385) of Carbondale, Ill. ... Clarksville’s event kicks off a stretch of five races in five days for the tour. Action moves to nearby Clayhill Motorsports Park for the tour’s only other Tennessee date on Thursday followed by visits to Paducah (Ky.) International Raceway, Federated Raceway at I-55 in Pevely, Mo., and Lincoln (Ill.) Speedway. ... Dennis Erb Jr. of Carpentersville, Ill., is back with the tour for the first time since winning the series opener June 12 at Brownstown (Ind.) Speedway. Erb, a three-time series champion is looking to win for the second straight year at Clarksville. ... Still on the tour, Tyler Reddick of Corning, Calif., is making his first appearance at Clarksville in a Late Model. He visited in a mini-sprint years ago. ... After making just one feature in five appearances on this year’s tour, Chris Shelton of Paducah, Ky., is hoping visits to his home tracks this week will help turn around his luck on the series. Shelton, who plans to enter the tour’s races through I-55, won Clarksville’s most recent weekly event on June 23. ... After a pair of disappointing performances in Steve Lampey’s No. 33 machine at Belle-Clair and Tri-City, Wendell Wallace of Batesville, Ark., is back his familiar No. 6m machine for a four-race stint on the tour. Wallace won Clarksville’s Summernationals event in 2012. ... Timothy Culp, the Louisiana native who now races out of Prattville, Ark., is making his Summernationals and Clarksville debuts. ... Dillon Wood of New Smyrna Beach, Fla., is making his first Summernationals appearances. He made the late decision to enter the event after deciding to skip the Firecracker 100 at Lernerville Speedway in Sarver, Pa., due to weather concerns. ... Tanner English of Benton, Ky., is fielding the No. 2 machine normally driven by Allen Murray at Clarksville and Clayhill. He’ll drive his own No. 96 machine beginning at Paducah as he hopes to run through July 6’s event at Highland (Ill.) Speedway. ... Walker Arthur of Forest, Va., won a MARS Series event at Clarksville in March. ... Riley Hickman of Ooltewah, Tenn., is making his first Summernationals appearance. Hickman, the reigning Southern Regional Racing Series champion and current Southern All Stars Series points leader, plans to race in Thursday's SRRS event at Duck River Speedway, but hopes to region the Summernationals Friday at Paducah. ... Clarksville first appeared on the series schedule in 1998 and has hosted a series race every year since.