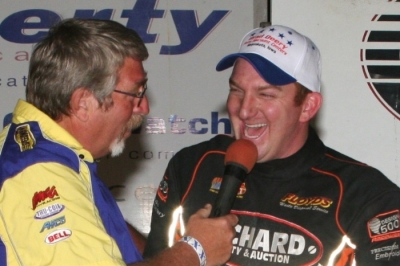 Brian Harris hopes to make Deery Brothers Summer Series history next Tuesday, at a track where he has very little history himself.

Harris runs for his record fifth straight IMCA Late Model tour victory at Independence Motor Speedway on July 2. Other than an Indee Open victory in August 2007, the Davenport driver doesn’t have a lot of success to build on there.

He’s qualified for 48 features over the course of his Deery Series career — winning nine of them — but has yet to make the show at Indee.

“I’ve been there five or six times for Deery races but I’m a non-qualifier at Independence,” said the series point leader, who would be able to use a provisional to make the field if he doesn’t qualify through his heat or consolation. “We will research the track. We’ll watch videos from there on YouTube and talk to people who race at Independence weekly.”

The 25 Deery Series events held at Independence since 1987 have drawn an average of 37 entries. Hometown hotshoe Curt Martin is a six-time winner there while Jeff Aikey of Cedar Falls has won four features, including the 2011 and 2012 races.

Along with the series regulars, Harris knows he’ll have his hands full with the weekly regulars: Independence boasts an average of 22 Late Models for its Saturday night shows.

“I know they have a lot of good drivers at Independence,” Harris said, adding Tyler Bruening of Decorah, now 14th in the Deery standings, to the conversation. “If I’m fortunate enough to win and break the record, that’s great. If I can’t win I want to stay consistent, hopefully in the top five, and maintain our point lead.”

After finishing third in each of the first three series races, Harris won on May 21 at Farley Speedway, June 6 at Hamilton County Speedway and June 11 at Cedar County Raceway.He matched the record set by Gary Webb of Blue Grass in 1994 and equaled by Rob Toland of Colona, Ill., in 1994 by taking the June 18 checkers at West Liberty Raceway.

“I already feel fortunate and appreciative of everything we’ve accomplished. Not every season starts this well,” said Harris, quick to share credit with car owner Lynn Richard, crew chief Scott Ward and chief mechanic Willie Guengerich, along with the rest of Team 15. “I can hop in the car and drive, give feedback and we make adjustments. That’s where a lot of our success comes from.”

“IMCA is providing a really competitive series and we’re putting on good shows,” he added. “Close racing really helps the sport. It makes me feel good when I hear people talk about how exciting a Deery Series race was.”

Pit gates and the grandstand at Independence open at 5 p.m. for the eighth of 17 series events this season. Hot laps are at 6:45 p.m. with racing to follow. The Deery feature pays $3,000 to win and a minimum of $300 to start.

Grandstand admission is $15 for adults and $12 for seniors ages 62 and over and students ages 12-17. Kids 11 and under get in free when accompanying a paying adult. Pit passes are $30.

“If I’m fortunate enough to win and break the record, that’s great. If I can’t win I want to stay consistent, hopefully in the top five, and maintain our point lead.”