No. 2 Lanigan edges close to Richards in poll 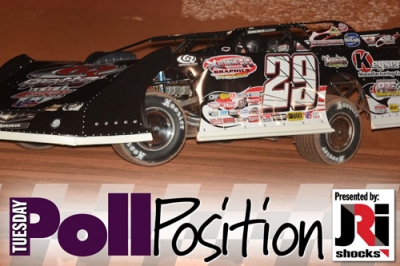 Two straight World of Outlaws Late Model Series victories for Darrell Lanigan of Union, Ky., has tightened up the battle for No. 1 in DirtonDirt.com’s Top 25 power rankings presented by JRi Shocks.

The second-ranked Lanigan, who swept the tour’s two-race swing through Canada, pulled within 10 points in the polling of top-ranked Josh Richards of Shinnston, W.Va., who has held the No. 1 spot in all but one regular-season poll.

Richards stayed on top by the virtue of nine first-place votes, but Lanigan received six first-place votes in moving up one spot. Lucas Oil Late Model Dirt Series points leader Jimmy Owens of Newport, Tenn., who dropped to No. 3 from No. 2, and Dennis Erb Jr. of Carpentersville, Ill., earned three first-place votes apiece.

The driver making the biggest jump in the poll was Chris Madden of Gray Court, S.C., who extended a personal three-race winning streak with a Lucas Oil Series victory at his home-state Cherokee Speedway. He’s up to No. 19 in the rankings after rising four spots.

The Nos. 23-25 drivers were poll newcomers with 23rd-ranked Brandon Sheppard of New Berlin, Ill., the UMP DIRTcar Summernationals points leader, joining the poll for the first time. Back in the rankings were No. 24 Earl Pearson Jr. of Jacksonville, Fla., Saturday’s Lucas Oil winner at Wythe Raceway in Rural Retreat, Va., and No. 25 Shannon Babb of Moweaqua, Ill., Sunday’s Summernationals winner at I-96 Speedway in Lake Odessa, Mich.

Comment: Not quite in the mix during WoO’s Northeast swing, manages to steady the ship with pair of fifth-place runs. Series points: 2nd (World of Outlaws). Last week's ranking: 4th (-1)

Comment: Elects to end full-time run on Lucas Oil circuit after more than four seasons; he’ll be back for richest races, no doubt. Series points: None. Last week's ranking: 7th (-2)

Comment: Mechanical failures cost him strong Lucas Oil finishes, including knocking him out of the lead at Wythe. Series points: None. Last week’s ranking: 12th (nc)

Comment: Extends personal win streak to three with Lucas Oil victory at Cherokee, his first on the series since 2009. Series points: None. Last week’s ranking: 23rd (+4)

Comment: First Summernationals triumph pays $10,000 at Tri-City, but he’s back to earth with 10th at Fairbury. Series points: None. Last week’s ranking: 20th (+1)