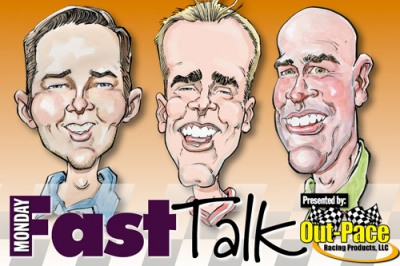 With two-time champ Josh Richards returning to the tour this season, everyone was anticipating a showdown between he and Darrell Lanigan — especially after some tension at Florida Speedweeks — as in a race to be the first three-time series champion in the tour’s modern era.

Richards got off to a great start, and he’s leading the series points, but he’s got a single victory in the last four months and finished a pedestrian 10th last night in Cornwall, Ontario. Meanwhile Shane Clanton is lurking just 22 points back and Lanigan is on a two-race winning streak and owns a series-best six victories. Nearing mid-season, it’s a pretty compelling battle up front, isn’t it?

Joshua Joiner: Richards may have gotten ahead early, but I think there's no doubt this thing will come down to Charlotte with another great points battle right through the World Finals weekend. Lanigan is starting to get hot, and Clanton's high level of performance this season will definitely keep him in it. Like I said, I definitely see it coming right down to the end of the year.

Michael Rigsby: It's a great battle up front, no doubt, but I still think, at the end of the day, Josh is clearly the favorite. I know that sounds crazy to say with as well as Darrell is running right now, but even after all of that, Josh is still up 22 points as we get ready to head into Lernerville. I would love — love — to see a three-way, all-out, all-the-way-to-Charlotte battle. I think it would be good for the series and good for the sport. Vegas money is still on Josh, and I wouldn't be surprised to see him rattle off a bunch of wins soon. But let's have a tight battle. It’ll be fun.

TT: We usually hold predictions for the end, but let’s jump in now. Who do you all like heading into the three-race weekend for Lernerville Speedway's Firecracker 100 presented by GottaRace.com? And are there any storylines for fans to watch at the Sarver, Pa., oval?

MR: I'll take Clanton, McCreadie, Richards as my three winners for the weekend. As far as storylines (shameless plug coming), let's not forget for the first time ever the Firecracker will be available via live pay-per-view at DirtonDirt.com! You can order your package by clicking here. This event has a really good "vibe" to it that you don't get a lot of places, something first-time Lernerville visitors always see.

JJ: I like Lanigan. He has come so close to winning at Lernerville before and with the momentum he picked up this weekend, I think he's definitely going to be one of the contenders at the Firecracker. When it comes to Lernerville, I always like watching to see how the local and regional drivers fair against the national invaders. When some of those guys run well — like Dan Stone winning one of last year's prelims nights — it definitely spices things up a bit.

TT: With the Lucas Oil Series, perhaps the biggest news was that two-time champion Scott Bloomquist elected to end his full-time run on the series after more than four seasons. Reviewing Bloomquist career regarding his stints on tours, that’s probably on the long side, and not a shocker considering he’s seventh in points, has a successful chassis company and at 49 is nearing the end of his driving career. What’s your reaction?

MR: Honestly, anything he does gets so much attention, but at the end of the day, it's not as "shocking" as some may think. For all the reasons you listed Todd, you could sort of feel Scott starting to wind down. He's always been a guy that likes to focus on big races, and roll into events that pay a whole bunch to win ... ready, sharp and focused. I think he's always felt that when you're running a series, you lose a little bit of that edge. Overall I don't see it as really a monster deal one way or another. Lucas is a great series, they'll continue to roll on, and will showcase other drivers, and more than likely some new ones.

JJ: No surprise at all. It's no secret that Bloomquist struggled on the Lucas tour, and with him that far back in points, it was really only a matter of time. And with a $100,000 Dream victory, I imagine he can afford to take a few races off instead of racing nearly every weekend.

TT: Lucas Oil’s three-race weekend saw Dennis Erb Jr. win in Swainsboro, Ga., Chris Madden win in Gaffney, S.C., and Earl Pearson Jr. edge John Blankenship near Wytheville, Va. Notice none of those names are Owens, O’Neal, Bloomquist and Francis, the series quartet who won 30 of 43 races last season. This year, those drivers have just six victories in 18 races — four belonging to Owens, the series points leader. With Bloomquist running fewer races, and with Erb and Blankenship stepping up this year, the series is starting to have a bit of a different look, isn’t it?

MR: It really is, and I really like it. I think we all recognize how great Scott Bloomquist and Jimmy Owens are (and Don O’Neal), but they have won so many races it was hard to break that seal they had developed. But now you're starting to see a shakeup that makes each week on the tour more of a surprise. I think the series will find, and fans will find that to be a good thing.

JJ: It's looking much different, which I think is great. No offense to Owens, O'Neal, Bloomquist and Francis, but it's nice to mix things up, and seeing guys like Blankenship and Erb winning races and doing well in the points chase is definitely a nice mixup. It's difficult to see Blankenship overtaking Owens in the standings. Owens is just so good at point racing, but he's definitely within striking distance. It'll be fun to watch to see how it shakes out the second half of the season.

TT: Let’s wrap up by diving into the Summernationals, which had some reassuring car counts in the mid-40s while hitting the heart of UMP country. Three-time champ Shannon Babb broke through for his first victory last night at Michigan’s I-96 Speedway, but he’s allowed Brandon Sheppard to jump into the points lead with Ryan Unzicker and Bobby Pierce firmly in the mix. (Kevin Weaver, who skipped I-96, might’ve been except for his broken driveshaft at Cedar Lake and the controversial call at Belle-Clair sending him to the tail). How do you see the points title shaping up a third of the way through the scheduled 31-race series?

MR: I gotta give a shoutout to our guy Sam Driggers first. Car counts and mood were back up this week as the tour really hit more of a stride, so I'm giving Sam some props! As for the points battle, I think we all knew that Shannon Babb wasn't going to go away. I wish Kevin Weaver had gone to Michigan, and had a few breaks go his way, or we could be looking at a four- or five-way battle for the lead. Let's be honest though, there is so long to go in this thing, it's impossible to handicap much.

JJ: From what I've seen, it's Brandon Sheppard's championship to lose. Other than breaking at Tri-City, Sheppard has been incredibly consistent, which was something I never would've expected from him. But he's doing just what he needs to. As long as he keeps it up, I don't see anyone catching him. That said, a slipup or two by Sheppard could definitely let those other guys back in the picture.

TT: How about some quickie Hell Tour questions for you. Biggest surprise on the tour? Best race so far? A driver you weren’t familiar that has impressed you? Predictions for the Clarksville-Clayhill-Paducah swing down South?

MR: Rapid fire, I like it. Okay I'll go. Biggest surprise: Easily Walker Arthur running more than a few events. Best race so far: I'll say the Brownstown opener where Erb came from 18th, but Fairbury would have been, had they not had a yellow midway through. Driver not familiar with? No one really fits that category, but Kevin Weaver's resurgence has definitely surprised me. Predictions for the Clarksville-Paducah swing: Hot, Hot, Hot. And Brandon Sheppard wins at least two races.

TT: Weaver has surprised me, too. Even when he's been fast in recent years, he's showing a lot more feistiness this season. I like it. I'd like to see Dustin Griffin get in there and contend for a win somewhere — maybe at Quincy or another of his more familiar tracks? Clayhill is always fun with a few of the Southern guys thrown in the mix as that track is on the "equator" that divides different groups of racers from Kentucky, west Tennessee and central Tennessee.

JJ: There have been a few surprises, but the biggest to me is Sheppard's consistency. The best race that I've seen in person was probably Fairbury, but they've all been pretty good. Bobby Dauderman winning a heat race at Belle-Clair was one of the few surprises by unfamiliar guys. As for the southern swing, expect a lot of new faces to drop in for those events, especially Clarksville and Clayhill.