From track and IMCA reports 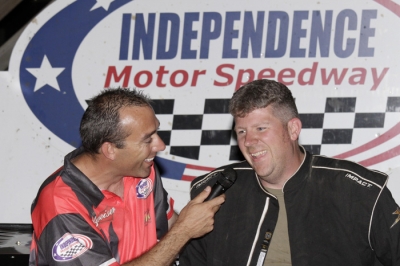 Those were the words spoken by Darren Ackerman of Readlyn, Iowa, as he fought back tears in victory lane after winning the IMCA Late Model feature Saturday night at Independence Motor Speedway. | Slideshow | Iowa weekly results

Ackerman, who was diagnosed with colon cancer in late 2011, sat out the 2012 season to fight and beat the disease. In just his seventh night back behind the wheel, Ackerman scored the 17th Late Model win of his career at Independence.

Polesitter Greg Hunter held the early advantage while Ackerman raced the low groove to the front from a fourth row starting spot. A trio of cautions over the first five laps kept the field close and allowed Ackerman to make his charge to the front by the time the third and final caution flag waved.

On the lap-five restart, Ackerman pulled away from the field while Luke Merfeld battled Hunter for second. Merfeld made his way around Hunter on lap nine while points leader Tyler Bruening was charging through the pack from a sixth-row starting spot.

Ackerman, meanwhile, pulled away to a straightaway advantage before encountering lapped traffic on the 18th circuit. By that time, Bruening fought his way into third and reeled in Merfeld to battle for second. Ackerman made his way through the backmarkers with ease to score the emotional victory. Merfeld held off Bruening to take second.

Ackerman, who has shared one Independence championship and won two others outright since 2004, was out of the driver’s seat while undergoing chemotherapy and radiation treatments, as well as two surgeries for colon cancer. He received his doctor’s approval to get back on track last November.

“Late Models are a very competitive class, especially at Independence. I’ve had a lot of fun racing with the guys there because they make you be better every week,” Ackerman said before the 2013 season. “We were pretty competitive most nights from 2007-2010. There were some mishaps in 2011.”

“I got back to watch the races there a couple times last year and enjoyed it, but I didn’t miss racing,” he continued. “There were more important things to do during that time.”

Diagnosed in November 2011, Ackerman started chemotherapy and radiation treatments beginning the following month at Covenant Cancer Center in Waterloo. He had surgery at the Mayo Clinic in Rochester, Minn., in March and again in August of 2012. Along with a positive prognosis, Ackerman got the OK to resume racing from his doctor three months later.

Co-champion at Independence in 2004 and sole titlist in 2007 and 2009, he’d made the quick transition to Late Models after just a couple seasons in the hobby stocks. Saturday’s victory was the 19th of his career overall.