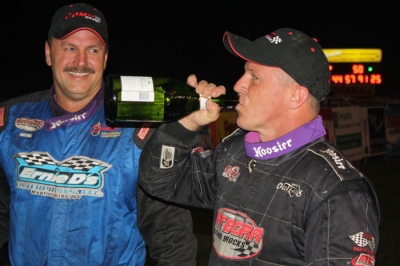 The 48-year-old Senoia, Ga., didn’t seriously challenge winner Darrell Lanigan in WoO’s second straight event in Canada, but it was a satisfying finish for a driver who entered the event without a top-five series finish.

“I’ll be honest with you, the way we’ve been running, it’s like a win,” said Smith, who gained control of second place on lap 31 when his good buddy, Tim Fuller of Watertown, N.Y., slipped over the outside berm between turns one and two while challenging Lanigan and tumbled out of the top five. “I’m trying to stay on tour (with the WoO), and a $5,000 night is a big step for me. That’s like a sponsorship compared to the $1,200 I’ve been getting (for finishing deep in the field). That’s like running five races in a row in one night. It definitely makes a big difference in where we’re going.”

In the 20 races preceding Cornwall, Smith had notched just three top-10 finishes. The driver nicknamed Cat Daddy’s previous best came with a seventh-place finish on May 11 at I-30 Speedway in Little Rock, Ark.

Smith credited his strong run at Cornwall to Lanigan, who provided setup tips that dialed in his familiar No. 44.

“I got back on Darrell’s kind of setup program tonight,” said Smith, whose lone victories this season came in regular-season events at Dixie Speedway in Woodstock, Ga., and Green Valley Speedway in Glencoe, Ala. “He helped me last year a lot, but this year we’ve been running good around home so I was trying to bring that program out here on the road. It just ain’t good in this part of the country, and I feel like I just lost my way a little bit with setup over the past three or four races.

“I got with Darrell and he helped me get everything back right tonight — so even if I could get to him, I hated to race him hard because he helped me get what I was getting. If he’d have given it to me I’d have took it, but I wasn’t gonna do no slide jobs or nothing to try and pass him.”

Smith did close in on Lanigan when the leader was in lapped traffic late in the distance, but the lap-47 caution flag effectively dashed his hopes.

“(Lanigan) had destroyed his right-rear tire racing with Fuller early in the race and I still had a good tire, so my car was a little more positive and a little more steady anywhere I wanted to go,” Smith said. “He kind of had to run a dedicated circle and keep his car pulling because he knew his tire was in bad shape, so he couldn’t move around the lapped cars as well as I could. That allowed me to gain on him, but in open track (after the caution) he was still Darrell Lanigan. He was rollin’.”