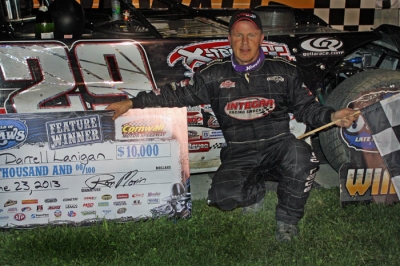 CORNWALL, Ontario (June 23) — Stick a maple leaf on Darrell Lanigan’s car and call him the King of Canada.

The defending World of Outlaws Late Model Series champion from Union, Ky., completed an undefeated trip north of the border with the national tour Sunday, outrunning the resurgent Clint Smith of Senoia, Ga., down the stretch to capture a 50-lap victory at Cornwall Motor Speedway. | Video | Smith scores best finish

“I kind of like coming up here to Canada,” said Lanigan, whose $10,650 triumph backed up his WoO score three days earlier at Brighton (Ont.) Speedway. “We always seem to run well at these tracks up here.”

Lanigan, 43, benefitted from a dose of good fortune to win his series-leading sixth race of 2013. After race-long leader Tim McCreadie of Watertown, N.Y., had his full straightaway edge over Lanigan wiped out by a lap-28 caution flag, the restart saw McCreadie slow on the homestretch due to a broken driveshaft and spin into the infield — a dramatic turn of events that handed the top spot to Lanigan for good.

The 48-year-old Smith chased Lanigan’s Rocket car for the final 19 laps, drawing within striking distance of the leader with six circuits remaining. But the race’s fifth and final caution flag, on lap 47, cleared lapped traffic from the picture and allowed Lanigan to pull away, leaving Smith to settle for a season-best runner-up finish in his Rocket mount, 1.703 seconds behind the victor.

Bub McCool of Vicksburg, Miss., started and finished third in his Victory Circle machine. He slipped back as far as fifth midway through the race before rallying to match his best WoO outing of the season.

Lanigan swept the night at the high-banked, quarter-mile oval, setting fast time and winning a heat race prior to grabbing his 47th career series victory. His perfect performance marked his second win in three starts behind the wheel of the new Rocket car he debuted at the start of the tour’s current Northeast swing.

The winningest driver in WoO history pulled off his latest conquest without having to deal with McCreadie, who appeared primed to grab his fourth WoO win of the season after he bolted into the lead from the outside pole at the start of the race. Lanigan didn’t rule out the possibility, however, that he could have challenged McCreadie if the 39-year-old hadn’t met a miserable fate on lap 28.

“I think we were running him down a little because I could see him coming to me,” said Lanigan, who started fourth. “Now whether he had problems then, I don’t know. He might have been having rear end problems then.

“Even if we got there (to McCreadie), it was gonna be hard to pass him. But our car was good, and I’d liked to have raced with him.”

“I knew Clint was back there, but I knew I had a little bit of a lead there at the end,” said Lanigan. “As long as I ran my own race I was gonna be fine.”

Smith, who started fifth, scored by far his best run of the 2013 WoO campaign; in the 20 events prior to Cornwall, he hadn’t recorded a single top-five finish.

Finishing in positions 6-10 was WoO rookie Morgan Bagley of Longview, Texas, whose sixth-place run matched his best tour finish of 2013; Chub Frank of Bear Lake, Pa., who finished in the same spot he started; Rick Eckert of York, Pa.; Fuller, who started from the pole position but never led a lap and fell from contention when he lost ground while bidding to overtake Lanigan on lap 31; and points leader Josh Richards of Shinnston, W.Va., who started eighth and was never a factor at a track where he won in 2008 and ’09.

The race’s five caution flags were caused by relatively minor incidents. John Mason of Millersburg, Ohio, and Dan Stone of Thompson, Pa., tangled in turn one on the opening lap; Larry Wight of Phoenix, N.Y., slid off the track between turns three and four on lap three; WoO rookie Eric Wells of Hazard, Ky., spun off turn three with a flat right-rear tire on lap 18; McCreadie needed wrecker service after losing the race on lap 28; and Adam Turner spun in turn four on lap 47.

The WoO continues touring the Northeast on Tuesday at Canandaigua (N.Y.) Motorsports Park.