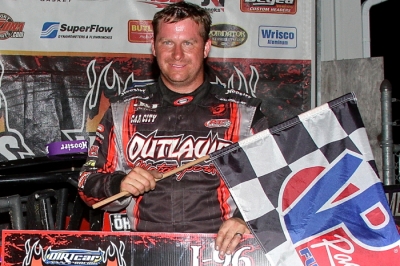 LAKE ODESSA, Mich. (June 23) — Maintaining his dominance of I-96 Speedway, Shannon Babb of Moweaqua, Ill., turned back challenges from Bobby Pierce of Oakwood, Ill., and Tyler Reddick of Corning, Calif., in leading every lap of Sunday’s UMP DIRTcar Summernationals main event for a $5,000 victory in the eighth leg of the month-long tour. | Complete Summernationals coverage

Babb, the three-time Summernationals champion earned his first victory on this year's series and won for the third straight season in the tour’s visit to I-96’s 3/8-mile oval. He held off Reddick in a two-lap dash to the finish, while Pierce was third after challenging Babb from second midway through the race. Summernationals points leader Brandon Sheppard of New Berlin, Ill., finished fourth with Rusty Schlenk of Weston, Ohio rounding out the top five.

“This place has been really good to us,” said Babb, who has now won every Summernationals race contested on I-96’s 3/8-mile oval and has another victory from when the event was held on the facility's half-mile track. “We love racing here. The fans are a lot of fun and the track was excellent.”

Babb got the jump on polesitter Ryan Unzicker of El Paso, Ill., on the race’s initial start, while the third-starting Pierce moved to second before the field completed the first lap. Pierce then set his sights on the lead, sticking with Babb through the race’s opening laps and occasionally looking low for the position.

Reddick moved from sixth to fourth on the race’s opening lap and overtook Unzicker for third on lap six. He quickly chased down the two leaders and made it a three-car battle for the lead.

Pierce gave Babb the most trouble, mounting a mid-race charge to pull to the outside of the leader multiple times between laps 18 and 25. But Pierce faded in the final 15 laps, allowing Babb to pull away and Reddick to go by for second.

Reddick chased Babb through the closing laps but couldn’t get any closer than a few car lengths. The final caution with 38 laps complete provided Reddick an opportunity to challenge Babb, but he couldn’t keep pace in the run to the checkers.

The 40-lap race was slowed by four cautions. The first appeared with four laps complete when Herb Reich of Ann Arbor, Mich., spun at the exit of turn four, and Dusty Moore of Swanton, Ohio, spun with nine laps down to bring out the second yellow.

Dona Marcoullier of Houghton Lake, Mich., went over the banking in turn one on lap 11 to bring out the third caution, and the fourth and final caution waved when Unzicker slowed with two laps remaining.

Looking for back-to-back Summernationals victories, Ryan Unzicker will start from the pole in tonight's 40-lap main event after a redraw among heat race winners. Shannon Babb will join Unzicker on the front row as he looks to win I-96's Summernationals event for the third straight year. Bobby Pierce will start third. ... Randy Korte will use a Summernationals series provisional to make the main event, while Jeff Babcock got the UMP points provisional and track provisionals went to Pat Ehert and Herb Reich. ... The Super Late Model main event is the last of four main events on the night. The first feature started just before 9 p.m. Eastern. ... Polesitter Ryan Unzicker is confident tonight’s race will likely be won on the first lap. “It’ll be hard to pass, so it’s really all about the start,” he said. “There’s gonna be a lot of lapped traffic; maybe that creates an opportunity.” ... Starting second, Shannon Babb isn’t so sure passing will be so difficult. “You’ll be able to move around some out there,” he said. “Really, (turns) three and four has some character to it, where you can diamond it off and get under someone, especially in traffic.” ... Both drivers will do their best to keep their cars on the racetrack after having trouble in their heat races. “You get up a little to high and the car just takes off on ya,” said Babb. ... Jason McBride was taken by surprise when his car slid over the banking on the first lap of his heat race. “I drove in thinking I was just fine, but obviously I wasn’t,” he said.

Brian Ruhlman got the jump on polesitter Rich Neiser and led every lap of the C-main to earn 16th starting spot in tonight's main event. Neiser and Eric Spangler were second and third to also transfer to the feature. The race was slowed on the opening lap when Mark Andersen, Robert Harden and Rachel Carpenter tangled on the back straightaway.

Bobby Pierce got the jump on polesitter Tyler Reddick on the start of the third and final heat race and led all 10 laps. Reddick was about a half-straightaway back of Pierce in finishing second with Dustin Griffin, Steve Kester and Jacob Poel also earning feature starting spots. Pat Ehlert went over the turn-one banking on the initial start to cause a complete restart. Ehlert and Robert Harden tangled on lap six to bring out the race's only other caution.

Second-starting Ryan Unzicker survived an opening-lap trip over the turn-two banking and benefitted from a complete restart to lead every lap of the second 10-lap prelim. Brandon Sheppard and Rusty Schlenk each survived nearly going off the banking themselves in finishing second and third respectively, while Wayne Chinn finished fourth and Dusty Moore topped Brian Ruhlman for the fifth and final transfer spot. Randy Korte spun from the third position on lap two when he clipped the dirt around the inside of turn-two.

Surviving a mid-race scare when he nearly went over the banking in turn two, Shannon Babb started from the pole and led every lap of the first 10-lap heat race. Babb opened a comfortable lead through the race's opening laps, but he let third-starting Brandon Thirlby close the gap when he nearly drove off the top of the track on lap five. Thirlby looked under Babb down the back straightaway, but Babb recovered to pull back ahead in turns three and four. Thirlby settled for second, while Jason McBride and Dona Marcoullier each survived opening-lap trips over the banking to finish third and fourth, with Ryan VanderVeen grabbing the final transfer spot.

Looking for his third straight victory in I-96 Speedway’s UMP DIRTcar Summernationals event, Shannon Babb of Moweaqua, Ill., topped 28 qualifiers and lowered the track record during Sunday’s time trials with a lap of 15.228 seconds around the 3/8-mile oval.

Each heat race will transfer the top five finishers to the main event with the heat winners all redrawing for their starting spots. Three more drivers will earn feature starting spots through the C-main with four provisional starters rounding out the 22-car starting field.

With his $10,000 victory at Fairbury (Ill.) American Legion Speedway on Saturday, Ryan Unzicker of El Paso, Ill., has moved to second in the series standings, 78 points behind points leader Brandon Sheppard of New Berlin, Ill. Three-time series champion Shannon Babb (-80) of Moweaqua, Ill., is third, followed by Bobby Pierce (-82) of Oakwood, Ill., and Kevin Weaver (-119) of Gibson City, Ill. ... The program’s scheduled 4:30 start time was pushed back to 5:15 to allow for some extra track prep and to accommodate a number of late-arriving teams. ... Series regulars traveled nearly 290 miles to I-96 after competing Saturday in Fairbury, Ill. They’ll travel nearly 350 miles back to Illinois for Monday’s race at Peoria (Ill.) Speedway before a day off on Tuesday. ... The track hosted a USAC AmSoil National Sprint Car event on its half-mile oval Saturday night. ... I-96 is hosting its fifth Summernationals event. It first appeared on the schedule in 2005 before hosting the tour each year since 2010. ... Shannon Babb has won the event two years in a row. He also won in ’05, while home-state driver Jeep VanWormer, who’s not competing today, won in 2010. ... Rich Neiser of Fruitport, Mich., is fresh off his first Allstar Performance Michigan Dirt Cup victory on June 16 at I-96. He backed that up with a pair of victories Friday and Saturday at Winston Speedway and Merritt Speedway. ... Jacob Poel of Spring Lake, Mich., is entering just his second Super Late Model event. ... Poel, Jeff Babcock of Wayne, Ohio, and Dona Marcoullier of Houghton Lake, Mich., are all pulling double-duty, competing in both Late Models and modifieds. ... Rachel Carpenter, 16, of Caingsburg, Mich., is the first female to compete on the tour this season. ... A number of series regulars didn’t make the trip to I-96, including Kevin Weaver and Tim Lance of Brimfield, Ill. ... Tyler Reddick of Corning, Calif., was late getting to the track and missed hot laps.