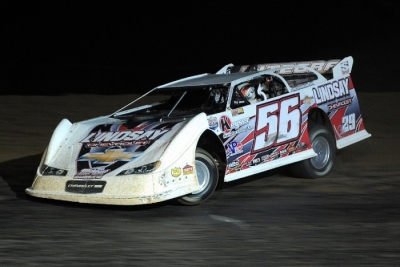 Jackson started inside the second row and overtook polesitter Jesse Stovall of Galena, Mo., on the third lap and never looked back in grabbing his fourth victory in as many weekends with three different racing organizations. He pocketed $3,000.

The track surface “cleaned off and got real racy in the feature,” said Jackson, adding his race car was nearly perfect. "Starting behind Jesse, I felt like I needed to do something he wasn't going to do. So I figured he was going to be committed to the cushion, so we just tightened up to run in the slick and it paid off. I was dreading the five-hour drive home, but I bet I make it just fine now.”

Stovall held on for second in the caution-free 30-lap feature while Brad Looney of Republic, Mo., was third. Series points leader Will Vaught of Crane, Mo., scored a fourth-place finish and division rookie Ryan Gustin of Marshalltown, Iowa, rounded out the top five. finishers.

While Jackson was in control virtually all the way, Stovall was mixing it up with fourth-row starters Looney and Vaught in a battle for second with Stovall making a daring move late to split his foes and secure the runner-up spot.

Notes: Jackson’s Rocket Chassis has a Cornett engine and sponsorship from RLB Financial, Lindsay Chevrolet and Club 29. ... Jackson has been strong since Memorial Day weekend, when he had solid runs against national competition at the Lucas Oil Late Model Dirt Series Show-Me 100. ... He won May 26 in MARS action at Monett (Mo.) Speedway then swept the June 7-8 Comp Cams Super Dirt Series weekend at Northeast Arkansas Speedway in Harrisburg. ... Will Vaught holds a 12-point lead over Terry Phillips in the series title chase and the top six drivers are separated by 37 points. ... Terry Phillips, Chase Junghans and Bryon Allison split Casey's General Stores Hard Charger honors. ... Drivers failing to make the feature lineup: Josh Most, Brian Kenkel, Lyle Shepard and Ryan Grit. ... MLRA competitors head to I-80 Speedway in Greenwood, Neb., and Adams County Speedway in Corning, Iowa, on June 28-29.