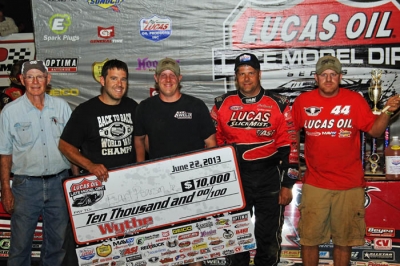 Pearson pulled away on the final lap en route to his second Lucas Oil Series victory of the season. Blankenship settled for the runner-up finish after leading 28 of the race’s 50 laps. Steve Shaver of Williamson, W.Va., was third with Jared Landers of Batesville, Ark., and Steve Francis of Ashland, Ky., rounding out the top five in a race slowed by five cautions.

“I had a second-place car,” said Pearson, who drove a Bobby Labonte Racing Longhorn Chassis to his 26th-career Lucas Oil Series victory. “I didn't think I could pass John (Blankenship). I just took a different line after the caution and found enough moisture, and I just went for it.

"My crew has worked their butts off ... It's been an up-and-down roller-coaster ride this year, but we may finally be on the right track.”

A frantic final eight-lap run was set-up when sixth-running Don O'Neal of Martinsville, Ind., slowed with a flat tire. On the restart, Blankenship was able to pull away from Pearson as the latter took a few laps to rebuild his momentum.

But Pearson did get rolling, and closed the gap to Blankenship in the final laps before sneaking by for the lead just before taking the white flag.

"I didn't even know he (Pearson) was there,” said Blankenship, who was looking to win Wythe’s Lucas Oil Series race for the second straight year. “He came out of nowhere. The car took off really well after that last caution and I just tried to hit my marks lap-after-lap, but obviously it wasn't good enough.”

Jonathan Davenport of Blairsville, Ga., held the lead for the race’s first 19 laps. But he suddenly slowed coming off turn two on lap 20. His car came to a stop in turn four and had to be pushed back to the pit area.