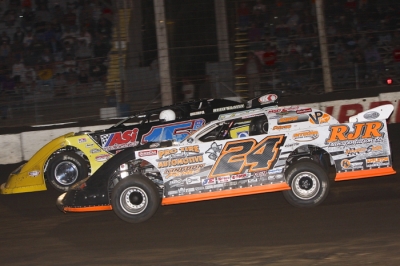 Ryan Unzicker (24) moves by Brian Birkhofer on his way to victory. (Jim DenHamer)

The fourth-starting Unzicker used the low-side of Fairbury's multi-groove track to advance to third by the halfway point of the 50-lap race. He followed Birkhofer by race-long leader Kevin Weaver of Gibson City, Ill., on lap 27 and later overtook Birkhofer’s fading machine on lap 37 before pulling away to the fifth Summernationals victory of his career.

Birkhofer settled for second, holding off a late charge from series points leader Brandon Sheppad of New Berlin, Ill. Jimmy Mars of Menomonie, Wis., finished behind Sheppard in the fourth while Weaver faded to fifth at the finish.

The race served as round seven Summernationals tour, which crisscrosses its way across the Midwest with 31 races in 39 days. The series moves to I-96 Speedway in Lake Odessa, Mich., on Sunday for a $5,000-to-win event.

Weaver commanded the race’s opening laps, building a comfortable lead during the first 10 laps. But Birkhofer tracked him down by lap 15. Birkhofer quickly peaked under Weaver once he reached him, and Weaver picked up the pace as the top two drivers opened a gap on the rest of the top five.

The race’s only caution waved for debris with 22 laps complete, erasing the slight lead built by the two leaders. Both Birkhofer and Unzicker kept pace with Weaver after the restart and shuffled Weaver back to third when he jumped the turn-four cushion on lap 27.

Birkhofer opened a slight advantage once out front, but soon had began to have trouble keeping his car in the track’s bottom groove.

Keeping his car glued to the bottom of the track surface, Unzicker took advantage of Birkhofer’s drift on the corner exits and pulled into the lead at the completion of lap 37.

Unzicker’s only challenge from there was negotiating lapped traffic. He did so with ease, opening nearly a straightaway advantage as the race ran green to the finish.

After a redraw among heat race winners, Brian Birkhofer will lead the main event to green. Kevin Weaver will join Birkhofer on the front row with Daren Friedman and Ryan Unzicker sharing the second row. ... Jason McBride and Jason Krohn will use Summernationals series provisionals to start the main event, while Scott Bull will use the track provisional and Randy Korte will use the UMP points provisional. ... There was a brief break in the program for track prep following the consolation races. Track crews spent roughly 10 minutes packing down the top of the track surface. ... Derek Chandler will drive McKay Wenger's No. 42 car in the feature after his own No. 35 had engine problems in the B-main.

Second-starting Brian Birkhofer got the jump on polesitter Bobby Pierce on the start of the fourth and final heat and led every lap in running unchallenged most of the way. Pierce briefly challenged Birkhofer on the first lap and following an early restart but faded in settling for second. Scott Schmitt was third while Shannon Babb survived an early tangle to finish fourth and also earn a feature starting spot. Second-row starters Eric Smith and Aaron Ricketts initiated a major pileup with one lap complete when they got together in turns one and two, collecting Shannon Babb and others in the process. Ricketts and Smith were the only cars sent to the tail for the restart.

Capitalizing on polesitter Derek Chandler's near spin, second-starting Ryan Unzicker moved out front midway through the third heat and led the remaining distance of the caution-free race. Unzicker and Chandler battled side by side early in the race with the low-running Chandler pulling ahead slightly at the halfway point. But he spun in turn two, allowing Unzicker to race ahead. Tyler Reddick was second with Joe Harlan and Brady Smith also transferring. Chandler drove the infield and continued running to finish fifth.

Polesitter Daren Friendman used the low line to dispatch of second-starting Chris Simpson early in the second 10-lap prelim and turned back Jimmy Mars on late restart to claim the victory. Mars settled for second while Simpson dropped to third at the finish and Tim Lance topped Scott Bull in a close finish for the fourth and final transfer spot.

Front-row starters Brian Shirley and Kevin Weaver raced side by side through the first two laps before Weaver took command on lap three and pulled away through the remainder of the caution-free 10-lapper. Shirley settled for second about a half-straightaway back with Brandon Sheppard and Frank Heckenast Jr. also transferring to the main event.

Brian Shirley of Chatham, Ill., was fastest of 47 qualifiers during Friday’s UMP DIRTcar Summernationals time trials at Fairbury American Legion Speedway, posting a lap of 12.547 seconds around the quarter-mile oval.

Shirley will start from the pole of one of four heat races coming up at Fairbury while Daren Friedman of Forrest, Ill., and Derek Chandler of Pontiac, Ill., Bobby Pierce of Oakwood, Ill., will lead the other heats to green.

Even after failing to finish Friday’s race at Tri-City Speedway, Brandon Sheppard of New Berlin, Ill., leads the series standings by 59 points over three-time champ Shannon Babb of Moweaqua, Ill. Bobby Pierce of Oakwood, Ill., is 73 points out of the lead in third with Ryan Unzicker (-88) of El Paso, Ill., and Jason McBride (-104) of Carbondale, Ill., rounding out the top five. ... Billy Moyer of Batesville, Ark., has decided to skip tonight’s race after an asthma attack forced him to scratch from Friday’s feature at Tri-City Speedway. ... Brian Shirley of Chatham, Ill., won last year’s Summernationals race at Fairbury on his way to his first series title. While he’s not following the full series this season, Shirley will be in action tonight behind the wheel of Tim Lance’s backup car. Shirley is crew chiefing for Lance on the tour this season and only racing in select events. ... Both Jimmy Mars of Menomonie, Wis., and Kevin Weaver of Gibson City, Ill., have remained in their primary cars after a tangle in Friday’s feature at Tri-City Speedway caused apparent heavy damage to both cars. ... Frank Heckenast Jr. of Frankfurt, Ill., is making his first appearance on this year’s tour. ... Fairbury was one of seven tracks on the inaugural Summernationals schedule in 1986 and has hosted a series event in all but three years since (1987-89).