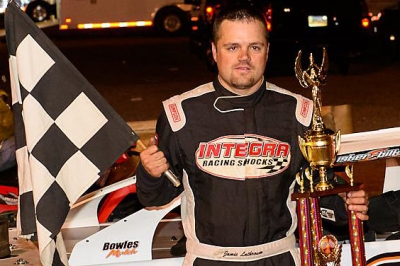 HAGERSTOWN, Md. (June 21) — Jamie Lathroum of Mechanicsville, Md., finally had things go his way at Hagerstown Speedway, getting a pole start in Saturday’s Hagerstown-Winchester Shootout. He took advantage, leading all but one lap of the 35-lap feature to earn $3,000 for his .881 second triumph over Gregg Satterlee of Rochester Mills, Pa.

“The last few times we were here, we broke a motor and broke a car,” Lathroum said. “This is a whole lot better night.”

Twenty-first-starting Jeremy Miller of Gettysburg, Pa., was third in the main event while Austin Hubbard of Seaford, Del., who led the 25th lap, was fourth. Kenny Pettyjohn of Milton, Del., rounded out the top five finishers in the 24-car field.

Lathroum took off from the outset with Gary Stuhler and then J.T. Spence running second, but Hubbard ducked under for the position following a lap-three restart.

Lathroum had no problem keeping his distance on Hubbard as they pulled away from Stuhler. Lathroum caught the rear of the field on the 16th lap as Hubbard quickly closed, but a slower car spun for a lap-18 yellow.

On the restart, Satterlee, who had advanced into third, powered past Hubbard while Lathroum edged away before another caution on lap 24.

Hubbard paid back the favor on the restart and powered past Satterlee to grab second, then edged ahead of Lathroum to lead by a half-length on the next lap. Lathroum charged back into the lead off the second turn and was again ahead more than a second when another caution appeared on the 29th lap.

Lathroum quickly escaped while it was Satterlee again retaking the runner up spot from Hubbard while behind him, Miller had arrived all the way from his 11th-row starting spot. Over the final six laps, it was all Lathroum.

“The restarts were killing us but after a few laps, I’d get a little rhythm and start getting away,” Lathroum said. “I just didn’t want to see all those restarts. I’d like to see it go green to checkered.”