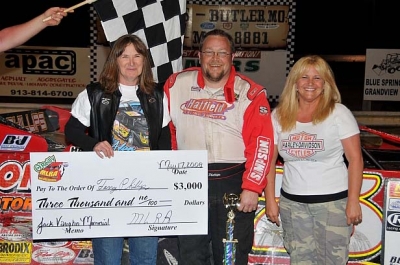 ADRIAN, Mo. (May 17) — Three-time series champion Terry Phillips of Springfield, Mo., maintained his dominance in O'Reilly Midwest LateModel Racing Association action at Adrian Speedway with a $3,000 victory in the Jack Vaughn Memorial. Phillips started on the pole and led all 40 laps in capturing his fourth consecutive series victory at the quarter-mile oval.

Denny Woodworth of Quincy, Ill., got within striking distance of Phillips amid lapped traffic a dozen laps into the race, but Phillips edged away before a lap-24 caution flag. Woodworth had his hands full with John Anderson of Omaha, Neb., and later Phillips's teammate Jeremy Payne, who rallied from mid-pack into the battle for second halfway in the race's late stages. A lap-36 caution bunched the field, but Phillips pulled away for a victory over Anderson, Woodworth, Payne and Jerry Warner of La Vista, Neb.

Notes: The winning GRT Race Car has a Hatfield engine and sponsorship from Andy's Frozen Custard. ... Phillips won in the fall of 2006 at Adrian as well as two 2007 events. ... Brantlee Gotschall picked up the $1,000 Midwest Walnut Lucky Stars award. ... MLRA competitors join other series for the May 25 Alphabet Soup Classic at I-80 Speedway in Greenwood, Neb. The winner will collect $5,000.