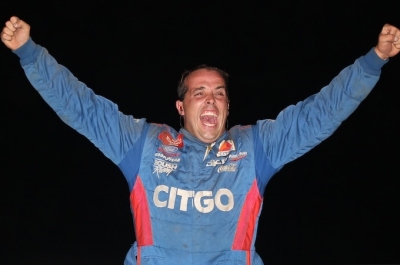 Notching his first special event victory of 2013, Stovall pocketed $3,000 for his fourth career victory with Missouri-based MLRA, leading all 30 laps to take the checkers ahead of Brad Looney of Republic, Mo.

"It's a lot harder to stand on top of that hill than it is to stand at the bottom and look up,” said Stovall, who had 16 overall victories last season. "I was getting awful frustrated. It's been along hard fought battle with (engine builder and crew member) Scott Bailey helping me.

“This is kind of a new deal here, JSR Victory Circle has been a little bit or a pain. I just can't thank (Bailey) enough for all of the hard work. It's pretty amazing to come here tonight, and be as bad as we were, and now be in victory lane.”

Tony Jackson Jr. of Lebanon, Mo., who briefly got into the frontstretch wall late while battling with Looney, was third across the line while Mark Dotson of Cameron, Mo., and Ryan Gustin of Marshalltown, Iowa, rounded out the top five. Pole-starting Travis Dickes of Madison, Neb., slipped back to a sixth-place finish in the first of two weekend race for the MLRA circuit.

Will Vaught of Crane, Mo., entered the race with a two-point lead on Terry Phillips of Springfield, Mo., in the title chase but slipped behind Phillips by two points after an 11th-place finish.

The race was slowed twice, including for Corey Zeitner’s rollover accident in turn four that drew a red flag. He wasn’t injured.