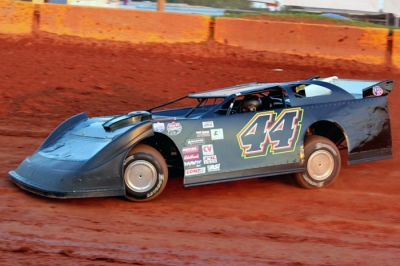 Chris gets rolling before his victory at Cherokee Speedway. (Howard Lawson)

Madden had tough competition early from Brent Dixon of Elberton, Ga., and Chris Ferguson of Mount Holly, N.C., until both drivers fell out of contention. Madden cruised through the second half of the race, topping defending race winner Steve Francis of Ashland, Ky., at the finish. Dennis Erb Jr., of Carpentersville, Ill., was third with Don O'Neal of Martinsville, Ind., and Dale McDowell of Chickamauga, Ga., rounding out the top five.

"It feels great to win here at Cherokee; it has been a while,” said Madden, who earned his third straight victory and fourth on the season overall. “The car was super tonight. We had a few problems there in traffic, but overall, after that last caution, I could drive it anywhere on the track.”

The pole-starting Madden battled with second-starting Ferguson and third-starting Dixon for the first several circuits. Dixon got by Ferguson on lap 16 and then pursued Madden for the lead.

Dixon and Ferguson were able to stay close to Madden as the race for the lead began to heat up as the trio got into lapped traffic. Dixon nearly took the lead from Madden before a caution came out as the two split a lapped car.

Madden slipped in turn two on the restart, drifting up the track to nearly allow Dixon to take the lead. Dixon held second until three laps remained when he slowed suddenly to bring out the race’s final caution. Madden cruised through the final run to the checkers to grab the victory.

Francis and Erb, who battled for fourth and fifth for most of the last half of the race, were the beneficiaries after Dixon left the race, but neither driver had anything for Madden in the final laps. Last year's Lucas Oil Series Rookie of the Year, Jonathan Davenport of Blairsville, Ga., was running third when he lost his fuel cell on lap 42.