Weaver suffers another setback at Belle-Clair 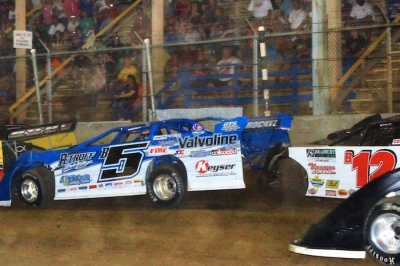 Kevin Weaver (B12) gets caught up on the frontstretch wall. (Jim DenHamer)

BELLEVILLE, Ill. (June 20) — Kevin Weaver of Gibson City, Ill., put himself in position to race for the win in Thursday’s UMP DIRTcar Summernationals feature at Belle-Clair Speedway, but a chain of events took him out of contention just when he was looking to challenge eventual race winner Brandon Sheppard of New Berlin, Ill., for the lead. | Complete Summernationals coverage

After a furious charge to second from sixth, Weaver had ran down Sheppard as the two leaders battled heavy traffic on Belle-Clair’s tiny sixth-mile oval and was just behind the leader when lapped cars running three wide directly in front of Sheppard tangled on the front straightaway. The skirmish sent Weaver’s car into the guardrail, which he rode almost to turn one before his car came free and his continued without ever stopping.

When the dust settled, the lapped car of Mick Schulte was the only car stopped on the racetrack, and the caution waved as he sat sideways in the middle of the front straightaway. Even so, race officials ruled that even though Weaver never stopped, his ride down the frontstretch wall was the cause of the caution and, much to Weaver’s dismay, sent him to the rear of the field for the restart.

“I think they just anticipated a yellow because I didn’t stop,” said Weaver, who ended up ninth in the final rundown. “I just think they thought I was in the wall and was gonna stop, but I kept going. It was a BS call.

“It could’ve easily been for the guy spun out on the racetrack. I think everybody assumed that it was for him. No one thought it was for me because I never stopped.”

The call ended what was shaping up to be a strong run for Weaver. Although his car suffered front-end damage in the accident, Weaver felt he was still fast enough to maintain his second position, if not challenge Sheppard for the victory.

“I don’t know if I could’ve got (Sheppard),” said Weaver. “I know we were close and who knows what happens in traffic. Either way, I think I would’ve been able to run second or a top five for sure.

“I really wanted to pull in. Why should I put a show on when they took the show away from me? I really wanted just to pull in, but I know if I’m gonna do these points, I needed to stay out there and suck it up.”

While he forced himself to stay on the track to try to pick a few spots in the interest of points racing, Weaver’s not 100 percent sure he’s going to continue following the entire series. Along with Thursday’s disappointment, which him from fifth to seventh in the series standings, Weaver has had a few other setbacks in the first five rounds of the 31-race series that have left him considering skipping a few of the tour’s far-flung races.

“Stuff like this, it definitely makes you question it and not want to go to the next one,” said Weaver, who also saw another strong run go for naught when he broke while leading the tour’s race at Cedar Lake Speedway in New Richmond, Wis. “They’ve got a couple far-away races coming up that don’t make any sense. It’d be easy to skip them, but for now I guess we’ll still plan to stick with it and see if we can’t turn things around.”