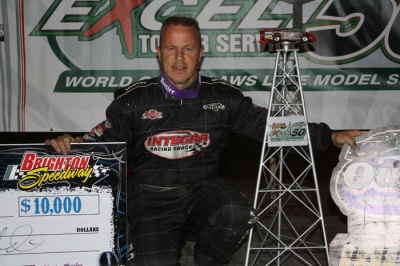 Lanigan, 43, of Union, Ky., roared off the outside pole starting spot to grab the lead from front-row mate Josh Richards of Shinnston, W.Va., at the initial green flag and never looked back. His 2-race-old Rocket Chassis machine became stronger as the race wore on, propelling him to a convincing 3.187-second margin of victory over Richards.

The $10,650 triumph in Brighton’s first-ever WoO event was Lanigan’s tour-leading fifth of the 2013 season. It came almost exactly 24 hours after he was nearly lapped while struggling to a 14th-place finish in a WoO event at Fonda (N.Y.) Speedway.

“We struggled to death last night, so man, it definitely pays off to work hard,” said Lanigan, whose streak of seven straight top-three finishes ended at Fonda. “Me, (chief mechanic) Jason (Jameson) and (crew member) Adam (Logan) put our heads together and we came up with a pretty good plan. We put some stuff that Jason learned last week on (a car) he drove and it definitely works good.

Richards, 25, stayed within a few car lengths of Lanigan during the race’s first 24 laps, which were slowed by caution flags for Gil Tegg Jr. of Rochester, N.Y. (slowed in turn three on lap six); a turn-two tangle involving seventh-place Tim Fuller of Watertown, N.Y., and the lapped Jon Rohacevich of Prattsville, N.Y. (lap 18); and Larry Wight of Phoenix, N.Y. (slid to a stop high in turn four). But over the final 26 green-flag circuits Lanigan pulled away with ease. Richards conceded that Lanigan was the class of the field.

“I knew after we made one corner that we just didn’t tighten up enough (for the feature),” said Richards, who extended his WoO points lead to 32 points over Clanton. “I’m frustrated that we started on the pole and got beat, but Darrell just had the better car and beat us tonight.

“The track had a lot more grip in it earlier and we really didn’t adjust our car enough for later. We just kind of left it alone. It still drove really good, but it just wasn’t quite right for that (slicker) condition in the feature.”

Finishing in positions 6-10 was Rick Eckert of York, Pa., who quietly inched forward from the 10th starting spot; WoO rookie Morgan Bagley of Longview, Texas, who started third and briefly nosed ahead of Richards for second on two restarts before falling from the top five late after he was forced off the track’s wall-less backstretch; Bub McCool of Vicksburg, Miss., who was celebrating his 36th birthday; Andrew Reaume of Blenheim, Ontario; and 17th-starter Billy Decker of Unadilla, N.Y.

The WoO will be idle two days before returning to action Sunday at Cornwall (Ontario) Motor Speedway. The 50-lap, $10,000-to-win event brings the tour back to the quarter-mile oval after a one-year absence caused by wet weather in 2012.