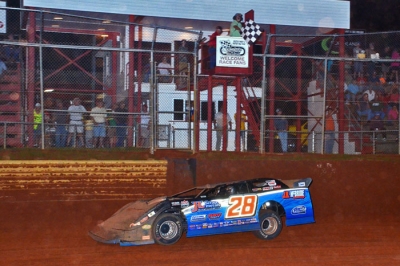 The fourth-starting Erb made a high-side move on race-long leader and outside front-row starter Earl Pearson Jr. of Jacksonville, Fla., on the 33rd of 50 laps and led the rest of the way at the half-mile oval as the tour kicked off the first event of a three-race weekend.

"It's our first time here; the car was good whether we ran low or high. I was setting him up for four or five laps and finally went into turn three and the car stuck, enabling me to finally get by Earl,” said Erb, tied with Jimmy Owens as the tour’s winningest 2013 driver. “It's been a great year for us so far, this if our fourth Lucas Oil win. We aren't worried about the points right now, we just want to win races.”

Pearson, looking for his second victory of the season, settled for second while polesitter and fast qualifier Jared Landers of Batesville, Ark., was third. Don O’Neal of Martinsville, Ind., was fourth and Steve Francis of Ashland, Ky., the Clint Bowyer Racing teammates of Landers, rounded out the top five. Casey Roberts of Toccoa, Ga., a former series winner at Swainsboro, was seventh.

"It was a really good race for the lead there early on between us, Earl, and Jared. The track was really good after they worked on it during the break.”

Pearson led 32 laps but couldn’t fight off Erb. "We really wanted to win this race,” he said. “We had a lot of friends and family here tonight.”

Landers was looking for a clean sweep of the evening's activities after setting fast time and winning his heat.

"We are knocking on the door for a win,” Landers said. “Last week we ran strong (at Magnolia Motor Speedway) in Mississippi, so we are going to move onto Cherokee tomorrow night. We've won there before, so we should feel real comfortable racing there.”

Friday’s series action at Cherokee Speedway in Gaffney, S.C., will be followed by a Saturday night event at Wythe Raceway Rural Retreat, Va. Both pay $10,000-to-win as the series runs three straight nights for the first time since Florida Speedweeks.

Notes: Erb’s Bloomquist Race Car is powered by a Kuntz & Co. engine and sponsored by JL Scrap Metal Metals, JR McBride Leasing, Petersen Aluminum and PRC. ... Erb’s previous victories came in the first seven races of the season; he won twice at East Bay Raceway Park in Gibsonton, Fla., and at Brownstown (Ind.) Speedway. ... Two-time series champion Scott Bloomquist of Mooresburg, Tenn., wasn’t among the entrants as he missed his first series points race since Aug. 30, 2008. He fell to ninth from seventh in series points and wasn’t expected to compete the remainder of the weekend. ... The 19 entries was a season-low. ... Jimmy Owens finished eighth after starting 13th to earn the Optima Batteries Hard Charger honors. ... Fifth-place finisher Steve Francis started third but dropped to fifth early after suffering front-end damage to his No. 15.