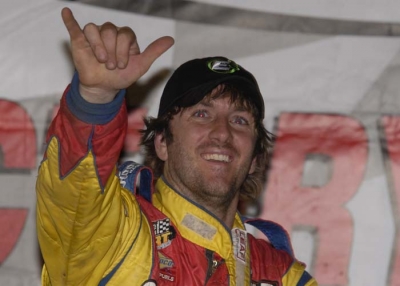 La SALLE, Ill. (May 17) — Tim McCreadie of Watertown, N.Y., outdueled Brady Smith at La Salle Speedway for his second Dirt Late Model victory of 2008 and his first on the Lucas Oil Late Model Dirt Series since 2005. McCreadie took the lead for good on lap 26 after a lengthy side-by-side battle with Smith and collected the $10,000 winner's purse at the high-banked quarter-mile oval. | Slideshow

Jason Feger of Bloomington, Ill., started from the pole and led the first 13 laps on a well-prepared surface that saw competitors racing all over the place. Feger, eyeing the biggest victory of his career, relinquished the point to McCreadie, who had started alongside him on the front row.

Smith, of Solon Springs, Wis., moved past Feger on lap 16 for second and then set his sights on McCreadie. The frontrunners used different lines around the track as Smith caught up to McCreadie and took the point on lap 23. They battled back and forth three laps until McCreadie was able to clear Smith.

The race went caution-free from lap 11 on as McCreadie pulled away from Smith over the last half of the race. Smith was able to close ever so slightly in traffic, but McCreadie had built a sizable lead and comfortably took the checkered flag. Smith was second with John Blankenship of Williamson, W.Va., coming from ninth to finish third. Rick Eckert of York, Pa., and Steve Francis of Ashland, Ky., rounded out the top five. Feger was sixth.

Notes: Winner Tim McCreadie's Rocket Chassis is sponsored by Sweeteners Plus. ... McCreadie's only previous Lucas Oil victory came Feb. 8, 2005, at East Bay Raceway Park in Gibsonton, Fla. ... Provisional starter Earl Pearson Jr. won PBM/Erson Cam Hard Charger honors for his 23rd-to-eighth run. ... Steve Casebolt finished 11th and held on to the series points lead. ... The race was slowed by three cautions and lasted 30 minutes. ... The series heads east next weekend with a May 30 event at Hilltop Speedway in Millersburg, Ohio, and a May 31 event at Florence Speedway in Union, Ky.