Sheppard rides the top to $5,000 at Belle-Clair 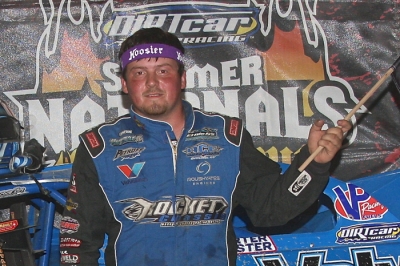 After surviving a lap-21 tangle in traffic that took out second-running Kevin Weaver of Gibson City, Ill., Sheppard was never seriously challenged in claiming a $5,000 payday during the fifth leg of the 31-race series.

“I just love to coming to Belleville. You get on the top and let her eat,” said Sheppard, who also reached victory lane at Belle-Clair during the track’s World of Outlaws Late Model Series event last season. “That’s what I love about this place. There’s always something to hold you up there.”

Ryan Unzicker of El Paso, Ill., was second at the finish, crossing the line just ahead of Michael Kloos of Trenton, Ill., while Mark Voigt of Marine, Ill., and Bobby Pierce of Oakwood, Ill., rounded out the race’s top five finishers.

Starting from the pole, Sheppard, who also claimed a $5,000 victory in Wednesday’s Summernationals event at Spoon River Speedway in Banner, Ill., got the jump on the start of Thursday’s 50-lap race and opened a comfortable lead before Weaver came into the picture.

After dropping back to sixth on the race’s opening lap, the fourth-starting Weaver quickly mounted a high-side charge toward the front. He made it three-wide to move by Kloos and second-starting Bobby Dauderman of Alhambra, Ill., into third on lap five and went by Pierce for second a lap later.

Following a lap-eight restart, Weaver chased Sheppard as the leaders quickly caught the tail of the field and entered heavy traffic by lap 15. Weaver made multiple bids for the lead before three lapped cars tangled directly in front of the two leaders on lap 21, sending cars darting in multiple directions on the front straightaway.

Sheppard avoided the scramble, but Weaver was squeezed into the guardrail. His car rode the wall to the end of the front straightaway where it came free, allowing Weaver to continue without stopping.

The yellow flag waved with Mike Schulte’s car left sitting sideways in the middle of the track, but officials charged Weaver with the caution and sent him to the tail of the field for the restart.

Weaver’s demise was a break for Sheppard, who cruised unchallenged through the remainder of the race. Timely cautions saved Sheppard from any serious traffic, and Unzicker and Kloos didn’t have enough to challenge the leader on the restarts.

Sheppard crossed the finish line nearly a full straightaway ahead in claiming the fifth Summernationals victory of his career and stretching his lead in the chase for the tour’s $25,000 championship.

“It feels really good, especially to come to two totally different tracks and win,” said Sheppard, who won on Spoon River’s 3/8-mile oval Wednesday. “Not even to win, just the consistency we’ve been having here lately is really good for us. Hopefully we can carry this on out.”

Notes: Sheppard’s Rocket Chassis is powered by a Mullins Racing Engine with sponsorship from Valvoline, Petroff Towing, Kid’s Castle, Midwest Demolition and Keyser Manufacturing. ... Sheppard entered Thursday’s race with a 47-point lead over Bobby Pierce in the series standings. ... All five of Sheppard’s Summernationals victories have come at different racetracks. ... The series moves to Tri-City Speedway in Pontoon Beach, Ill., for a $10,000-to-win event during round six of the 31-race series.

Looking for back-to-back Summernationals victories, Brandon Sheppard will lead tonight's main event to green. He drew the pole in a redraw among heat winners with Bobby Dauderman drawing the outside pole. Bobby Pierce will start third with Kevin Weaver fourth. ... The Late Model feature was moved ahead of modifieds in the running order, with the five minute call given at 9:55 p.m. ... Dauderman, a Late Model rookie, is looking to win in his first Summernationals start. ... Tyler Reddick's heat race run-in with the wall was due to his engine's loss of power. With no spare engine, Reddick is done for the night and possibly dropping off the series. ... Provisionals went to Todd Frank, Mike Schulte, Jason McBride and Shannon Babb. ... Babb's crew had to change a number of right-front suspension issues after he was involved in a heat race pileup. ... McBride's heat race spin was caused by a flat left-front tire. His crew swapped bumpers and nose bars on his No. 77 machine. ... Jesse Stovall scratched from his consolation race. His Summernationals stint is over for now.

Brian Diveley turned back a furious challenge from Mike Hammerle on his way to claiming the B-main. The high-running Diveley led every lap, and topped Hammerle in a photo finish after the low-running Hammerle rallied from a third-row starting spot. Both drivers transfer to the main event.

Polesitter Kevin Weaver came out on top of a side-by-side battle with Dewayne Kiefer through the race's first three laps and pulled away through the remaining distance of the caution-free final heat race. Kiefer held on to second at the finish, just ahead of Randy Korte, who topped a three-wide battle with Jim Moon and Mike Hammerle to finish third. Moon settled for the fourth and final transfer spot.

Bobby Dauderman turned back a late challenge from second-starting Ryan Unzicker in leading every lap from the pole of the third 10-lap prelim. Dauderman opened a few car lengths advantage early in the race, but three restarts gave Unzicker opportunities to make a bid for the lead. Unzicker pressured Dauderman hard after the final restart with just a couple laps remaining, but he couldn't find a way around in settling for second. Brent Kreke survived an early scrape to finish third with Dustin Griffin grabbing the fourth and final transfer spot. The race was briefly red-flagged with two laps complete when a pileup involving Jesse Stovall, Brent Kreke, Richie Standridge and others blocked turn four. Another caution waved with five laps complete when Jason McBride spun from a transfer spot and collected Corey Ford and Richie Standridge. McBride's car had to be towed to the pit area.

Polesitter Bobby Pierce cruised in the caution-free second heat, leading all the way in winning by more than a straightaway. Second-starting Michael Kloos challenged Pierce through the first two laps before fading through the remaining distance. He held off a late challenge from Rick Salter, who rallied from sixth to third on the low side of the track. Frankie Martin was fourth to also transfer to the main event.

Outside polesitter Brandon Sheppard got the jump on fellow front-row starter Tyler Reddick and survived a few scrapes with the guard rail in leading the 10-lap prelim flag to flag. Reddick wasn't so lucky. The right side his car slammed the wall getting into turn one on lap eight, leaving the rear of his car with heavy sheet metal damage and a flat right-rear tire. Reddick's departure gave the second spot to Mark Voigt, and he held it to the finish. Wendell Wallace survived heavy sheet metal damage to the left-rear of his car to finish third with Tim Lance grabbing the fourth and final transfer spot in a race slowed by two cautions. The first yellow flag waved with one lap complete when Shannon Babb, Dave Thornton and Chris Shelton spun in turn one. Babb retired from the race.

Reddick will start from the pole of one of four heat races coming up at the St. Louis-area dirt track. Other heat race polesitters after group qualifying: Bobby Pierce of Oakwood, Ill.; Bobby Dauderman of Alhambra, Ill.; and Kevin Weaver of Gibson City, Ill.

The qualifying session was slowed one just one occasion when hometown driver Andrew Johns spun on his second lap. Daryn Klein of Collinsville, Ill., was the only driver not to post a time; he slowed with ignition issues and pulled to the infield on his first lap.

Fresh of his $5,000 victory Wednesday at Spoon River Speedway in Banner, Ill., Brandon Sheppard of New Berlin, Ill., leads an all-Illinois top 10 in the series standings with 280 points. Bobby Pierce (233) of Oakwood has jumped Shannon Babb (231) of Moweaqua for second, while Jason McBride (216) of Carbondale and Kevin Weaver (205) of Gibson City round out the top five. ... Walker Arthur of Forest, Va., is making his first-ever Summernationals appearance tonight as he begins a trek he hopes will last through July 9 at Florence Speedway in Union, Ky. “That’s our plan if we can survive that long,” Arthur said. “It’s all about survival.” Arthur said he specifically chose Belle-Clair for his first series start because he enjoys racing on short tracks. But he allowed that he’s never seen a track “anywhere close to this short.” ... Wendell Wallace of Batesville, Ark., is making his first appearance on this year’s tour in Steve Lampley's No. 33 Barry Wright that Wallace occasional races and Tyler Reddick fielded in the Summernationals opener at Brownstown. Wallace, a three-time Summernationals winner whose most recent series victory coming July 9, 2011 at Clarksville (Tenn.) Speedway, plans to stick with the tour through Saturday’s event at Fairbury (Ill.) American Legion Speedway. ... Second-year Late Model driver Daryn Klein of Collinsville, Ill., missed last year’s Belle-Clair feature lineup in his first-ever Summernationals appearance, but he’s aiming for a top 10 tonight. He said a new MasterSbilt Race Car and a year of experience have made him much more competitive than a season ago. ... Belle-Clair is hosting its sixth Summernationals event. The St. Louis-area track has hosted the series every year since 2008. ... Jason Feger of Bloomington, Ill., won last year’s stop at Belle-Clair. He’s not competing on the series this season while serving a six-month suspension from World Racing Group events due to a tire infraction at a World of Outlaws event at Farmer City (Ill.) Raceway earlier this season. ... In visiting all new tracks on his first-ever Summernationals runs, Todd Frank of Mellen, Wis., is having to experiment with unfamiliar setups. “I’ve got bars where I’ve never had bars before and suspension where I’ve never had suspension before,” he said, noting that most Summernationals tracks are shorter than most of the tracks he runs back home. ... Mike Hammerle of St. Charles, Mo., leads the track’s Late Model standings.