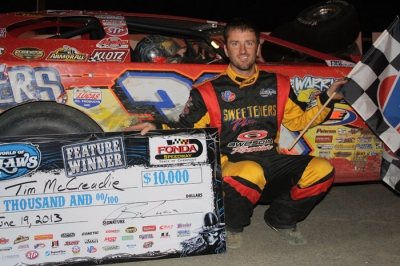 The 39-year-old big-block-turned-Dirt Late Model star dominated the caution-free event in his Sweeteners Plus Warrior car, racing off the pole position to lead from start-to-finish. He was never seriously challenged en route to his third triumph of 2013 on the national tour.

McCreadie’s $10,650 win was the third of his career at the uniquely-shaped half-mile Fonda oval, but his previous two scores came in 2003 and ’04 in big-block modified features. Wednesday night marked his first-ever start at the track in a Dirt Late Model.

Dan Stone of Thompson, Pa., started on outside the front row and chased McCreadie for the entire distance but never got close enough to mount a bid. He steered his family-owned Rocket machine under the checkered flag 0.994 behind McCreadie.

McCreadie was at his best when it counted. He shook off a frustrating, albeit effective, heat-race performance to shine in the headliner.

“We weren’t so good early,” said McCreadie, who nevertheless finished second in his heat race to make the redraw for the top six starting spots. “In the heat I felt bad, but it just made me go to work on my stuff. We made the Warrior car a lot better for the feature than what it was in the heat — and drawing the pole helped, too.”

Making a rare start with his father — legendary driver “Barefoot” Bob McCreadie, who owns four career special-event victories at Fonda — in attendance, T-Mac surged into the lead at the initial green flag of the 50-lapper and never looked back. He calmly handled several bouts with lapped traffic to keep Stone at arm’s length.

“We were running just trying to be smooth and keep the tires under the car — not wheel-spin ‘em, because when it’s slick like that you can kill your edges,” said McCreadie, who recorded his 23rd series victory.

McCreadie enjoyed a victory lane family photo with his father and younger brother Jordan and savored a triumph that was well-received by his home-state fans.

“I do really love racing in New York state,” said McCreadie, who moved back past fellow big-block modified transplant Tim Fuller of Watertown, N.Y., for fifth place in the WoO standings. “When you’re running bad it’s 10 times worse because everybody expects you to be up front, but when you run good it’s a relief as much as it is excitement.

Stone, 36, kept McCreadie in his sights throughout the race but couldn’t summon enough power to mount a major run at the top spot.

“I think we were pretty even speed-wise,” said Stone, who has two career WoO victories. “There were a couple bounces (holes) in the turns and once in a while (McCreadie would) hit ‘em wrong and he’d get held up and I’d close in, but then I’d get greedy and hit the bumps a little bit wrong (and lose ground).

“I’m not ashamed to lose to Tim in New York. He’s got a few laps around and he’s good in this (slick) condition, too.”

Decker, 48, was satisfied with a podium finish in what was his first dirt Late Model appearance of 2013.

“I think the Gypsum Wholesalers car was a little better than I was tonight,” said Decker, who has two career big-block modified wins at Fonda. “I kept missing the line in (turns) one and two. I know when I hit it I was as good as anybody, but I missed it more than I hit it.

“I need to get a little bit better, but all in all I’m tickled to death. I had a lot of fun tonight.”

Finishing in positions 6-10 was Shane Clanton of Zebulon, Ga.; Chub Frank of Bear Lake, Pa., who slipped backward at the start from his fifth starting spot; Bub McCool of Vicksburg, Miss.; Clint Smith of Senoia, Ga.; and Josh Richards of Shinnston, W.Va., who had a quiet night and saw his WoO LMS points lead shrink to 26 points over Clanton.

Former Fonda big-block modified champion Ronnie Johnson of Duanesburg, N.Y., had a respectable Dirt Late Model debut behind the wheel of Frank’s second car. He timed sixth fastest — just a tick off Frank’s clocking — and finished fourth in his heat before retiring from the feature on lap 10 and being credited with a 21st-place finish.

The WoO swing through the Northeast continues Thursday with a first-ever visit to Brighton (Ontario) Speedway for the Excel Tower Service 50.