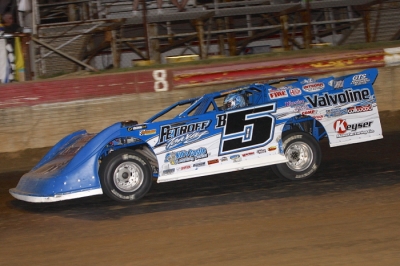 BANNER, Ill. (June 19) — Series points leader Brandon Sheppard of New Berlin, Ill., cruised to his first UMP DIRTcar Summernationals victory of the season Wednesday night at Spoon River Speedway, claiming a $5,000 victory with a flag-to-flag performance in the fourth round of the 31-race series.

The pole-starting Sheppard claimed the fourth Summernationals victory of his career in beating fourth-starting Billy Drake of Bloomington, Ill., to the finish. Second-starting Jason McBride of Carbondale, Ill., matched his career-best Summernationals finish in third with Tyler Reddick of Corning, Calif., and Bobby Pierce of Oakwood, Ill., rounding out the top five in a race contested almost entirely in the 3/8-mile track's bottom groove. | Complete Summernationals coverage

Sheppard got the jump on the start, while McBride immediately pulled into the bottom groove behind him. That opened the door for Drake to power around the high side of turns one and two on the opening lap as he moved from fourth to second. It was one of the few high-side moves of the race, as the field quickly began to lineup in the track's low groove.

Sheppard stretched out a comfortable lead in the first five laps of the race, but Drake reeled him in as the two leaders began to close on the back of the field. Drake stayed within two car lengths of Sheppard over the next 10 laps, but Sheppard never opened the door and lapped traffic didn’t come into play before the first of the race’s five cautions appeared with 15 laps complete.

That was as serious a challenge as Drake could mount, as Sheppard pulled away on each of the race’s restarts in cruising to the victory.

The lap-15 caution waved when Jesse Stovall of Galena, Mo., spun at the exit of turn two. The second yellow flag was caused by a tangle between Scott Schmitt and Jim Moon with 22 laps complete. Evan Fink brought out the third caution when he slowed to a stop on lap 31.

Major front suspension issues caused Ryan Unzicker of El Paso, Ill., to stop on the track on lap 32, bringing out the fourth caution. The fifth and final caution waved with 38 laps complete when Dustin Griffin, who ran among the top five for most of the race, tangled with Rickey Frankel in the middle of turns one and two.

Brandon Sheppard will start from the pole in the main event after a redraw among heat race winners. Jason McBride will join Sheppard on the front row with Dustin Griffin and Billy Drake sharing the second row. ... Track crews are taking a brief break to wet the track before the program moves forward with consolation races. ... McBride is glad to be starting on the front row, but he'd much rather be on the inside than the outside. "It's start to look really crumby up there, but maybe it'll be good enough for us to get a good run off of (turn) two and get out front," said McBride. ... While most drivers prefer not to see a one-laned racetrack, that's exactly what Dustin Griffin is hoping for. "I just want to get a top five. If we get can get into third or better off the start, I'd be fine if there wasn't any passing the rest of the race." ... Jesse Stovall was securely in the third spot after taking the white flag in his heat race, but he slowed on the final lap and let Rickey Frankel retake the spot from him. Stovall said he was confused with the Summernationals flagging system, which shows a green-flag on the second-to-last lap before the white and checker. "I saw that green flag and just assumed the next one was gonna be the checkers." ... Provisionals went to Pete Parker, Jim Moon, Evan Fink and Scott Schmitt.

Second-starting Dustin Griffin muscled his way by polesitter Rickey Frankel midway through the fourth and final heat and pulled away through the remaining distance. Tim Lance used the low groove to climb from fifth to second while Frankel topped Jesse Stovall in a back-and-forth battle for third. The fourth-starting Stovall climbed as high as second using the high groove early in the race, but he slid back to fourth at the finish. He'll join the top three in transferring to the main event.

Polesitter Jason McBride survived a back-and-forth battle with fourth-starting Brian Divley midway through the caution-free third heat and pulled ahead late on his way to victory. Divley rallied on the top side of the track, taking second by lap two and quickly closing the gap to McBride. Divley pulled ahead of McBride at the line on lap five, but McBride rallied back and pulled back ahead a lap later. McBride pulled to a few car-lengths advantage in leading the final laps. Divley settled for a close second, while Scott Bull topped Shannon Babb in a photo finish for third.

Polesitter Billy Drake cruised in another caution-free 10-lapper, leaving Bobby Pierce and Ryan Unzicker to battle for second. The low-running Unzicker held the spot early after Pierce slipped to third from the outside pole. But Pierce used the high side to battle back and retook the spot midway through the race. Pierce moved to the bottom and set his sights on Drake in the closing laps, but he couldn't make up any ground in taking second. Unzicker was third with Randy Korte also earning a feature starting spot.

Second-starting Brandon Sheppard got the better of polesitter Tyler Reddick in a side-by-side battle through the race’s first two laps before pulling away and leading the remainder of the caution-free 10-lapper. Pierce stayed roughly a half-straightaway behind Sheppard in taking second, while Kevin Weaver over Todd Frank late in the race for third. Frank settled for the fourth and final transfer spot.

Billy Drake of Bloomington, Ill., posted a lap of 13.972 seconds around Spoon River Speedway during Wednesday’s time trials to top 37 qualifiers during round four of the 31-race UMP DIRTcar Summernationals.

Drake, winner of the 2003 Summernationals race at Spoon River, will start from the pole of the second heat race coming up at the 3/8-mile oval. Other heat race polesitters after group qualifying: Tyler Reddick of Corning, Calif.; Dustin Griffin of Camp Point, Ill.; and Kevin Weaver of Gibson City, Ill.

Each 10-lap heat race will transfer the top four finishers to tonight’s 40-lap, $5,000-to-win main event with the heat race winners all redrawing for their starting spots.

The series has hosted three events so far with Dennis Erb Jr. of Carpentersville, Ill., winning the opener at Brownstown (Ind.) Speedway a week ago, Brian Birkhofer claiming Friday’s stop at Cedar Lake Speedway in New London, Wis., and Kevin Weaver of Gibson City, Ill., winning Sunday at Wilmot (Wis.) Speedway. ... Brandon Sheppard of New Berlin, Ill., leads the series standings with 200 points He’s followed by three-time series champion Shannon Babb (184) of Moweaqua, Ill., Bobby Pierce (173) of Oakwood, Ill., Weaver (154) and Randy Korte (151) of Highland, Ill. ... Making his first Summernationals appearance since 2008, Jesse Stovall of Galena, Mo., has joined the tour and plans to stick with the tour through Saturday’s race at Fairbury (Ill.) American Legion Speedway. He plans another three- or four-race stint on the series beginning June 26 at Clayhill Motorsports Park in Atwood, Tenn. Making his first trip to Spoon River, Stovall was surprised when he first saw the track. “It doesn’t look like any other Illinois track I’ve ever seen — just way more banking than most of them,” he said. “It looks like a pretty racey place.” ... After winning on the series for the time since 2008 in Sunday’s event at Wilmot, Kevin Weaver of Gibson City, Ill., has switched cars for tonight’s action, electing to run the three-race-old Bill West Enterprises machine he ran in the series opener at Brownstown. Weaver said he considered sticking with the Bob Pierce Race Car he was strong in at Cedar Lake and Wilmot, but he wants to keep his equipment fresh by alternating cars. “It’s hard to make all those races on one car,” he said. ... Both Weaver and Brandon Sheppard weren’t fans of the two-day break. Both drivers said they would rather have been at a race than working on their race cars in the shop. ... Todd Frank, who raced at both Cedar Lake and Wilmot after missing the opener at Brownstown, plans to run the remainder of the tour. ... Suspended former series champion Jason Feger of Bloomington, Ill., is in the pits at tonight's race as a consultant to a few competing teams. ... Continuing his rough start on the Summernationals, the generator on Tyler Reddick’s hauler broke on the way to the track. He’s plugged into neighbor Ryan Unzicker’s rig for power. ... Bobby Pierce’s first Late Model victory came at Spoon River during a Crate Late Model race in 2009. ... Jon Henry of Ada, Ohio, won last year’s Summernationals race at Spoon River. He’s not in action tonight.