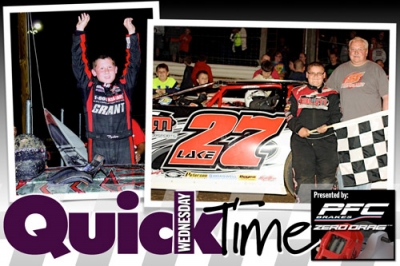 National: Mike Marlar of Winfield, Tenn., scored his first victory of the season June 15 at Magnolia Motor Speedway in Columbus, Miss., overtaking Don O’Neal in the final 10 laps of the $20,000-to-win Clash at the Mag on the Lucas Oil Late Model Dirt Series.

Weekly: Daren Friedman of Forrest, Ill., scored an Illinois sweep with victories at Farmer City Raceway and Fairbury American Legion Speedway, where he collected $2,000 in the Pappy and Bob Allen Memorial.

There was something about the mid-June racing weekend that brought out the best in young drivers as a couple of pre-teens scored their first Late Model victories.

The grandson of long-time Late Model car owner Bobby Lake had everyone buzzing in victory lane about his big moment.

“I’m pretty much speechless; words can’t really describe this,” Michael's father Kevin Lake said. “He just turned 11 when we first put him in the car. To win a main event a year later is unbelievable. He doesn’t even know what he has accomplished; I’m sure it will sink in soon.”

While Lake is certainly among the youngest to win a Late Model event, he actually wasn’t even the youngest driver to win one during the weekend. That went to Tyler Clem of Tierra Verde, Fla., who at 10 years old won a Limited Late Model feature at the track co-owned by his father, famed shock jock Bubba the Love Sponge Clem.

The young Clem spun early while trying to grab the lead, then came back through the pack to take the point on lap 13. He led the rest of the way.

My favorite television show is “The Wire,” the layered HBO drama about police, drug dealers, politicians, schoolchildren, and really everyone, in Baltimore. And one of my favorite scenes is in the last of five seasons when a key detective, McNulty, is dispatched to the FBI in Quantico, Va., so the feds can profile a serial killer he’s chasing.

The kicker is the serial killer doesn’t exist: McNulty fabricated him to spur budget-strapped City Hall to increase police overtime and man-hours for another case. So it’s no real surprise that McNulty squirms in his seat as FBI agents provide the characteristics of the would-be serial killer as a white male who is a “high-functioning alcoholic,” someone who “feels superior to those with advanced education,” and has a “deep-seated resentment to those whom he feels have impeded his progress professionally.” Of course, they’ve unknowingly profiled McNulty.

It reminds me of my days working in newspapers when co-workers, reading stories about a serial killer on the loose, joked that my long highway miles and loner-like travels — all part of being a Dirt Late Model fan — made me a suspect.

So what is the profile of a Dirt Late Model fan? I’m no FBI agent, but I’ll give it a shot:

• Loyal to a fault, vocally supportive of heroes and unafraid to develop relationships with them.

• Relentless in traveling and known to take lengthy trips, often on two-lane roads, with no apparent meaningful destination.

• Severely distrustful of meteorologists, often refusing to admit it’s raining — even when raindrops are actually falling.

• Unencumbered by fashion trends and typically the owner of a vast array of colorful, tattered T-shirts, some dating to the first Reagan administration.

• Driver of vehicles frequently covered by a dusty sheen, and the use of windshield wipers — when it’s not raining — is common when heading home.

• Skillful and clever in wringing out every single hour of vacation each summer.

Justin McNeill of Houghton Lake, Mich., dominated June 15’s feature at Merritt (Mich.) Speedway — until the final corner. That’s when he let off the gas, and pole-starting David Hilliker of Midland, Mich., slipped by in turn four for the victory.

McNeill had mistaken the white flag for the checkers, and thought the race was over. He recovered to hold on for second, but afterwards talked about the disappointment of his first victory of the season slipping away. Hilliker took the victory over McNeill, Scott Phillips, Josh Knoll and Book Brasington.

Two teams made up of series, regional and local drivers will compete to raise awareness and money for programs and research devoted to childhood cancer, according to WoO publicist Kevin Kovac. The Kick-It Cup follows the lead of the Jeff Gordon Children’s Foundation-inspired kickball games and will mark the first time Dirt Late Model drivers have participated.

“World of Outlaws STP Sprint Car Series fans and teams have really embraced the Kick-It concept and we believe the World of Outlaws Late Model Series followers will do the same,” said World Racing Group production coordinator Katie Boyer. “It’s a neat way for the fans and drivers to unwind and have some fun before hitting the track and support a great cause in the process.”

The game is scheduled for 1 p.m., Friday, June 28 on the football field in Lernerville’s camping area. Among drivers expected to participate:

Fans can make donations at www.kick-it.org/events/firecracker-100-kick-it-cup, designating their favorite drivers. Those attending the game can purchase raffle tickets to win racing-related apparel and other prizes.

June 22, 1996: Riding a hot streak, polesitter Danny Peoples of Margaret, Ala., held off a late charge from Dale Ledlow for a $5,000 victory in the sixth annual Bama 100 at Moulton (Ala.) Speedway. Peoples, who swept triple features at Talladega Short Track the previous weekend, hung on despite a slowly deflating right rear tire late in the 100-lapper.

June 20, 2008: Fighting off a late challenge from 11th-starting Jimmy Owens, Dan Schlieper of Sullivan, Wis., led all 40 laps at Cherokee Speedway in Gaffney, S.C., for his second Lucas Oil Late Model Dirt Series victory in the last three events. Schlieper earned $7,000 in front of a standing-room only crowd for the 10th annual Grassy Smith Memorial.

June 22, 2011: The Southern All Stars strip Klint Byars of Carrollton, Miss., of a victory at Whynot Motorsports Park after his tire sample failed a lab test. He was reinstated as the winner nearly two months later after additional lab tests showd the tires legal.

• The UMP DIRTcar Summernationals will go without a repeat winner at least through June 23’s stop at I-96 Speedway in Lake Odessa, Mich.

• World of Outlaws Late Model Series winners at upcoming New York and Canadian events will come from the top five in series points.