Make it four consecutive for Harris on Deery tour 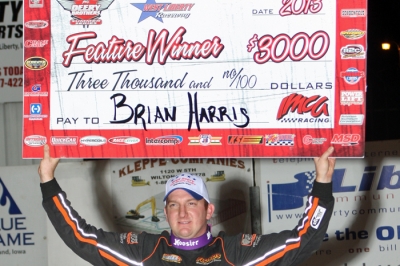 WEST LIBERTY, Iowa (June 18) — Going into Tuesday night’s Deery Brothers Summer Series event, Brian Harris said West Liberty Raceway was one of his favorite racetracks. He has even more reasons to like it now.

The 34-year-old driver from Davenport, Iowa, captured a record-tying fourth consecutive IMCA Late Model tour feature at West Liberty, going back and forth with Andy Eckrich of Oxford, Iowa, for the lead midway through the 40-lapper before settling into the front spot and running away with the $3,000 checkers. | Slideshow

Next, Harris will try to set the new record of five straight series wins when Independence Motor Speedway hosts the tour July 2.

Pole-starting Nick Marolf of Moscow, Iowa, had his sights set on being the driver to end Harris’ streak, looking strong while leading the first 12 circuits.

Eckrich pressured Marolf before enjoying a brief run at the front of his own. That’s when the 10th-starting Harris joined the mix, swapping the lead with Eckrich six times over the course of the next seven laps.

Harris was the leader when the one and only caution of the night came out on lap 24. He checked out from that point on, winning easily ahead of Eckrich.

Justin Kay of Wheatland, Iowa, completed a late-race bid for third, Ray Guss Jr. of Milan, Ill., was fourth and Marolf was fifth.

The record of wins in four consecutive Deery Series events was set by Gary Webb in 1994 and first matched by Rob Toland in 2004. Now the owner of nine career tour wins, Harris remains the point leader heading to Independence for the eighth of 17 events on the 2013 schedule.