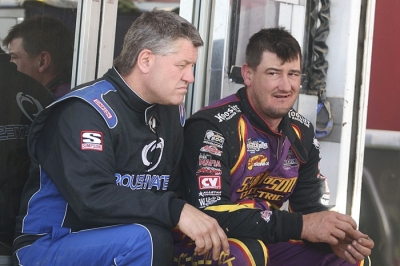 The World of Outlaws Late Model Series has never visited Brighton Speedway, but a couple of Outlaws have been to the third-mile Canadian oval. And of course, both drivers hope their 2012 appearances at Brighton will give them a leg up on their World of Outlaws rivals when the national tour makes its inaugural stop at the track Thursday, for the Excel Tower Service 50 presented by Dibbits Excavating, Campbellford Chrysler and J.J. Stewart Motors.

Chub Frank of Bear Lake, Pa., and Bub McCool of Vicksburg, Miss. — WoO traveling buddies when on the road — are the only circuit regulars who have previous experience at Brighton. They accepted an invitation from Brighton promoter Mark Rinaldi to compete in a special exhibition race last year on an off-day between WoO events north of the border, a decision that gave them an unexpected preview of the track.

The rhyming buddies, Chub & Bub, understand that it’s difficult to ever gain an advantage on the WoO’s biggest winners like Josh Richards of Shinnston, W.Va., Darrell Lanigan of Union, Ky., Shane Clanton of Zebulon, Ga., Rick Eckert of York, Pa., and Tim McCreadie of Watertown, N.Y., so they’re eager to grasp any perceived edge their prior circuits around Brighton might provide.

“I think being there last year should help us going back,” said McCool, whose run at Brighton last year came during the first racing trip to Canada he had ever made. “We’ll know a little bit about what to expect anyway. That’s a good thing considering we’ve raced at a lot of tracks for the first time since we started the Outlaw deal last year.”

In an odd quirk, Frank and Earl were the only drivers to finish last year’s dash. Frank laughed when he recalled the race.

“I don’t know what happened, but just about everybody had some mechanical issues,” said Frank, who has been a WoO stalwart since the tour was restarted in 2004 under the World Racing Group banner. “Bub, Belyea — everybody was blowing up! The track wasn’t hard on motors or anything, so I guess it was just one of those nights for everybody.”

Frank turned sufficient laps at Brighton to proclaim the place ready for an action-packed WoO event on June 20.

“I’m pretty sure it will be a good racetrack,” Frank said. “It kind of reminds me of a smaller Lernerville (Speedway in Sarver, Pa.) because it’s basically got a wall on the front straightaway and that’s it. You don’t have to worry about hitting the wall in the corners so you can race pretty much all over it.

“I think it’s going to be faster (on June 20) than when we were there last year,” he continued. “I’ve heard from Greg (Belyea) – I talk with him a lot because I put cars together for him – that they’ve put some new clay on it.”

Beyond the racetrack itself, both Frank and McCool relish the opportunity for a return engagement at Brighton because of the Canadian hospitality they received last year. The two drivers couldn’t overlook the fact that they were featured attractions that evening.

“They treated us real good,” said McCool, who will celebrate his 36th birthday the same day the WoO invades Brighton for the first time. “We had our cars up front before the races and signed autographs for the fans. They cooked for us, even had a party for us after the race. Everybody was so nice to us. We were the center of attention, that’s for sure.

“We’re ready to go back. When you get treated like we were, you can’t wait to go back.”

The ever-personable Frank expects another warm welcome from the Brighton faithful on June 20.

“The people up there were awesome,” said Frank, who has plans to put Belyea, a former Brighton Crate Late Model champion, behind the wheel of his second Rocket No. 1* for the Excel Tower 50. “The promoter, the fans, the other racers — everybody was so friendly all night. They even hung out with us after the race.

“We signed a lot of autographs and sold a lot of shirts last year, so hopefully we made some fans up there and they’ll stop by to see us and buy some more shirts this year.”

With Brighton part of a WoO swing that starts with an event on June 19 at Fonda (N.Y.) Speedway, the 25-year-old Richards sits atop the points standings over Clanton, Lanigan, Eckert and Tim Fuller of Watertown, N.Y. McCreadie, whose father, legendary big-block modified driver “Barefoot” Bob McCreadie, competed at Brighton more than 30 years ago, sits sixth in the standings, followed by rookie Eric Wells of Hazard, Ky., Frank, McCool, rookie Morgan Bagley of Longview, Texas, and Clint Smith of Senoia, Ga.

Advance tickets to Brighton’s $10,000-to-win WoO spectacular, the richest and arguably most highly anticipated race in the track’s history, can be purchased at worldofoutlaws.com/tickets orbrightonspeedway.com. Phone orders can be placed at (866) 681-1102 or (877) 395-6606.

All seats in Brighton’s two main grandstand areas are reserved at a price of $35 per ticket. A general admission seating/standing section will also be available in the lower North tower/bar area with tickets priced at $35 for adults and $20 for children ages 16-and-under.

Tickets ordered on-line or over the phone are subject to a one-time $5 convenience fee per order.

For this event Brighton Speedway is prohibiting coolers, blankets and seats with chairbacks in the grandstand. Only seat cushions will be permitted.

Additional information on Brighton Speedway and the Excel Tower Service 50 presented by Dibbits Excavating, Campbellford Chrysler and J.J. Stewart Motors can be obtained by logging on to www.brightonspeedway.com.