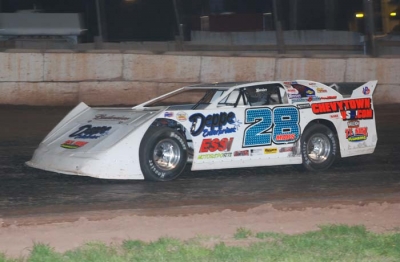 SHAWANO, Wis. (May 17) — With his 4-month-old son still recovering from bacterial meningitis, Jimmy Mars scrubbed his long-traveling weekend racing plans. Mars had already been away from on a racing trip when Taylor first checked into an Eau Claire, Wis., hospital on May 9, and while doctors were finding success in targeting the illness, Mars didn't want wander too far. | Postrace notebook | Prelims | Slideshow

It turns out the brand new Rumble Dirt Series, a new WISSOTA-sanctioned circuit offering the region's biggest purses ever, was launching its first event just three hours from the Menomonie, Wis., shops of Mars at Shawano Speedway, so Mars kept in close contact with wife Krista and headed to the half-mile oval feeling better about Taylor's prognosis after a few scary days. "When I left, he was smiling," Mars said. "When you see that, it makes you feel like things are going in the right direction."

There were more smiles around the Mars camp Saturday evening after Mars led all 66 laps of the series-opening Rumble Royal at Shawano, providing Mars a rare $10,000 payday without leaving his home state.

"Our first intentions were obviously to run the three races this weekend down in Iowa and Illinois, but with my kid being in the hospital, it just worked out being able to stay here, and I'll be home tomorrow," the polesitting Mars said after a victory at Shawano, which dodged a few ominous clouds and mid-race raindrops to get the race in. "It worked out good."

The unspoken truth around the Shawano pits was that WISSOTA's top runners, including the 12 Rumble Rustlers committed to the Seubert Calf Ranches-sponsored tour, would be battling for second with Mars, one of the nation's top dirt racers, in the pits with his No. 28. Runner-up Jeff Wildung, who started fifth and faded early before rallying to finish second — albeit nearly a quarter-mile behind Mars — spoke that truth after the checkered flag fell.

"We knew Jimmy was just going to be impossible to run down. He's such a good runner we knew he'd drive nice and straight and clean," the Nassau, Minn., driver said. "I guess we lucked out and ended up with second. We're happy with that, I guess. To run second to Jimmy is pretty good."

Mars indeed handling the hardened track conditions like a pro and was never challenged despite five cautions, including a midway stop so drivers could refuel in the long-distance affair. But Mars praised his regional counterparts and is glad that series promoter Terry Voeltz is throwing his support behind a long-needed series to bring bigger-purse events to the upper Midwest.

"All the WISSOTA guys, I don't think they get the credit (they deserve). If you look at the all the guys that have come out of WISSOTA and went on to do other things in open-style racing, they've all been competitive and had successful stuff," Mars said. "These guys that run around here are pretty good. They run as good as anybody."

While Mars wandered off into his own zip code most of the race, WISSOTA's best showed their skills with some great racing for the second spot. Just before the halfway point, Steve Laursen of Cumberland, Wis., held the second spot while front-row starter Chad Mahder of Eau Claire and Pat Doar of New Richmond, Wis., swapped third behind him. John Kaanta of Elk Mound, Wis., was a close fifth and Terry Anvelink was charging in to get the piece of the position-swapping action.

With Mars again in firm control for the second half of the race, more position-swapping continued behind him as many of the drivers who ran strong early faded in a rare long-distance event for WISSOTA drivers accustomed to races no longer than 40 laps, even for the fall invitationals. Kaanta was shuffled back on a lap-37 restart (with a donut on his driver's side door, to boot), Mahder briefly got into second before starting to struggle and Laursen's strong No. 19 developed a loose-handling condition.

That allowed Wildung to storm into the mix as he broke into the top five on lap 38 following by 16th-starting Justin Ritchie of New London, Wis., and Nick Anvelink of Bonduel, Wis., who had to change tires after a lap-seven scrape on the backstretch.

After the demise of Terry Anvelink on lap 43 as he pulled into the infield with steering problems, the 66-lapper ran green the rest of the way as the mid-packers continued their drive into the top five. Ritchie made a late charge and nearly caught Wildung for the second spot followed Nick Anvelink and Doar, the only early top-five runner to hold his spot. Laursen ended up sixth and Mahder slipped all the way back to 10th.

Wildung said that loading his car up with fuel threw off his handling earlier in the race, but the car improved as the fuel burned and shifted weight in his No. 50 Rocket Chassis. "I had such of a fuel load on, she's a little tight on the corner entry, and I couldn't come in the way I wanted to," he said. "We knew we weren't going to be that great at the beginning. We were basically setting up for the end of that race."

Ritchie ran the longest races of his career but was glad that his car was performing its best at the finish. "We've always had a car that gets better on long runs, and the longer we ran tonight, the better it went," said Ritchie, who earned $3,000 for the second-best purse of his career. "I came from the go-kart racing, so a lot of it has to do with car control, I think, and not spin the tires. ... the more laps you can make, the faster the car gets, and it just kept coming, too. We've never run this many laps locally, so this is a big deal for us tonight, to keep coming as the race went on.

"To run 35 laps before they threw the yellow for the fuel stop, we didn't know how that was going to turn out. So it was pretty interesting. It was pretty cool that the car kept going faster and better. We were coming. I needed a couple of more laps. I needed a 75-lapper is what I needed," he said with a laugh.

Mars, a chassis designer and dealer, praised his 5-year-old MasterSbilt car on a weekend when MasterSbilt from Mars cars swept the four heat races. "This car, it's 5 years old now, and it's just as good as when it was brand new. It's a good one," he said. "Hopefully, we've kind of gotten some of the gremlins out ... and when my kid gets better, I'll be back to 100 percent, gassing on it and ready to go. I'm excited about next week and going to West Plains (Mo.)" for the $42,000-to-win Show-Me 100.

Notes: The winning MasterSbilt has a Pro Power engine and sponsorship from Deppe Enterprises, T.L Sinz Plumbing and ESSI Motorsports. ... Mars had three previous victories in 2008, but they all came in a Jess Anderson-owned car at Central Arizona Raceway and in Las Vegas. ... If all goes well, Taylor Mars is expected to be released from the hospital on May 21. ... None of the feature's four cautions were for serious events. Nick Anvelink lost a tire on the seventh lap and 12th-starting A.J. Diemel of Bonduel, Wis., damaged his nosepiece when he hit a tire barrier while battling John Kaanta for fifth position on the 12th lap. ... Lance Matthees got into an infield tire on lap 37 after a scrape with Mark Mitchell in turn two.