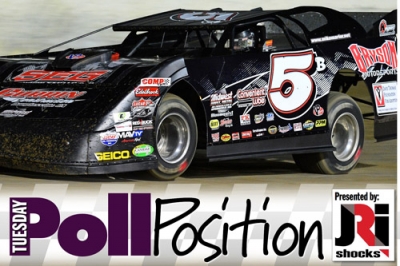 Coming off his first victory of the season, Mike Marlar was the biggest mover in this week’s DirtonDirt.com’s Top 25 power rankings as the Winfield, Tenn., rising to No. 15 in the poll presented by JRi Shocks.

Marlar, who overtook Don O’Neal of Martinsville, Ind., with nine laps remaining at Magnolia Motor Speedway’s Lucas Oil Series-sanctioned Clash at the Mag, gained eight spots in the poll by virtue of his $20,000 payday, his first victory since a two-win weekend in November.

There was otherwise little movement in the rankings with World of Outlaws Late Model Series points leader Josh Richards of Shinnston, W.Va., holding the No. 1 spot he’s held all but one week this regular season. Richards received 14 of 22 first-place votes while No. 2 Jimmy Owens of Newport, Tenn., who finished fourth at Magnolia, received seven first-place votes.

The only other driver receiving a first-place vote was Dennis Erb Jr. of Carpentersville, Ill., whose UMP DIRTcar Summernationals victory at Brownstown (Ind.) Speedway was his sixth of the season. Erb holds the No. 5 spot behind steadfast Darrell Lanigan of Union, Ky. (No. 3) and Shane Clanton of Zebulon, Ga. (No. 4).

Returning to the poll was Chris Madden of Gray Court, S.C., who holds the No. 23 spot after back-to-back Southern All Star victories at Volunteer Speedway in Bulls Gap, Tenn., and Smoky Mountain Speedway in Maryville, Tenn.

After restricting poll voting to staffers the previous two seasons, DirtonDirt.com invited more than 30 media members and drivers along with track, series and manufacturer representatives to vote in 2013’s rankings. Twenty-two submitted ballots this week. Weekly polls continue through mid-November.

Comment: Debuts Bloomquist Race Car with $20,000 victory at Magnolia for his first victory of the season. Series points: None. Last week's ranking: 23rd (+8)