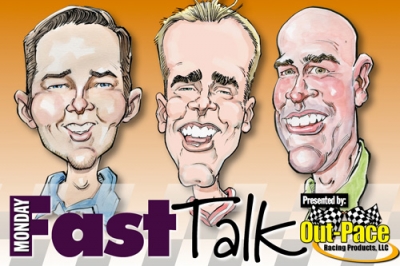 Joshua Joiner: It’s been a busy stretch of racing since our last discussion with the UMP DIRTcar Summernationals getting under way and the Lucas Oil Series racing for $20,000 at Magnolia Motor Speedway’s Clash at The Mag. We’ll talk plenty about the Summernationals today, but let’s first start by reviewing Mike Marlar’s victory Saturday at Magnolia.

Marlar is no stranger to big wins, with a pair of Hillbilly 100 victories and a pair of Magnolia State 100 wins that all paid more than $20,000. But this weekend’s victory was at least somewhat surprising, with Marlar winless through the first half of the season and with his Bryson Motorsports team debuting a Bloomquist Race Car.

I have to imagine that Marlar and the Bryson Motorsports guys are pretty happy with their new ride so far, don’t you guys think?

Todd Turner: Marlar is one of those guys, as he has proven, can win driving just about anything. And come to think of it, it seems like he always gets off to a quick start with a car or team switch. (Remember the Warrior house car? Or him winning at Florida Speedweeks in a car mothballed for a year?)

That he won in a Bloomquist is intriguing because I think everyone always has a keen eye on who performs well in those cars, even as they're more broadly available these days then the exclusive teams of a few years ago. Marlar hasn't been racing much so it's good to see him back in the mix.

Michael Rigsby: I'd certainly put this down as one of the "landmark" wins of 2013 ... probably now, and at the end of the year. I kept saying, wouldn't it be cool if Mikey would go out and win this weekend in that car for the FIRST TIME, really kind of not expecting it at all. I think Marlar is that driver in our sport that virtually everyone loves, so seeing him get a win like that was great.

JJ: For much of the race, it appeared that Don O’Neal would repeat his Clash at The Mag victory from last season, but a late restart helped Marlar thwart that idea.

O’Neal has been one of the sport’s top drivers over the past few seasons, and his near-miss Saturday was definitely a strong performance. But his only victory this season was all the way back during Speedweeks, while last year he already had 10 wins by this point in the season. What do you guys think of O’Neal? Is this just a slump he'll soon break out of?

TT: Over the last two seasons, including his Dream victory and his series-leading victories on the Lucas Oil tour, the book on O'Neal was that he'd learned to become a little more patient, reining in his mash-the-gas style in winning some of the longer races. And I think we'll look at the past few seasons as a prime of what was already an impressive career.

That said, O'Neal turns 49 next month, and while I would never try to send a driver out to pasture — witness the success of guys older than him like Billy Moyer, Scott Bloomquist and (even last night) Kevin Weaver, the wins may be a little fewer and farther between, especially after his dominating season last year. And that MasterSbilt house car team has also really left it all out there in recent seasons following a national tour ... it wears on you, and perhaps some of that is showing.

MR: O'Neal is definitely a "bunches" guy ... he's always won races in bunches, and I'd expect that when he breaks the seal on the "regular season" it will open up. He's been hit and miss, but he's getting closer. Maybe a few runs in the Moring Motorsports car during the Summernationals where he's not points racing might allow him to go out there and just wheel it.

JJ: The 28th season for the Summernationals got under way this week with three races. Dennis Erb Jr. won the opener Wednesday at Brownstown; Brian Birkhofer won the first of two weekend races Friday at Cedar Lake while rain claimed Saturday’s; and Kevin Weaver scored his first series victory since 2008 Sunday at Wilmot.

What are some of your reactions to what we’ve seen from the Summernationals action so far?

TT: Weaver's a pretty compelling storyline so far, for sure. It was early when he broke leading at Cedar Lake, but he appeared like he had a car to win there, and then his victory last night at Wilmot reaffirmed it.

As Michael and I talked about last night, this shows given top-notch equipment — he's using a motor that seems like the best piece he's brought to the tour in a while — that he can still get it done. It'd be neat to see him legitimately in a points chase that's relatively wide open.

And Weaver's always got a great sense of humor and perspective on racing, even when things aren't going well. It was great when Weaver and Birkhofer were chatting last night at Wilmot, talking about Birky's victory at Cedar Lake after Weaver broke a driveshaft. Said Weaver: “I just wanted to see if he could miss the parts flying."

MR: It's been an odd first week ... we'll have gone seven days and had three races ... and driven a lot of miles. I know we're going to talk more about that in a minute, but I think as far as drivers go, it has to be Weaver like Todd said. He's in a new Pro Power motor, and it's amazing with the fresh equipment. How good he looks again, and really when you look at the rest of the tour ... how many races can Weaver win? Three? Four? Hard to say.

JJ: Summernationals officials revamped the tour’s schedule this season, expanding to a record 31 races in 39 days. It’s still early, but so far, it doesn’t appear that the changes have helped, with a dip in car counts (including a drop of 16 cars from last year for the opener at Brownstown) and the loss of a few series stalwarts in guys like Feger, Sullivan, Van Wormer, Shirley, Erb for various reasons.

Both of you guys have been in the thick of things covering the tour, what’s you reaction to the overall quality of the series so far this year?

TT: First off, everything we say is out of love for the series, because for both Michael and I, the Summernationals is entrenched in the essence of everything we love about Dirt Late Model racing.

That said, we've seen ups and downs on the Summernationals over the years, but this season looks like a slide that's going to be tough to pull out of. And it begs the questions if we're heading the wrong direction in keeping it vibrant.

The series that was 10 or 12 races in a row more than 20 years ago grew and grew, and now it's so long and far-flung there's no definition. And the extra off-days this season simply encouraged it to stretch to six weeks, which is too long for a series that needs to be bang-bang to make it work.

I feel for series director Sam Driggers, because I know scheduling is tricky with certain requirements, tracks wanting certain days, some political back-rubbing, etc. ... but when I always hear there are 15 more tracks that want races, can't we play a little more hardball in carving out a more reasonable schedule?

MR: For me it's hard to say. Is it just a this year thing (as other places are struggling with car counts, etc.) or are we looking at a bigger problem? I think at it's core the Hell Tour is still going to be relevant and provide good racing. The issue I see now is that it's just grown so big, with so much criss-cross-ey travel, that you can't get your arms and mind around it at all.

It needs to be a tightly defined 25-26 races, where you really have a purpose and understand on when/where you're going. I will say this ... Sam Driggers has one of the hardest jobs in the sport. Trying to get this many tracks and dates ironed out with politics and other things involved make his job is, well ... hellish.

I just think that maybe when this year is over, we take a good, long, hard look at tightening this thing up, and making it look more appealing. Because honestly perception and the "mental" part of this tour is big. If you demoralize a guy just by looking at the schedule ... that's become a big problem.

TT: No offense to the guys on the tour, and I credit anyone tackling it, but this year's version is a far cry from recent seasons and doesn't match up to the best of the Summernationals — some calling last night's field among the weakest they've seen. And I've had conversations with drivers on this year's tour who see the same things and worry about the future of the series.

JJ: The good news is there’s plenty of time for the series to pick up so momentum. Perhaps the two-day break starting today will help draw more cars to Wednesday’s race at Spoon River Speedway, which kicks off a stretch of six straight nights of racing.

What are some of the storylines you guys are watching as the series moves forward?

TT: Illinois is clearly the heart of the series, so things should pick up during this stretch (don't get us started about the outlier trip to Michigan in the middle of it).

Brandon Sheppard is off to a solid start and in the points lead of a tour where three-time champ Shannon Babb is the prohibitive favorite, so it's nice to see Sheppard in a position where two runner-up finishes have built some confidence early in the tour. How Sheppard handles the adversity of a bad finish or a wreck or a rough patch is what everyone should watch for, because if he rebounds quickly, Babb will have his hands full.

Sheppard had his critics with his slide-jobbing run at Cedar Lake, but in reality, he drove a smart race, and when it was clear that he was closer to wrecking than winning as the track changed late in the race, he settled for second to Birkhofer — and a big points night after starting mid-pack.

JJ: I've had my eye on Sheppard as well. He's still young, but by now, he's had enough experience that he should be able to challenge for the title. He certainly could use a good tour with a few wins and perhaps the title after his career has almost seemed to hit a bit of a plateau lately.

MR: We talked a lot about Tyler Reddick coming into the tour, and so far he's struggled out of the gate. He needs a good second week to get rolling. Ryan Unzicker also struggling but he's battling some car issues that are keeping him from being 100 percent. I'd really love to see a Sheppard, Babb, Weaver and one more guy in a four-way points battle. The tour could use that.

TT: Agreed. ... for all our hand-wringing, a tense points chase with some Summernationals-type wackiness would be welcome, for sure.