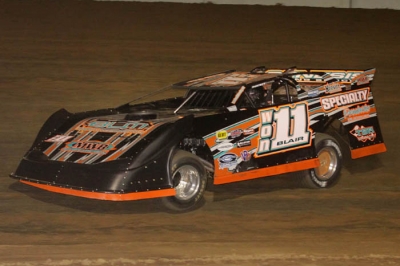 Dan Stone of Thompson, Pa., raced from 10th to second in finishing behind Blair with Vic Coffey of Caledonia, N.Y., in third. Mike Knight of Ripley, N.Y., whose two-race win streak was snapped, and seventh-starting Tim Fuller of Watertown, N.Y., rounded out the top five.

Knight and Blair started on the front row with Blair taking the early lead over Knight and Ron Davies. A lap-five yellow appeared when Bob Close broke a spindle and lost his left-front wheel.

Blair went back to work with Knight and Coffey in pursuit while Stone worked his way into the top five.

Reigning ULMS champ Boom Briggs slowed in turn four to draw the next yellow, and Coffey took second from Knight on the restart while Stone dropped Fuller to fifth. Stone was up to third by lap 27 and two laps later took the second spot from Coffey while Blair held a half-straightaway lead.

Stone made up a little ground on Blair, but not enough to make a challenge in the remaining laps.