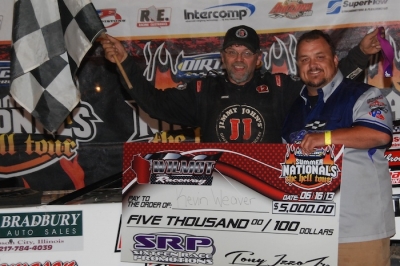 Starting outside the front row, the 2000 Summernationals rode the high side to a $5,000 victory, the 17th of his career and first since 2008 at Macon (Ill.) Speedway. He was glad things held together this time around. | Complete Summernationals coverage

“It was just an awesome car and an awesome race for me tonight," the 50-year-old Weaver said.

Pole-starting Brandon Sheppard of New Berlin, Ill., drew close to Weaver a few times but finished 10 lengths back in second to increase his series points lead. Brian Birkhofer of Muscatine, Iowa, managed a third place despite starting with an engine running only seven cylinders while Shannon Babb of Moweaqua, Ill., and Ryan Unzicker of El Paso, Ill., were far behind in fourth and fifth in the 40-lapper.

Weaver, making his Wilmot debut, got the jump from outside the front row and led a three-car breakaway with Sheppard and Birkhofer after 10 laps as the fourth-running Babb was more than a straightaway behind Birkhofer. Weaver’s choice of the high groove allowed him to cruise past the lower-running lapped cars easily, but he got nearly sideways a few times exiting turn four to make things interesting as Sheppard kept the leader in his sights.

After a caution before the race’s midpoint, Weaver built his biggest margin on Sheppard by lap 25, comfortably a half-straightaway ahead. A pack of slower cars in the last 10 laps made things interesting for a while, but when Weaver slipped past 11th-running Jason Jaggers in the final five laps, it gave him a cushion that Sheppard couldn’t overcome. The runner-up said it would've been tough to overtake the high-running Weaver.

“The bottom all the way up to the cushion was just so slick and slippery, I really couldn’t do nothing with him," Sheppard said. "But we gave it all we had."

Weaver led the first nine laps of Friday's Summernationals event at Cedar Lake Speedway in New Richmond, Wis., but he got too high in turn one, causing damage that broke his driveshaft and knocked him out of a race won by Brian Birkhofer.

Two yellow flags slowed the action. The first start was scrapped when Todd Frank and Tim Lance tangled in turn one, then a lap-16 yellow flew when Russ Scheffler spun in turn four.

The 31-race series takes two days off before returning to action Wednesday at Spoon River Speedway in Banner, Ill., for another $5,000-to-win event.

Notes: Weaver’s Pierce Race Car has a Pro Power Racing engine and sponsorship from Jimmy John’s and Bradbury Auto Sales. ... His last series victory came Aug. 16, 2008, in a series makeup race at Macon (Ill.) Speedway; his previous regular-season series victory came June 21, 2007, in Jacksonville, Ill. ... Fifteen of 20 starters were running at the finish and 10 were on the lead lap.

Randy Korte won the C-main to transfer to the main event along with Todd Frank and Dan Schlieper.

Brian Birkhofer’s chances of back-to-back Summernationals victories are over. He broke a lifter in the engine during his heat race victory and won’t compete in the main event. “I’m just going to take a lap and pull off,” the Muscatine, Iowa, driver said. Crew chief Zach Frields knew there was a problem before the No. 15B returned to the pits. “I could tell on the racetrack,” Frields said as he worked underneath the hood. ... Brandon Sheppard drew the pole for the feature with Kevin Weaver alongside; Birkhofer is third in the lineup but he’ll tag the tail, moving up the inside lane. ... Sheppard’s crew went to work under the hood replacing water pump gaskets, but they didn’t expect any other problems. ... Tim Lance spun out of his heat race and knocked the fan into the radiator; the team is making repairs. ... Dustin Griffin was among the quickest qualifiers but slipped back to third in his heat race when Sheppard and Shannon Babb went around him on the outside. “I went to that top and I wasn’t any good up there. ... B-Shepp and Babb could make it work,” said Griffin, who starts the feature outside the fourth row. He’s not taking a series provisional for the first time in three races. “Hopefully we’ll get that monkey off our back that we’ve had the first two nights.” ... At the redraw, Birkhofer and Weaver joked about Birkhofer’s Friday victory at Cedar Lake after Weaver broke a driveshaft. “I just wanted to see if he could miss the parts flying,” Weaver cracked.

After allowing outside front-row starter Bobby Pierce to edge ahead early, pole-starting Kevin Weaver fought back in the inside groove to go ahead on the third lap and lead the rest of the way. Pierce finished second in the caution-free prelim while Scott Schmitt, Tyler Reddick and Chris Simpson got the other transfer spots. Reddick worked the high side of Schmitt throughout the race but couldn't get third.

Making an outside pass midway through the race, Brandon Sheppard overtook Dustin Griffin and grabbed a victory in the second heat. Fifth-starting Shannon Babb dropped griffin to third on the eighth lap to get the runner-up spot while Griffin, whose early lead was once saved by a caution, was third. Brad Mueller and Rich Bell got the final transfer spots. Three yellow flags appeared. The race's first caution spun on the first lap when Tim Lance spun atop turn four; he was pushed off the track. The third-running Mueller spun inside turn two on the fourth lap for another yellow, then Jason Enoch spun outside turn one after getting a flat left-rear tire. Jeff Riddell also exited with a flat tire after getting tangled up with Mueller on the lap-four restart.

Brian Birkhofer led all 10 laps from the pole position to earn a top-three starting spot in the main event. Birkhofer had a half-straight lead by halfway and cruised to victory in the race slowed by a single caution for Todd Frank's turn-three spin midway through the race. Jason McBride was second ahead of last year's Wilmot winner Ryan Unzicker to transfer to the main event along with fourth- and fifth-place finishers Jason Jaggers and Russ Scheffler, who started outside the front row but slipped back early.

Brian Birkhofer of Muscatine, Iowa, topped 25 qualifiers Sunday at Wilmot Raceway for the third leg of the 31-race UMP DIRTcar Summernationals, the month-long grind through the Midwest and beyond.

Birkhofer turned a lap of 15.030 seconds and will start on the pole of one of three heat races at the 3/8-mile oval. Other heat race polesitters: Dustin Griffin of Camp Point, Ill., and Kevin Weaver of Gibson City, Ill.

The sprint-car stronghold at the Kenosha County Fairgrounds is hostings a rare Late Model event with last year’s last-lap winner Ryan Unzicker of El Paso, Ill., among the entries. ... The series points leader heading into the event is Brandon Sheppard of New Berlin, Ill. ... Previous series winners are Dennis Erb Jr. of Carpentersville, Ill. (Wednesday at Brownstown, Ind.) and Brian Birkhofer of Muscatine, Iowa (Friday at Cedar Lake Speedway in New Richmond, Wis.). ... Saturday’s $10,000-to-win event at Cedar Lake was rained out. ... Among surprise entries is two-time Summernationals race winner Dan Schlieper of Oak Creek, Wis., driving the Pierce Race car owned by Bob Cullen of Chilton, Wis. “This is a low-key operation here,” said Schlieper, scheduled to race at Sheboygan County Fair track in Plymouth, Wis., before that raced rained out. ... Besides a dozen series regulars, several Wisconsin Dirt Late Model Association drivers are entered, including last year’s champion Russ Scheffler. He’ll drive an open-competition car, but other WDLMA drivers will give up some horsepower with their limited motors. Jim Letizia of Milwaukee isn’t worried: “We’ve got a pretty good motor, so we should be OK. ... His son Turk was scheduled to race but had engine problems earlier in the weekend. ... The Badger Mod Tour has drawn about 50 entries. ... Wilmot’s street division is also in action.