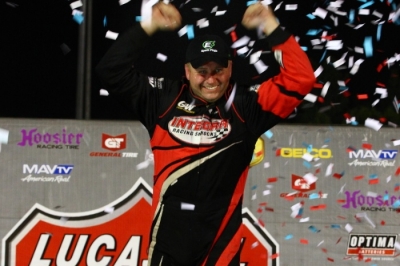 COLUMBUS, Miss. (June 15) — Mike Marlar turned his first race in a Bloomquist Race Car into a career highlight Saturday night at Magnolia Motor Speedway with a $20,000 victory in the Clash at The Mag Presented by the Columbus Convention and Visitors Bureau main event.

After running among the top three for the entire race, Marlar benefitted from the race’s fourth and final caution with 88 laps complete and rallied past Blankenship of Williamson, W.Va., and O’Neal on his way to his first victory of the season and the fifth of his career on the Lucas Oil Series.

"When I saw the caution come out, I got down in some dry dirt on the bottom of the track, and then I had to clean my tires off really good for the restart," said Marlar. "It was good to have one more shot at it there at the end. I lined up beside Blankenship for the restart, and my car took off really well up top, and it only took us a few laps to get by O'Neal. They had an awesome race track here tonight, we have always enjoyed coming down here to Mississippi to race, and they have a lot of great fans here."

O’Neal settled for the runner-up finish with Blankenship third. Two-time defending series champion and current points leader Jimmy Owens of Newport, Tenn., advanced from the 12th starting spot to finish fourth with 17th-starting Randy Weaver of Crossville, Tenn., rounding out the top five in a race slowed by four cautions.

O'Neal, who topped the 46 car field during time trials and won his heat during Friday’s preliminary action, looked like his Optima Batteries-sponsored MasterSbilt Race Cars house car was the car to beat all night as he withstood challenges from both Marlar and Blankenship for the first half of the race. He built a comfortable lead as the race entered its closing stages, but the caution with 12 laps remaining set up a finish that O'Neal did not want to see.

"No we didn't need that caution,” said O’Neal, who’s still looking for his first victory since February’s Speedweeks. “Our car was good all weekend, to run 100 laps here tonight, we thought tire wear was going to be a factor, but it was not. Congrats to Mikey on the win. The way the last few weeks had went we needed a good finish and we got it.”

Blankenship didn’t want to see the lap-88 caution either. He thought his Coal World's Energy-sponsored Rocket Chassis was capable of catching O’Neal if the race had gone green, but the caution worked in Marlar’s favor instead of his.

"We didn't need that caution either; we were slowly catching Don,” said Blankenship, who continued to cut into Owens’ points lead with his fourth top-three finish in the past five Lucas Oil Series events. “I don't know if I could have ever passed though. The track was real racy all night. My car was better on the bottom; his (O'Neal) car was better getting into the corners; we were a tick better off the turns. It would have been real interesting in those final laps if not for the caution."

Notes: Marlar’s Bloomquist Race Car is powered by a Clements Racing Engine with sponsorship from Convenient Lube, Midwest Sheet Metal, Dave Thomas Foundation for Adoption, Currin Construction, VP Race Fuels and Keyser Manufacturing. ... The victory is Marlar’s fifth of at least $20,000. He earned $25,000 Hillbilly 100 victories in 2004 and 2012 and Magnolia State 100 victories worth $20,004 in 2004 and $25,010 in 2010. ... There were some postrace fireworks between Bub McCool and Scott Bloomquist — running back in the pack — when they got into a scrape on the cool-down lap with Bloomquist spinning McCool out. McCool angrily confronted Bloomquist on the frontstretch while Bloomquist sat in his car with his helmet still on. ... The Clash at The Mag was the second of nine points races in the ASi Racewear Crown Jewel Cup presented by DirtonDirt.com; the Crown Jewel Cup winner earns a $10,000 bonus at the series' year-end banquet. ... Eric Cooley of Fulton, Miss., was the highest home-state finisher in 12th. ... The race was slowed by four cautions on laps 34, 64, 67 and 88. ... Lucas Oil Series competitors head to Swainsboro (Ga.) Raceway, Cherokee Speedway in Gaffney, S.C., and Wythe Raceway in Rural Retreat, Va., June 20-22 for a trio of $10,000-to-win programs.