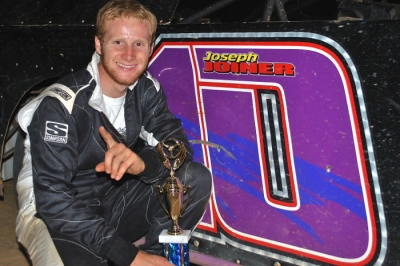 Joseph Joiner led every lap in winning the first Late Model race held at NWFS in over two years. (DirtonDirt.com)

Joiner, who claimed back-to-back Late Model track titles at Northwest Florida Speedway’s quarter-mile oval in 2009 and 2010 before the track shut down after only three races in 2011, led every lap of Friday’s unsanctioned special event for a $1,000 payday.

“It was nice to come back up here and leave with a win,” said Joiner, whose victory came on the track’s third night of racing since it was reopened by former Late Model racer Scott Sessions. “We haven’t been here in a couple years, and I’m definitely glad they decided to run the Late Models. Hopefully they keep running us, so we can come back and keep it rolling.”

Claiming his fourth victory in eight starts this season, Joiner led fifth-starting Jason Phillips, also of Milton, to the finish in a race slowed by six cautions and one red flag period.

Cody Smith of Holt, Fla., recovered from ignition issues during qualifying to rally from the tail of the field to finish as the last car on the lead lap in third, while Darrin Joiner of Brewton, Ala., and Todd Jones of Pace, Fla., rounded out the top five.

Starting alongside fast qualifier Bo Odom of Flomaton, Ala., Joiner got the jump from the outside of the front row on the race’s initial start and never looked back. He built nearly a half-track advantage as the race’s first nine laps ran caution free, then survived a bevy of mid-race restarts before once again opening a large lead during another lengthy green-flag run through much of the second half of the race.

A late caution gave Phillips and Smith a final shot at Joiner in a green-white-checkers finish, but Joiner cruised through the final two laps in picking up the victory.

“My guys were giving me some signals under the cautions, so I knew I had a pretty good lead every time we got going,” said Joiner, a 19-year-old second-generation racer. “I figured they were doing some wrecking back there, but I just knew if I kept my nose clean, they really couldn’t hang with us. Our car was hooked up tonight.”

Racing for just the third time this season, Phillips dropped out of the top five early in the race, but recovered to move to fourth by halfway. He then used a strong move through the bottom of turns one and two on a restart to move by both Kody Barber of Bogalusa, La., and Taylor Jarvis of Milton, Fla., for second.

“It was good to be back racing here tonight,” said Phillips, a long-time competitor at NWFS and nearby Southern Raceway in Milton, Fla. “The track was in pretty good shape. We were able to move around on those restarts and pick off a few spots here and there.”

Smith, who competes in both Supers and Crate Late Models, elected to run his 604 crate engine-powered car for Friday’s race, thinking it would work better on short track. He earned an extra $100 bonus for being the highest finishing Crate car.

“Usually, the crate engines are pretty competitive here, but tonight the track was just really hooked up,” said Smith, who entered the event fresh off his first Super Late Model victory of the season June 8 at Deep South Speedway in Loxley, Ala. “We just didn’t quite have enough tonight, but we hung in there and finished third, so we’ll take it.”

The race was red-flagged for nearly 15 minutes just after the halfway point when Phillips and Jarvis tangled while battling for second. The two drivers ran side-by-side into turn three with contact between the right-rear of Phillips’ car and the left-front of Jarvis’ sending Jarvis off the top of the racetrack and up and over onto his roof. Jarvis wasn’t injured, but his car suffered heavy damage.