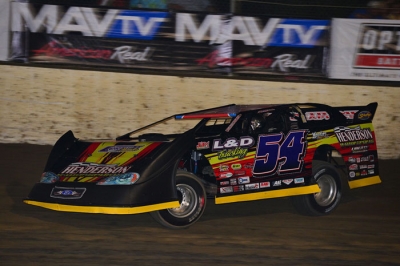 David Breazeale will start on the pole Saturday at Magnolia. (rickschwalliephotos.com)

O’Neal, who topped 46 entries with a lap of 14.077 seconds during Friday’s time trials and later led every lap of the first heat race, will start from the outside of the front row in Saturday’s 100-lap main event at the 3/8-mile oval. | Slideshow | Video

David Breazeale of Four Corners, Miss., who won Friday’s second heat, will join O’Neal on the front row after a redraw among the night’s four heat race winners. John Blankenship of Williamson, W.Va., and Mike Marlar of Winfield, Tenn., also won heat races to earn second-row starting spots. Marlar, who debuted a Bloomquist Race Car at the event, will start to the inside with Blankenship on the outside.

O’Neal, looking for his first victory since Speedweeks, took the lead on the start of the first heat and fought off an early race challenge from Jared Landers of Batesville, Ark. O'Neal’s Optima batteries-sponsored MasterSbilt Race Cars house car pulled away from Landers in the last half of the 10-lap prelim to take the win.

Landers was second followed by Billy Moyer, Jr. of Batesville, Ark., and hometown Brian Rickman in a race that transferred the top four finishers to Saturday’s main event.

The second heat race was featured a familiar battle with regional standouts Breazeale and Chris Wall of Holden, La., racing hard for the top spot throughout the 10-lap race. The two drivers ran door to door with Wall pulling even with Breazeale several times. Wall made one final bid to overtake Breazeale exiting turn four on the final lap but fell just short of the win.

Driving the L&D Trucking MasterSbilt for Henderson Motorsports, Breazeale was followed at the finish by Wall, Billy Moyer of Batesville, Ark., and Jack Sullivan of Greenbrier, Ark.

Blankenship, who entered the event having won two out of the last three Lucas Oil Series events, kept Steve Francis of Ashland, Ky., at bay the entire 10 laps of heat three. Francis stayed close to Blankenship’s Coal World's Energy Rocket Chassis for most of the race but couldn’t find a way around.

Marlar took the lead on the start of the fourth heat and cruised in winning the race going away. It was the first race for Marlar in a Bloomquist car that was just recently purchased from John Blankenship. Multi-time series champion Earl Pearson Jr. of Jacksonville, Fla., was second followed by two-time reigning series champion and current points leader Jimmy Owens of Newport, Tenn., in third. Eddie Carrier Jr. of Salt Rock, W.Va., finished fourth in his first-ever appearance at Magnolia.

The Clash at the Mag concludes Saturday with a pair of 12-lap consolation races that each transfer the top three finishers into the 100-lap main event.

Notes: The Clash at the Mag is the second of nine points races in the ASi Racewear Crown Jewel Cup presented by DirtonDirt.com; the Crown Jewel Cup winner earns a $10,000 bonus at the series' year-end banquet. ... Rick Rickman was running in the fourth in the first heat when he lost an engine near the end of the race. ... Bloomquist entered Magnolia fresh off a $100,000 Dream XIX victory. ... Reigning NeSmith Chevrolet Weekly Racing Series champion Chase Washington topped 35 entrants for a victory in the Crate Late Model feature. ... Washington visited victory lane in his first start since Speedweeks after he was diagnosed with Non-Hodgkin's lymphoma; he had been sidelined while undergoing chemotherapy and Scott Dedwylder filled in behind the wheel of his No. 38 Crate ride. Dedwylder was originally scheduled to pull double duty in both Late Model classes this weekend, but after Washington felt well enough shaking the car down in Friday's hot laps, he elected to race himself.