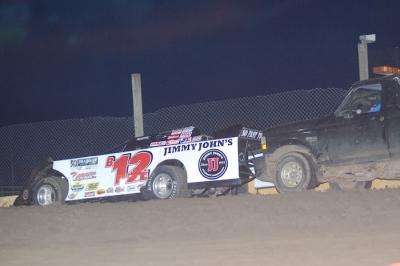 Kevin Weaver is pushed off the track. (DirtonDirt.com)

NEW RICHMOND, Wis. (June 14) — Kevin Weaver has been winless on the UMP DIRTcar Summernationals since 2008, the same season he made his last trip to Cedar Lake Speedway.

So the 49-year-old driver from Gibson City, Ill., the 2000 series champion, wasn’t exactly among the favorites at the 3/8-mile oval’s first of back-to-back series events Friday night. That is until Weaver grabbed a victory in a heat race, earned a front-row starting spot for the 40-lapper feature, and built a comfortable lead early in the main event. | Complete Summernationals coverage

Suddenly it appeared Weaver was in solid contention for his 17th series victory and first since nearly five years earlier at Macon (Ill.) Speedway.

But Weaver’s would-be return to glory on the Summernationals was short-lived. A bent panhard bar triggered a broken driveshaft, sending his familiar No. B12 back to the pits with the help of a push truck.

“I’m going to say it was a weak — a very weak — panhard bar,” Weaver said with a laugh after the second leg of the 31-race tour. “We can’t blame the driver yet. It’s too damn early.”

It was a big disappointment for a driver who could use the $5,000 payday, but he hopes his run — minus the mistake that caused the malfunction — is a sign he’s ready to win again on the series, maybe as soon as Cedar Lake’s $10,000-to-win event Saturday night. Brian Birkhofer of Muscatine, Iowa, captured Friday’s 40-lapper, but Weaver appeared to have as fast a race car as anyone on the track.

He dueled side-by-side with fellow front-row starter Brian Shirley of Chatham, Ill., for a few laps before pulling away, but his run ended on the ninth lap in turn one.

“It was basically driver error,” Weaver said, correcting the record from his previous comment. “I came into the corner too hot there and just hit that berm down there going into turn one, and the car, it just stuck on that when I hit that berm. It just bent the damn panhard bar, and once it bent the panhard bar, it let the rear end go to the left, then it cut the driveshaft out of it.”

The breakage ended what was otherwise an relatively effortless run for Weaver.

“It was feeling pretty good. It was easy laps. I wasn’t really hustling the car. Just good and smooth,” he said. “I really didn’t think it’d be up on the top ... I felt like the middle was probably going to be the place to be, but I felt so good up there and I wasn’t getting any pressure, so I thought, 'Well, hell, I’ll just stay up here.' And then brain fart up there — I just leaned on it a little bit too hard.”

The good news? His Pierce Race Car isn’t too worse for the wear.

“The panhard bar didn’t break. If it had broke, it would’ve have been catastrophic,” he said. “It probably could’ve even flipped because of the momentum we carry into that corner.”

Instead, the bent panhard bar moved the rear end "over about 7 inches and stopped. Really pretty fortunate it didn’t tear up a lot of stuff. I didn’t feel like (the engine) hit the chip or anything. When it done it, it bounced, and bounced, and then that’s when it took the driveshaft out, because the rear end went so far that way, the driveshaft got into the interior.”

Weaver can only focus on the confidence boost he got from his strong run at Cedar Lake before everything went bad.

“I just hope ... I feel like we had a good car. I think the track conditions, hopefully it’ll be like this tomorrow. We’ll see how it goes.”