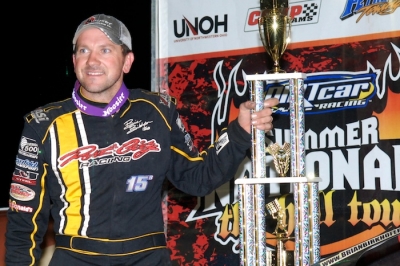 NEW RICHMOND, Wis. (June 14) — Third-starting Brian Birkhofer of Muscatine, Iowa, survived a mid-race challenge by 12th-starting Brandon Sheppard, then edged away over the final five laps for a $5,000 victory in the second leg of the 31-race UMP DIRTcar Summernationals. | Complete Summernationals coverage

Birkhofer inherited the lead on the ninth lap when Kevin Weaver of Gibson City, Ill., lost a driveshaft in turn one, then led the rest of the 40-lapper for his 10th career victory on the series. He’ll go for a weekend sweep Saturday in a $10,000-to-win event at the 3/8-mile oval.

While Birkhofer led the last 31 laps, Sheppard, of New Berlin, Ill., charged into contention by the 10th lap. He took second from polesitter Brian Shirley of Chatham, Ill., on the 13th lap and began sizing up Birkhofer.

He lost ground on a lap-16 bobble, then got close enough Birkhofer to slide underneath the leader entering turn three on the 20th lap. He easily cleared him but slide so high in turn four his No. B5 got bogged down in the high side mud, allowed Birkhofer to easily move back past along with Shirley.

“I saw Sheppard go in there. I knew I was a little loose, but I had to run the top, so I had to kind of back-pedal a little bit on the throttle and gave him the opportunity, I said, 'Well, turn back under him man, and just go up there, and if he’s better, he’s going to get by you anyway,' ” Birkhofer said in victory lane. “Congratulations to them guys for running well. I thank Brandon, he’s a good kid. He took the line but it was nothing dirty. He was racing hard, and I thought it was great. It was great racing. I didn’t see it behind me, so I’ll get to watch it on video, but we got the biggest paycheck, so that’s the most important thing.”

Sheppard, who moved into the series points lead, knew he had to take a shot at the leader with a slide job when he had the opportunity.

“I kind of slid across the middle, and I thought 'Maybe it’ll hold, maybe it wouldn’t.' I just had to go for it and see what would happen,” Sheppard said. “Unfortunately we jumped the cushion a little bit, and it slowed me up quite a bit. But like I said, I’m happy with the run we had tonight. It’s been better than we have been running.”

The top three ran the high groove the next 14 laps without incident, but when Birkhofer put a Jake Redetzke a lap down with six laps remaining, he got some breathing room. Sheppard regain second from Shirley but couldn’t get past Redetzke until the final lap in finishing a half-straightaway behind in second.

Shirley was third with 11th-starting Jason Krohn of Slayton, Minn., in fourth in just his second career Late Model start. Bobby Pierce of Oakwood, Ill., rounded out the top five. Chad Simpson of Mount Vernon, Iowa, ran in the top five most of the way but pulled his overheating car to the infield late in the race.

Three cautions slowed the action. Fast qualifier Jimmy Mars drew a third-lap caution, then Weaver’s demise brought out a lap-nine yellow. The final caution appeared on the 10th lap when Sheppard and fourth-running Brady Smith made contact at the end of the backstretch, flattening Smith’s right-front tire.

Correction: Fixes Korte as sixth-place finisher ahead of Babb.

Provisional starters are Shannon Babb, Dustin Griffin, Jason McBride and Steve Isenberg (track). ... Griffin blew a radiator hose off in his heat but should be ready to go. ... UMP director Sam Driggers is fine after getting struck in the forehead by a rock while watching the first heat outside turn four. He's wearing a bandage and gauze applied by ambulance personnel. "It didn't hurt me, but it wouldn't stop bleeding," said Driggers, who went to the pit gate seeking a towel. The ambulance found him there. "It was just gushing and gushing," he said. .. Chad Simpson was he was a little surprised at contact from Brian Birkhofer in their heat race battle. "He got into me pretty good," said Simpson, adding that it unsettled his car and allowed Birkhofer to retake the lead. "Oh well, it's racing." ... Kevin Weaver is using a new Pro Power engine and hope he can keep making his car work. "I could just keep in that bottom pretty good," he said. ... Brady Smith just missed his setup in time trials but rallied from ninth to second in his heat. "I didn't find anything wrong; I was wrong," Smith said.

Brian Shirley, driving Tim Lance's backup car, got the jump on polesitter Bobby Pierce and led him all 10 laps as the frontrunners broke away from the pack. Shirley had the race in hand most of the way, but when he got a bit too high in turns three and four on the final lap, Pierce noses underneath and finished just a length back. Shirley and Pierce transferred to the main event along with Charlie McKenna, who came out on top of a tight battle over Brandon Sheppard and Ryan Unzicker, who transferred. Tim Isenberg was sixth in the caution-free heat.

Brian Birkhofer won a feisty duel with fellow front-row starter Chad Simpson as they swapped the lead twice on laps four and five. Simpson finished just behind Birkhofer in a two-car breakaway in the 10-lap heat. Also transferring were Pat Doar, Jason Krohn and Jeff Provinzino. Birkhofer (outside) and Simpson (inside) ran side by side the first three laps, then Simpson edged ahead to lead lap four. Birkhofer appeared to take offense when Simpson slid in front of him on the frontstretch on lap five, bumping the rear of Simpson's machine. Then Birkhofer blasted into turns one and two on the high side, going back ahead for a lead he'd never give up. More sprinkles fell midway through the heat, but it appears to be just a few random raindrops.

Low-running Kevin Weaver muscled under polesitter Jimmy Mars on the third lap and led the rest of the 10-lap prelim that saw a few rain sprinkles develop. Mars lost the second spot to ninth-starting Brady Smith on a lap-eight restart while Randy Korte and Mark Dotson rounded out the top five, all transferring to the feature. Dotson slipped between Mars and Weaver exiting turn two on the first lap, threatening to take the lead, but Mars edged ahead while Dotson faded. Weaver worked underneath Mars, and while Smith got up to second late, he never challenged the winner. A lap-eight caution flew to get the ambulance out of the infield to tend to series director Sam Driggers, who was apparently struck in the head by a rock thrown from the track while watching in turn four, official Brad Hockaday said. He was brielfy treated by medical personnel but stayed at the racetrack. The first start was called back because Mars jumped the start and Dustin Griffin pulled out with apparent engine problems on the seventh lap.

Jimmy Mars of Menomonie, Wis, topped 31 qualifiers Friday at Cedar Lake Speedway in the second round of the 31-race UMP DIRTcar Summernationals. Mars turned a lap of 14.281 seconds at the 3/8-mile oval and will start on the pole of the first of three 10-lap heat races.

The top five finishers from each of three heat races transfer to the main event along with the top three finishers from a consolation race. Four provisional starters will be added to the 22-car field for the $5,000-to-win 40-lap feature.

Cedar Lake hosts a $10,000-to-win event on Saturday night. ... Tyler Reddick of Corning, Calif., is back in his own No. 11 after driving Steve Lampley’s No. 33 in the series opener. ... Kevin Weaver is making his first appearance at Cedar Lake since 2008’s USA Nationals. ... Rodney Sanders of Happy, Texas, and Jason Krohn of Slayton, Minn., are driving Krohn-owned team cars (Sanders is also competing in the USTMS modified action; that division drew 36 entries). ... Billy Moyer Jr. of Batesville, Ark., won both series races last year at Cedar Lake; he’s not entered this season because he’s chasing the Lucas Oil Late Model Dirt Series Rookie of the Year title and racing this weekend in Columbus, Miss. ... Three-time series champ Dennis Erb Jr. of Carpentersville, Ill., won Wednesday’s Summernationals opener at Brownstown, Ind.; he’s also following the Lucas Oil Series. ... The only entrants with previous series victories at Cedar Lake are Jimmy Mars (1996) and Brian Birkhofer (2010). ... An outlier entrant is Mark Dotson of Cameron, Mo., set to make his first-ever series start. ... Ryan Gustin is in the pits but competing only in the modified division for Gressel Racing.