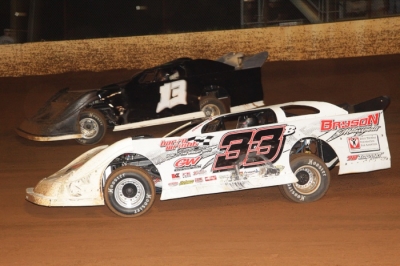 Eric Cooley (33) has a half-dozen victories over four weekends. (foto-1.net)

With six victories in the past four weeks, Eric Cooley is riding the best streak of his career. He’d like to add to it with a solid performance in this weekend’s Clash at the Mag at Magnolia Motor Speedway in Columbus, Miss.

While Cooley, 22, of Fulton, Miss., will certainly face some tough competition in the $20,000-to-win Lucas Oil Late Model Dirt Series event, he’ll at least do so with plenty of momentum. After getting a late start to the season, Cooley has won the past two Super Late Model weekly racing events at Magnolia’s 3/8-mile oval and added two more Super victories and a pair of Crate Late Model wins across town at Columbus Speedway during his recent hot streak.

“So far, this has probably been one of the best years I’ve had,” said Cooley, a former Crate Late Model standout who now splits time between both Crates and Supers for Bryson Motorsports. “We got a late start to the season, but once we got started everything’s just kinda fallen in place and our cars have been running great. Everything’s just been clicking for us.”

A former NeSmith Chevrolet Dirt Late Model Series champion, Cooley is no stranger to success. Still, the past few weeks have far surpassed any streak he’s had before. Cooley can’t quite pinpoint the source of his recent improved performance, other than finally finding some good luck.

“We’ve really just maintained what we’ve always done,” said Cooley, whose prior Super Late Model success includes the 2011 championship on Mississippi’s short-lived Promoters Racing Organization tour. “It’s just really been one of those years so far where everything’s finally rolling along really good. The monkey’s not been on our back and everything’s just fell into place at the right times.”

Cooley hopes things will continue to go his way this weekend. He’ll take all the luck he can get in facing the national travelers of the Lucas Oil Series.

Cooley knows how tough it can be racing against the tour’s regulars when they visit his home state. He’s made both of the last two Clash at the Mag feature lineups, but hasn’t made good of those feature starts with 17th-place finish in both races. This year, he hopes to change that with a solid run.

“I’ve ran Magnolia’s Lucas race the last two years, and we’ve been fortunate enough to make both races,” said Cooley. “The competition seems to get tougher each year. But we’re hoping we can go back and make the race again and shoot for a top 10 this time.”

If he is to find success this weekend at Magnolia, Cooley knows it all starts with time trials. Posting a solid lap time during Friday’s time trials and earning a starting spot near the front of heat race is crucial to a solid weekend.

“Qualifying is huge,” said Cooley. “If you get behind in qualifying, it’s hard to catch those guys. It’s really hard to make up for your mistakes, because they most likely ain’t gonna make any.”

Cooley is modest about his goals for the weekend, saying that he’d be happy to once again make the feature lineup and maybe come away with a top-10 finish. But if he can continue his streak of good luck, he feels he might have a shot at even better.

“I think we can really run with them if we have some things go our way,” said Cooley. “We’ve got a great car and a great shock package that we’ve got put together. If I can lay down a good (qualifying) lap and we have some luck the rest of the weekend, I think I have as good a chance as anybody to be there at the end.”

• At Dixie Speedway on June 8, Frank Ingram visited victory lane twice. The first time was to congratulate Ray Cook on his $3,000 Bill Ingram Memorial victory, a makeup race at the Woodstock, Ga., track honoring Frank’s late father. The second came during the night’s regular feature as Ingram drove the Buster Goss No. 24 to victory.

• On June 8 at Lucky 7 Speedway in Colson, Ky., Stephen Breeding earned $3,000 for a victory in the Millard Combs Memorial.

• At Winchester (Tenn.) Speedway’s SummerFest, Ronny Lee Hollingsworth of Northport, Ala., topped Tim Busha and Riley Hickman for a $3,000 victory on June 8.

• At Pittsburgh's Pennsylvania Motor Speedway, hometown driver Jim Stephans notched his first-ever Super Late Model victory June 8. “I lost the lead on a restart two weeks ago and I was determined not to let that happen again,” Stephan said.

• Cody Smith of Holt, Fla., won for the first time at Deep South Speedway in Loxley, Ala., on June 8, earning $1,500 in an unsanctioned Super Late Model special.

UMP DIRTcar (Crate Late Models): Aaron Heck of Mount Vernon, Ill., continues to lead the way with a healthy 192-point lead over Nick Lyons of Centralia, Ill., and Jeff Walston of Paducah, Ky., is another 10 points back in third.

AMRA: Reigning champ Chris Garnes of Evans, W.Va., has a 19-point lead over Andy Bond of Coolville, Ohio, while Ronnie Mayle of Chesterhill, Ohio, has moved to third, 72 points out of the lead.

ULMA: Justin Russell of Henley, Mo., continues to lead with 715 points, while reigning champ Jason Russell is just two points back in second. Chris Cox is third, 26 points out of the lead.

RUSH: John Over has taken over the lead in the chase for the first-year Crate Late Model organization’s $5,000 title, while Michael Lake, Garrett Mott, Joe Martin and Dennis Lunger Jr. complete the current top five.

Southern Ohio Speedway, Wheelersburg, Ohio (June 14): The third annual Southern Showdown pays $3,000-to-win for the 30-lapper; three other divisions also on the car and a lucky fan gets to wave the green flag for the main event.

Lincoln (Ill.) Speedway (June 14): The Midwest Big 10 Series is in action with four other divisions.

Northwest Florida Speedway, Blackman, Fla. (June 14): The $1,000-to-win event is the first Late Model race in more than two years at the track.