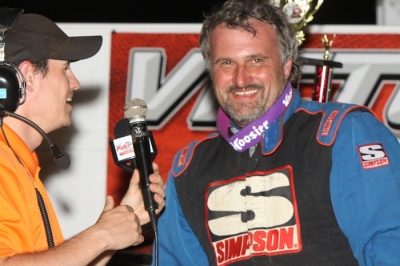 BROWNSTOWN, Ind. (June 12) — With a long way to go and 40 laps to get there, three-time series champion Dennis Erb Jr. of Carpentersville, Ill., was humming a winning tune at the conclusion of Wednesday’s UMP DIRTcar Summernationals opener at Brownstown Speedway. | Complete Summernationals coverage

Scheduled to start outside the ninth row, Erb picked his way toward the front, jumped into third after a lap-28 restart, then tracked down Jason Jameson of Lawrenceburg, Ind., with five laps remaining for a $5,000 payday and his 17th career victory on the 31-race tour.

“I knew we could get up to the front. I didn’t know the way the race was going to play out there, how soon we could get up there. Luckily we were able to get there enough to challenge for the lead,” said Erb, who struggled in his heat race at a track where he captured the Lucas Oil Late Model Dirt Series-sanctioned Indiana Icebreaker in March. “From the drop of the green there, the car worked better, and as the race got longer, the car got better, and we were able to move on up.”

Jameson overtook race-long leader Mike Jewell of Scottsburg, Ind., on the 26th lap and appeared as if he might run off and hide, but the yellow for a Tim Rivers spin in turn four two laps later bunched the field and helped Erb’s charge.

“We sure didn’t need that last caution there. There toward the end, it got a little loose coming off the corner there. I think he went with a little harder tire than we did,” said Jameson, who ran the high side most of the way. “Once (Erb) got around me, I went down there and tried it, but that (softer tire) didn’t have nothing for down there in the black.”

Jameson, looking for his first-ever series victory, settled for second while ninth-starting Shannon Babb advanced from the 11th starting spot to finish third on steamy evening at the quarter-mile oval in southern Indiana. Bobby Pierce of Oakwood, Ill., was fourth and Jewell, who started outside the front row and led 25 laps, rounded out the top five.

Despite missing a transfer spot in a heat race that forced him into the B-main, Erb found Brownstown’s oval to his liking once again.

“The car’s just working real good here. We basically came here with pretty much the same setup that we had earlier this spring. Just everything worked out for us,” said Erb, fresh off a runner-up finish in Eldora Speedway’s Dream XIX that paid $20,000. “We’re working on no sleep here. We worked ever since we got back from Eldora on both of our cars getting 'em ready, and made it here just in time to race. (Crew chief Heather Lyne has) been working around the clock also and putting in a lot of hard hours. I can’t thank her enough.”

Jewell took control at the outset and had straightaway lead after five laps with Steve Francis of Ashland, Ky., subbing in Jason Smith’s No. 25s, giving chase along with the seventh-starting Jameson. The frontrunners entered lapped traffic after 10 laps and three laps later, Jewell made contact with the slower car of Tyler Reddick — the Steve Lampley-owned No. 33 — sending Reddick around.

Jewell and Jameson kept rolling, but Francis caught a piece of the action, flattening his right-rear tire; he ended up calling it a night.

On the restart, Jewell kept Jameson in check past the midway point of the 40-lapper, but Jameson worked underneath the leader exiting turn four on lap 26 to take command. Two laps later, the second and final caution appeared for Rivers.

While Jameson stretched his lead on the restart, Erb was suddenly in the mix, dispatching Jewell and Randy Korte of Highland, Ill., and setting his sights on Jameson. They ran side-by-side with five laps remaining with Erb’s lower line eventually winning out. He pulled away to win by nearly a straightaway.

Series regulars get a quick day off on Thursday before two nights of action at Cedar Lake Speedway in New Richmond, Wis. Friday’s feature pays $5,000-to-win while Saturday’s pays $10,000-to-win.

Notes: Erb’s Bloomquist Race Car is sponsored by JL Scrap Metals, Allstar Performance, Petersen Aluminum, PRC and J.R. McBride Leasing. .. His previous series victory came last season at Clarksville (Tenn.) Speedway. ... Although Erb has followed the Summernationals most of the last 10 seasons or so, he’s committed to the Lucas Oil Series this season, where he’s a three-time winner. ... Only one heat race winner (Jewell) finished among the top five. ... Provisional starter Scott James drove Tim Prince’s No. P1 after wrecking his No. 1G in a heat race; James finished 17th. ... Polesitter Jason McBride of Carbondale, Ill., slipped back to an eighth-place finish. ... Jerry Lierly scratched from the main event because of a faulty fuel pump.

Outside front-row starter Daren Friedman won the B-main to transfer to the main event along with Dennis Erb Jr. Erb ran third most of the way, but he worked under Tim Prince in the late stages to get the second transfer spot. Prince settled for third and showed a little displeasure on the cool-down lap. The race was slowed by a single caution for Tyler Allen's lap-two spin.

In the redraw among heat winners, Jason McBride drew the pole with Mike Jewell alongside. Brandon Sheppard and Tim Rivers start on the second row of the 40-lap feature. ... Ryan Unzicker won the C-main over Alan Magner, Tyler Allen and Caleby Ashby. .... The following B-main, which sends two drivers to the main event. ... Four provisionals are added, two from last year's series points, one from last year's UMP weekly points and one of the track's choice.

Jason McBride led all in the final 10-lapper, sticking with the low groove to hold off Randy Korte in a rough and tumble race. Tim Lance was third while the fourth and final transfer spot went to Justin Rattliff, who earlier had been put to the tail for rough driver. Chris Shelton lost the fourth spot on the seventh lap and ended up fifth. The first start was called back after banging in turn two sent Scott James spinning. A lap-three caution appeared when Rattliff rear-ended James exitng turn two, and the spinning James collected Greg Johnson, forcing both cars to be towed away.

Polesitter Tim Rivers controled the 10-lapper, keeping fellow front-row starter Tyler Reddick in check early and racing to victory. Seventh-starting Jason Jameson picked his way to third early, then slipped under Reddick exiting turn four on the last lap to grab the second spot. Third-starting Dennis Erb Jr. got too high exiting turn two on the third lap and fell back to fifth. He muscled his way back to fourth, but sponsor Jerry Lierly got under him before a lap-seven caution to grab the final transfer spot. Tyler Allen spun in turn three for the race's lone caution.

Working the outside groove, Mike Jewell went around polesitter Steve Francis on the fourth lap and cruised the rest of the 10-lapper. Francis couldn't keep up in finishing second just ahead of Kevin Weaver, who fought off Shelby Miles. The top four transferred while Daren Friedman was further back in fifth. Chad Stapleton stopped on the backstretch with nosepiece damage to draw a lap-two yellow.

Polesitter Brandon Sheppard stuck with the low groove and outran Bobby Pierce to win the first series heat of the season. Pierce was a few lengths back while Shannon Babb was a half-straight back in third. Rodney Melvin was a distant fourth and got the fourth and final transfer spot.

Francis will start on the pole position of his heat race after clicking off a 14.842-second lap at the quarter-mile oval. Other heat race polesitters after group qualifying: Brandon Sheppard of New Berlin, Ill.; Tim Rivers of Salem, Ind.; and Jason McBride of Carbondale, Ill.

Francis is making a rare series appearance in the Barry Wright Race Car owned by Jason Smith of Seymour, Ind.

The tour is guaranteed to have a different series champion with last year’s champ Brian Shirley focusing on crew chief duties for fellow Illinois driver Tim Lance; Shirley plans to drive Lance’s backup car in weekend races. .... Former tour champions entered included Dennis Erb Jr. of Carpentersville, Ill., Shannon Babb of Moweaqua, Ill., Kevin Weaver of Gibson City, Ill., and and John Gill of Mitchell, Ind. ... Besides Steve Francis, another driver in an unfamiliar car is Tyler Reddick of Corning, Calif., the DuQuoin, Ill.-based driver fielding Steve Lampley’s No. 33 Barry Wright Race Car. ... While former champs Erb and Gill are among drop-ins, drivers expected to follow the tour include Babb, Bobby Pierce, Dustin Griffin and Lance. ... Chris Streeval of Edinburgh, Ind., was a late arrival and the final entrant. ... After pleasant temperatures in the region the past few weeks, it’s the hottest day of the year in Brownstown with temperatures rising into the 90s. “The Hell Tour starts,” cracked series official Brad Hockaday,” and we’re up to 92.” ... Temperatures should be cooler for the next two series events at Cedar Lake Speedway in New Richmond, Wis. The series takes Thursday off before $5,000- and $10,000-to-win evenst at Cedar Lake on Friday and Saturday.