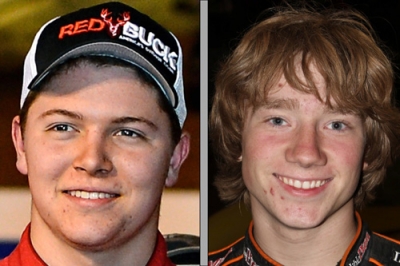 School’s out for summer, but two rising-star teenage drivers are ready to continue their education – their Dirt Late Model education — by spending the coming weeks attacking the UMP DIRTcar Summernationals.

When the so-called Hell Tour kicks off its grueling schedule of 31 races in 39 days Wednesday at Brownstown (Ind.) Speedway, Tyler Reddick and Bobby Pierce — talented youngsters racing out of shops in the hear of UMP country — will embark on the racing odysseys of their lives.

Neither Reddick, the 17-year-old Corning, Calif., driver who races out of DuQuoin, Ill., nor Pierce, 16, of Oakwood, Ill., can really be considered newcomers to the Dirt Late Model division; Reddick has been running an almost exclusively national schedule since 2009 and Pierce has been steadily raising his competition level since ’10. But focusing on the Summernationals is a new challenge for both fresh-faced kids, who will combine to give this year’s expanded Hell Tour an intriguing infusion of youth.

“I’m looking forward to running the Summernationals,” said Reddick, who made his Dirt Late Model debut in 2009 by traveling the World of Outlaws Late Model Series and from 2010-12 was a regular on the Lucas Oil Late Model Dirt Series. “It’s definitely gonna be fun — and, as they say, it’s the Hell Tour, so I’m sure it’s gonna be hell at times as well.

“Running that many races in such a short amount of time is something that not a lot of people get a chance to do, so I think it will be a good experience for me and my dad (Clarence). Being in DuQuoin, we’re in a good location to run the series, so we’ve been thinking about doing it for awhile and I think this is the year to try it.”

Pierce is equally excited about making a serious Summernationals assault for its $25,000 championship prize. His family-owned team even decided last week to step off the Lucas Oil Series, which Pierce has been chasing this season as a Rookie of the Year candidate, to concentrate on the Hell Tour.

“It’s really hard to pass up running the Summernationals,” said Pierce, who got a major taste of the Hell Tour last year when he entered about three-quarters of the events. “A lot of the tracks are only a few hours from my house and I’ve raced a lot at some of them, too. The competition is ridiculously tough, but being familiar with the tracks gives me confidence that I can get some good finishes.”

While Pierce has virtually grown up on the UMP circuit — his father and chassis builder, Bob, is a former weekly UMP champion — Reddick will blaze new trails as he hits the Summernationals road. Despite living in central Illinois since his family relocated from their native California so Tyler could pursue his racing career, he never entered a single Summernationals event during his first four seasons behind the wheel.

But this year Reddick isn’t following the Lucas Oil Series, so for the first time he’s been active in his adopted home state. He’s already raced at six tracks that appear on this year’s Summernationals schedule — Highland, Quincy, LaSalle, Tri-City and Jacksonville in Illinois and Iowa’s 34 Raceway — and in those six starts he has accumulated four top-five finishes (a second-place run on June 2 at Jacksonville is his best).

Reddick has found that he’s very comfortable racing at the ovals, which bodes well for his Summernationals assault.

“Honestly, I see the UMP Summernationals tracks as more cushion-banger type deals,” said Reddick, whose equipment is fielded by his grandfather and wrenched by his father. “That’s something my car (Team Zero by Bloomquist chassis) hasn’t been too bad at, and it’s what I like driving on most. I just like that style of racing. It’s my favorite. Right now I’m more suited toward a hooked-up track so I’m definitely looking forward to the Summernationals.”

Reddick has just one feature victory on his Dirt Late Model resume, a Lucas Oil Series score at Florida’s East Bay Raceway Park in February 2011 when he was a shaggy-haired 15-year-old. But he’s been knocking on the door to victory lane this year — in addition to Jacksonville two weeks ago, he has runner-up finishes on Feb. 13 at East Bay (Lucas Oil Series) and May 23 at Lucas Oil Speedway in Wheatland, Mo. (MLRA) — and is hopeful that the Summernationals will serve as his breakthrough.

“When you’re running World of Outlaws, Lucas or really any show that’s $5,000-to-win or more — which is mostly what we’ve run since I’ve been racing — you’re never gonna catch a break,” said Reddick, who has also won on pavement after capturing a NASCAR K&N Pro Series event at Rockingham (N.C.) Speedway last fall (he’s been making some stock-car and truck appearances on asphalt in hopes of furthering his career). “There’s always gonna be a lot of guys there with a serious chance to win, a lot of guys who have been doing it a long time. That makes it tough for young guys like me and Bobby to get a win. It’s tough to figure everything out.

“But we’re gradually getting closer (to winning races) — and hopefully once we get there, we can stay there. We just have to put everything together.”

The day-in, day-out racing routine of the Summernationals is something Reddick is ready to embrace.

“We’ve just been picking-and-choosing this year, so honestly I feel like I haven’t raced enough,” said Reddick, who will travel the Hell Tour with his parents and younger sister and receive assistance at selected events from crew members Jason Cooper and John Hamel. “I’ve gotten to hate just sitting at home and not racing. I like racing every day. I love going to East Bay and Volusia in February and racing every single day, so I think this is something I’m really gonna enjoy.”

Pierce, who just completed his sophomore year of high school, also loves the busy Summernationals schedule, which this year has been stretched to nearly six weeks of competition to allow for several off days amid a record number of races.

“It’s just non-stop racing,” said Pierce, who, like Reddick, will make the Summernationals a family affair with his father, mother Angie and older sister Ciara by his side. “Working on the car during the day and then racing at night — you just do that every day, and you skills get so much better.”

Pierce enters the Summernationals coming off a rough stretch of racing highlighted by the worst crash of his career, a wild series of flips in a Lucas Oil Series event on May 31 at Tazewell (Tenn.) Speedway. He escaped injury in the wreck, but his car was a virtual write-off save the engine and some other assorted parts, so his father’s chassis-building team has had to quickly put together a new machine to give Bobby two cars.

Pierce has already enjoyed successful runs on the Summernationals, finishing a career-best second last year at Kankakee County Speedway in Kankakee, Ill. He also owns 13 career Dirt Late Model feature wins (six in ’11, six in ’12, one this season), including victories at five tracks (Kankakee, Tri-City, Fairbury and Tri-City in Illinois and Federated Auto Parts Raceway at I-55 in Missouri) that will host series events.

With the added experience he gained running nationally with the Lucas Oil Series this year, Pierce figures to be ready to battle for checkered flags with a talented group of Summernationals hopefuls led by former series champions Shannon Babb of Moweaqua, Ill., and Brian Shirley of Chatham, Ill.

There will be plenty of others to contend with, including former UMP weekly champs Ryan Unzicker of El Paso, Ill., Randy Korte of Highland, Ill., and Kevin Weaver of Gibson City, Ill.; Brandon Sheppard of New Berlin, Ill.; Jack Sullivan of Greenbrier, Ark.; Frank Heckenast Jr. of Orland Park, Ill.; and Walker Arthur of Forest, Va., who plans to make his Hell Tour debut by hitting a large portion of the schedule.

“To run with the guys (following the Hell Tour) you gotta be almost perfect on your game,” said Pierce. “The car’s gotta be at its best for the track conditions, and as a driver you gotta learn to know what that track’s gonna do. That’s one of the things when you first start racing — you don’t pay attention to the track surface enough. As you get racing more and more, you start to look at the track and start to realize that, Hey, If I slow down just a little bit and get into the traction line a little bit more, it’s gonna make me faster. That’s something you definitely pick up faster when you race every night.”

And if everything goes right for Pierce? Well, then he’d be able to join his father, the 1992 series champ.

“It would be really cool to win (the Hell Tour),” said Pierce. “These days, with the competition so tough, to win even a race on the Summernationals is a big accomplishment. So to win a championship — man, that tells a lot about you. You gotta have a lot of consistency to do it — your car’s gotta be running right, you gotta have your head in the game, you gotta run every lap hard.

“You have to earn a championship, and that’s what we’re going to try to do. If we could pull it off, it definitely would be really cool.”