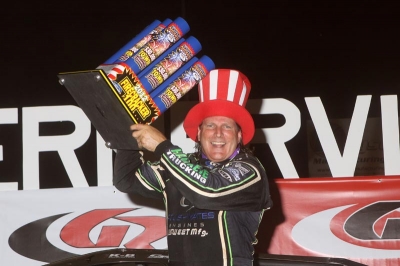 DirtonDirt.com has announced a partnership with DIRTVision.com to provide a live video broadcast of the seventh annual Firecracker 100 Presented by GottaRace.com at Lernerville Speedway in Sarver, Pa., June 27-29. The two online broadcast providers will produce a pay-per-view broadcast of the Firecracker 100’s three full racing programs for the World of Outlaws Late Model Series with both websites broadcasting the event live to worldwide audiences.

Three nights of racing at the crown jewel event kicks off Thursday, June 27 with the first of two preliminary event programs, highlighted by a $6,000-to-win World of Outlaws feature. Another $6,000-to-win preliminary program is set for Friday, June 28 before a full slate of heat races, consolation races, the Uncle Sam 30 non-qualifiers’ race and the 100-lap, $30,000-to-win Firecracker 100 main event on Saturday, June 29.

World of Outlaws announcer Rick Eshelman will be joined by legendary Lernerville Speedway announcer Dow Carnahan to call all of Lernerville’s action with each night’s broadcast also featuring pre- and post-race shows, driver interviews throughout the event and instant replays of all of the thrills and spills.

"We’re extremely excited to have DirtonDirt.com onboard for the Firecracker 100 broadcast to help bring this great event to an even larger audience," said Brian Dunlap, media director of DIRTVision’s parent company World Racing Group. "DIRTVision.com and DirtonDirt.com worked together for a successful UNOH DIRTcar Nationals broadcast, and it's really exciting to have the opportunity to work together on another major event. We are really looking forward to bringing great live coverage of one of the year’s biggest races to fans all around the world through DIRTVision.com and DirtonDirt.com."

Pay-per-view orders for the Firecracker 100 broadcast can be placed now by clicking here. Prices for Thursday and Friday’s broadcasts are set $18.99 apiece, while Saturday’s finale is set at $21.99. DirtonDirt.com subscribers can order a complete three-day package at the reduced price of $42.99, while non-subscribers also receive a discounted three-day price at $45.99. Non-subscribers receive a free one-month DirtonDirt.com subscription with their pay-per-view order.

Since the inaugural event in 2007, the Firecracker 100 has grown to become one of Dirt Late Model racing’s biggest annual races. The crown jewel event attracts impressive fields of competitors to Lernerville’s half-mile oval each year and boasts a list of previous winners that includes some of the sports top drivers. Defending race winner Scott Bloomquist of Mooresburg, Tenn., joins Jimmy Mars of Menomonie, Wis., as the only two-time winners of the Firecracker finale, while Brian Birkhofer of Muscatine, Iowa, and Shane Clanton of Zebulon, Ga., have both won the event once.

For more information about the Firecracker 100 Presented by GottaRace.com and Lernerville Speedway, visit www.lernerville.com.

Visit www.DirtonDirt.com for the latest Dirt Late Model news and for video highlights of special events. For information on all DirtonDirt.com live video broadcasts, visit www.dirtondirt.com/liveEvents.php.