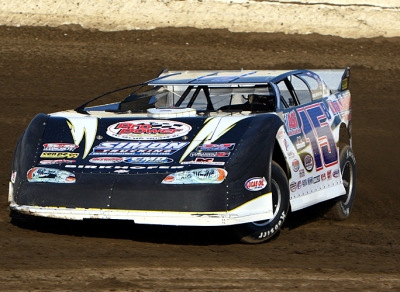 FARLEY, Iowa (May 16) — Celebrating his older son Cruz's sixth birthday, home-state driver Brian Birkhofer of Muscatine grabbed the lead from Brian Shirley on the 30th lap and fought off Shirley the rest of the way to to win the Banner Valley Hauling 50 at Farley Speedway. Birkhofer earned $10,000 for his first Lucas Oil Late Model Dirt Series victory in more than a year. | Slideshow

Shirley, of Chatham, Ill., had a six-length lead over Birkhofer and Dennis Erb Jr. of Carpentersville, Ill., when a caution came out with 29 laps scored. On the restart, Birkhofer powered to a lead he'd never give up. Shirley cut Birkhofer's sizable lead down with less than five laps remaining in the race and tried valiantly a couple of times to pass Birkhofer, but Birkhofer held on for his seventh career Lucas Oil Series triumph in his new chassis Birkhofer designed with the Wisconsin-based team of Jimmy and Chris Mars. Shirley has his best series finish of the year crossing the line in second followed closely by Erb, Billy Drake of Bloomington, Ill., and new series points leader Steve Casebolt of Richmond, Ind.

Bart Hartman of Zanesville, Ohio, four of the first five laps until fifth-starting Billy Moyer of Batesville, Ark., took over on the sixth lap after leading lap two. Moyer built a comfortable lead in traffic until a fateful lap-21 caution. On the restart, Shirley tried the inside line of the track into turn one but slid up and made contact with the leader. The resulting damage knocked Moyer's No. 21 out of the race while Shirley restarted on the point after Hartman departed with a flat tire.

Notes: Birkhofer is sponsored by Daufeldt Transport and J&J Steel. ... It's his second victory of the year overall; he won the May 4 World of Outlaws Late Model Series event at Monett (Mo.) Speedway. ... The event marked a series switch for some drivers. Billy Moyer had been leading the World of Outlaws points, but he had never committed to running the full series and skipped May 16's event at Attica (Ohio) Raceway Park to run in his native state. Donnie Moran, meanwhile, had run with the Lucas Oil tour since 2005 until missing last weekend's event in Wheatland, Mo., and skipped the Farley race to run at Attica. ... Runner-up Brian Shirley also had been following the WoO tour but opted to stay closer to home. "It's tough for a guy like me to run around with the luck we've been having this year," Shirley said. "To come in here tonight and be a contender to win it feels really good. Right now economically, it's just hard, and we're going to do some other things this year, but we're still going to run the Outlaws, it was just tough to go to Attica tonight and then not get (to run at cancelled) Lawrenceburg (Ind.) tomorrow. ... for us it didn't make a lot of sense." ... Moyer lowered the track record on the half-mile oval with an 18.775-second lap. ... Seven cautions slowed the 40-minute feature. ... Provisional starters were Earl Pearson Jr. and Justin Rattliff. ... Pearson started 23rd and rallied to finish ninth. ... The series heads to La Salle, Ill., for a May 17 event.