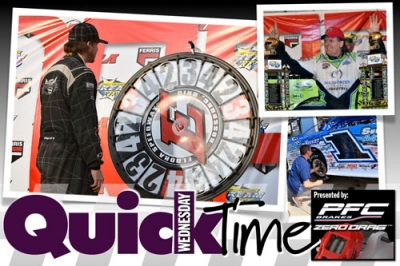 National: Winless since February, Scott Bloomquist of Mooresburg, Tenn., backed up a confident prediction by earning his sixth $100,000 victory at Dream XIX presented by Ferris Commercial Mowers at Eldora Speedway.

Turn 1: Dream XIX by the numbers

0: Car number of winner Scott Bloomquist, who collected a $100,000 Dream victory for the sixth time.
1: Driver with a backup car (John Blankenship) making the feature lineup.
2: Teenagers in the starting field: Tyler Reddick and Devin Moran.
3: Bloomquist Race Cars among the top five finishers, a feat not accomplished since Rocket in 2007.
4: Provisional starters going to the fastest four qualifiers after none could overcome the six-car inversion.
5: Years that Scott Bloomquist had gone without winning at Eldora Speedway, a stretch second behind a 1995-2001 drought.
6: First-time starters: Jon Henry, Wayne Chinn, Mason Zeigler, Chris Simpson, Gregg Satterlee and Devin Moran.
7: Lead changes in the first preliminary feature’s 25 laps.
8: Chassis brands represented in the feature field, led by eight for Rocket Chassis.
9: Laps remaining when second-running Matt Miller broke a driveshaft; he’d won two preliminary features.
10: Drivers 40 or older among the top 10 finishers.
15: States represented in the starting field, led by Ohio with four drivers.
22: Laps led by polesitter Tyler Reddick, who lost power and retired.
28: Feature starters, an event record.
32: Pounds that Josh Richards was light at the scales, stripping him of a third-place finish.
36: Laps led by winner Scott Bloomquist.
42: Laps led by Jimmy Mars, who was shuffled back to sixth in late-race restarts.
84: Entries, the fewest in event history.
200:
Feature laps turned during the three-day event, including two 25-lappers apiece on Thursday and Friday.
304,000:
Event-record dollars in total purses distributed.

• Best observation by Dream XIX announcers Dustin Jarrett and James Essex at Eldora Speedway: The six-car field for the C-main scramble was made up of drivers from three countries. There's no better duo to report on such an international incident.

• There are few Dirt Late Model drivers with the initials “K.K.,” but two of them finished third and fourth Saturday at North Georgia Speedway: Kenny Kizzar and Kolby Kilgore. That’s krazy!

• At age 84, California veteran Larry Damitz was back in action over the weekend, scoring a third-place finish in Limited Late Model action at Placerville Speedway. His age likely far exceeded the combined ages of the drivers finishing ahead of him.

Short-track racing suffered losses in recent days with the deaths of an inspirational Illinois modified racer and a photographer who frequently contributed to DirtonDirt.com and other outlets.

Gary Cook Jr. of Deer Creek, Ill., a former UMP DIRTcar modified champion, died Sunday in Peoria, Ill. He was 37. The successful driver of the No. 64 touched nearly everyone in the Illinois racing community with his courage and determination during his lengthy battle with cancer. “Today the racing world has lost a true champion,” Peoria Speedway tweeted among hundreds of supportive social media messages about Cook’s death.

Jeff Eissing of West Harrison, Ind. — known in the photographer community as Photojeff — died last week, also of cancer. He was 49. Eissing was a longtime photographer at Florence Speedway in Union, Ky., among other photo gigs, including shooting for the legends racing sanctioning body, FAST Midwest. “His view from behind the camera lens will be missed by all of us,” the series wrote on its website.

Austin Hubbard (‏@hubbard11) after his less than satisfying Dream XIX weekend at Eldora Speedway: "Maybe at the world 100 I wont hit the wall in both rounds of qualifying and in the b main ...”

June 15, 1996: Dale Harris of Decatur, Ark., earned his first career MLRA victory, going flag-to-flag to win $2,750 at Tri-State Speedway in Pocola, Okla. Ken Essary put heavy pressure on Harris early in the 40-lap event but couldn't get past and settled for second spot, his best series finish since returning to full-time racing after a two-year hiatus.

June 14, 2003: Richard Underwood of Columbus, Miss., one of Mississippi's biggest supporters of Dirt Late Model racing, died. His Rick's Furniture has sponsored many racers and events for years, and gave its name to the Rick's Furniture Series, which ran six seasons through 2001. Johnny Stokes, John L. Cliett, Robbie Starnes and Steve Russell were among Rick’s Furniture-sponsored drivers.

• A previous UMP DIRTcar Summernationals champ will take the title.

• The tour will have a record 17 different winners.

• There will be five first-time series winners.

• Only one driver will manage back-to-back victories.

(Last week: One out of five Dream XIX predictions correct)